The Empire By Moon and Stars

You are using an out of date browser. It may not display this or other websites correctly.
You should upgrade or use an alternative browser.
Threads for members of the The Empire group 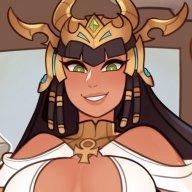 ...Some days after the Tower of Tribulations...

​
Numbers were one thing, but progress was another. With new recruits in the fold, Medja could turn her attention to the next step: acquiring the means by which she'd preform her miracle. That meant that sitting still and serving as an administrator from the comfort of the Imperial palace was no longer going to be an option. While she'd have to rely on her Hands even more than before to take care of both her usual duties, their own responsibilities, and much the hunt that would soon be beginning, the Vizier of Stars found herself getting excited at the prospect of venturing out into the world again. Of course, for that to happen she'd need even more assistance.

Her days spent in Annuakat hadn't all been spent simply handling paperwork and acclimating to the duties of Empress she'd soon be responsible for. On the contrary, she'd been researching. Liadain was rife with magical artifacts, her long-dead master being one of the most prominent in leaving powerful relics behind. Such things were well hidden and even more well protected, however. It would be impossible to track down everything she needed to seal the Dragon's Scar in a reasonable timeframe. Thankfully, her research had been fruitful in finding her the means to that end: one of the artifacts of Aramekh, created alongside the very Fists that accompanied her now.

She knew that she'd need to retrieve this particular relic to proceed, that much she knew. The problem, however, was its potential, supposed location...somewhere in the Nahas Ocean, far off the coast of the Trident. The sea was...not exactly Medja's most comfortable environment, and the exact location of the artifact had yet evaded her.

To that end, Medja called those who she thought could help most: Hands, both old and new; associates she'd met in her time in Annuakat; and most importantly, the one person she knew would be the most valuable in this situation...the Vizier of the Moon and Princess of the Mchawi, Noelani. Those who were invited were asked to meet Medja at the docks in Annuakat so that they could be briefed on the nature of what would follow...
Reactions: Noelani, Haze and Ashuanar 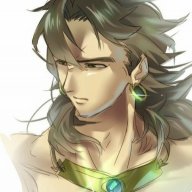 Vizier of the Imperial Army

The ocean in the air was oddly comforting to him. It didn't remind him of any memory from his home, some distant recollection of a time well spent. No, it was foreign to him. Refreshing. Every time. It was likely why he enjoyed Annuakat so much when he came, it was all still so new, even after so long. As the Sun he shone his eye out over all the Empire, commanding their army to and fro. Rare it was for him to look upon the Moon and Stars, and often from the distant horizon it was. Today was not such a time.

Footsteps on the dock.

He approached, alone, and garbed in the full attire of white cloth as all his assassins and Sipahi wore - only the golden armband distinguished him from any of they.

He had received no invite, but he felt he required none. His place would have him defend Gerra with his life, and with Medja in his stead, his position obligated him. That was however, simply more convenient. Even if that weren't the case, he intended to embark with her on whatever quest she'd taken up regardless. His duties, meanwhile, would be left in his captains' capable hands.

He came to a halt a few meters away, and addressed her, "Empress," he bowed his head, "I would accompany you." 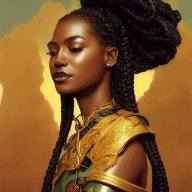 Vizier of the Moon

Children's laughter cut through the usual din of dock work. The men and women unloading crates or repairing their riggings cast curious glances over to where the noise was coming from and allowed the odd melody to sooth the harsh sea-crusted lines of their face. Work went on but there was less urgency to it now and idle chatter broke out amongst some groups; an oddity indeed for the docks.

The cause of the disruption was down on the sands beneath the large wooden docks. Children who worked up above had been lured away by the curious woman who had been seen playing with the water itself. The first girl to have spotted her, Niamhi, had rushed off to tell Farrock who had told Zena who had told Ghazi who had told... Well it didn't matter who he had told, Niamhi was the one who had found her and she stood in the midst of the group of gawping children grinning like a Cheshire cat. Watching this was far more fun than working with mumma and who could tell her not to admire one of the Vizier's?

Noelani laughed huskily but swept her hands up and the waves followed, shifting from the form of a dog into that of two birds that swooped and dived above the children's head much to their delight. She hadn't sought out the audience but she didn't mind it either. Whenever she visited the city everyone seemed so serious; something that was incredibly at odds with her islands. If she could bring a little bit of amusement to their day then so be it.

Lani arched a brow but then sucked in a deep breath. The ships bobbed unsteadily as the waves rushed in and then bubbled beneath her feet, lifting her higher into the air as it writhed beneath her. The feet took shake first, followed by its belly, then its head, tusks and ears. The seawitch herself was perched on its back having risen into the air as the water creature had grown. The children whooped below just as she caught sight of the person she had come to meet, now she was level with the docks.
Reactions: Ashuanar and Medja

Many might've found it difficult to recognize the Vizier of the Sun from his subordinates given his preference for covering himself and wearing relatively mundane garb. Not Medja. She knew him by his very footsteps, his gait, his voice. She felt his approach and, even among the refreshing sea breeze and ever harsh sun above, she felt a familiar warmth fill her chest.

The sorceress turned and smiled at his greeting. The grand general was certainly not an expected arrival, but Medja would never turn away his presence.
"Good day, dear Sun," She returned his greeting, happy and assured that his presence would be a great boon. "You're more than welcome to. In fact, I think this little expedition will be all the better for it."

It wasn't long before the commotion of children trailing Noelani caught Medja's ear. The Stars knew the Moon was a whimsical thing, but to see the admiral of the Imperial navy giving an impromptu circus to the local youth was...somehow inspiring. Were there any substantial amount of sand or stone nearby to move without causing wanton destruction in the process, Medja might've joined in on the show. Alas, both time and order took precedence over whimsy.

Still, Medja offered a joyed wave to her fellow Vizier as she approached atop her liquid loxodon. With three Viziers working in tandem, their success was all but certain.

"Not much longer now, I should think..." Medja thought aloud to no one in particular. With any luck, the small collection of ships Medja had pulled together and allocated to this particular affair would be ready to set sail.
Reactions: Noelani

Vizier of the Imperial Army

Medja said:
"Good day, dear Sun...
...You're more than welcome to. In fact, I think this little expedition will be all the better for it."
Click to expand...

Though his garb covered his mouth, his eyes clearly showed his smile. He bowed his head graciously once more at her approval before his attention too was turned to the next to arrive - the sea witch, Vizier of the Moon, Noelani. Her ways were very unlike his, but he found no fault in them and could appreciate the sense of wonderment she managed to inspire in not only the children but the dock-hands as well. Times were few and far where the heart could feel light.

He extended a wordless but friendly gesture of greeting to her before his eyes turned toward the ships moored there. There were not many, but certainly enough to generate some attention. A small fleet of Imperial ships was still a fleet of Imperial ships - no doubt this excursion would be noticed by a number of potentially threatening sights. He would have to keep himself alert.

"I've never spent much time at sea..." he said somewhat quietly as he looked up at the masted vessels.

Vizier of the Moon

"It is not all that different to the sands, just a lot less tiring on your feet."

Upon seeing those whom she had come to meet, Noelani had bid the children goodbye with a small wave before turning the water beneath her into a series of delicate little steps which she took down to the dock. Once on the firm wood the water wormed its way back into the sea like a tentacle of some great sea beast.

In preparation for the voyage they were about to take the Mchawi Princess had braided her hair into a series of delicate plaits decorated with beautiful yet simple beads. Her outfit was the traditional one of the Namaka; a blue skirt and matching top that looked to be made of some sort of leather but upon closer inspect was actually made of scales like that of a fish. It's armour like quality combined with its resistance to water was what made it so highly sought after by her people. The ceremonial dagger at her hip gleamed in the sun and as always she appeared bare-footed.

Graciously she fisted her hand over her heart and bowed causing the Ocean Stones in her ears and about her throat to glitter.