“Have you ever seen them Melkhar? The blue walls, rising up from the green delta of the Baal-Duru like a mighty wave. In the sun, they shine like sapphires. Melkhar, if Alliria is the jewel of the East, then Annuakat is the gem of the West."

Of the Seven Great Cities of Amol-Kalit, Annuakat is perhaps the largest. Known for producing vast amounts of grain, it is the bread basket of Amol-Kalit due to its position on the fertile floodplains of the Baal-Duru, where the river runs into the Gulf of Annuak. 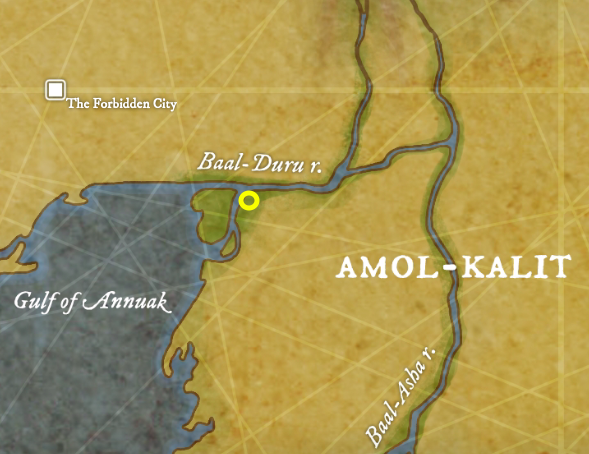 
A sprawling metropolis, people of every tongue and tribe dwell within Annuakat, though most permanent citizens are Kaliti humans. The denizens of Cerak at'thul are welcomed in port, for they often bring in hundreds of fresh slaves. The vast majority of the slaves were non-humans. Prior to Gerra's conquest of Annuakat, a council of thirty noble princes known as the Marya ruled over the city, all of them Kaliti humans. After his conquest, Gerra declared himself Sultan of Annuakat and reorganized the Council of Thirty. He began appointing viziers to the council, the majority of whom were Sand Elves. However, the Marya who swore fealty were allowed to retain some of their power as princes of Annuakat.

The land is divided into nomes and the princes who rule over each nome are known as nomarchs.

The influx of a large number of nomadic Sand Elves, whose primary profession is raiding, has resulted in friction with the inhabitants.

The population of the city itself is made primarily of merchants and craftsmen, such as linen makers, but a vast number work outside the city walls as farmers on the banks of the Baal-Duru.

When travelers speak of Annuakat, they speak of a land of abundance. Although much of Amol-Kalit is desert, here the arable soil is rich and capable of being cropped more than once a year through strict laws on the rotation of the fields. Emmer wheat and barley are produced in vast amounts, but so too are dates, figs, lettuce, lentils, and many others. The high yield of the farmlands results in a significant excess in years of plenty, which are stored in the city's granaries. Alongside the edible crops are grown others, such as papyrus and flax. The papyrus is woven into sandals, rope, and paper, while the flax is spun into linen clothing by craftsmen in the city. The emmer wheat is likewise turned into bread by the many city bakers, or beer by brewers.

The Baal-Duru river itself is filled with all manner of fish and fowl, which are hunted from shore or on pole barges that range up and down the river near the city. In some areas, the reeds are filled with hippopotamuses and crocodiles. Hunts are organized, mostly by the nobility, in order to take down such beasts.

The farmable land is owned primarily by the Marya, or newly appointed Abtati nobility, or the Lector-Priests of the Annunaki and farmed by commoners.


While the blue walls of Annuakat are certainly impressive, it is its agricultural advances that catch the eye. Over hundreds of years, many canals have been dug, bringing water from the Baal-Duru to irrigate more and more land. Thus the land surrounding Annuakat is lush and verdant with palms and flora.

The Blue Walls – Built a century ago by King Unas, the walls are formed of enormous stone blocks transported to Annuakat by river barges from the quarries. The walls themselves were costly to build, but what King Unas did next nearly bankrupted his kingdom. He ordered the walls to be painted blue, a feat which could not be accomplished without vast amounts of lapis lazuli being ground into powder for pigment. His orders were carried out, at great expense, and he had his magicians bind the paint to the stone itself, so that the paint would never chip nor fade. Thus, the walls to this day are as bright and vibrant as the day they were first painted.

Temples of the Six – Immense structures that dominant the city, the temples to the Annunaki rise up from the skyline with great flat roofs held up by enormous rows of intricately painted columns. While the temple to Annuk is the largest, it is Maskat, goddess of agriculture and health, whose temple is most frequented by offerings. Her lector-priests, with their knowledge of crop blessings that magically fend off diseases and bugs, are the most powerful priests in Annuakat, made rich on offerings. They own much land, both inside and outside the city. The priests of the Temple of Narmaka cultivate opium poppies and the purple lilies whose red tongues produce sassafras, which they sell for great profit. 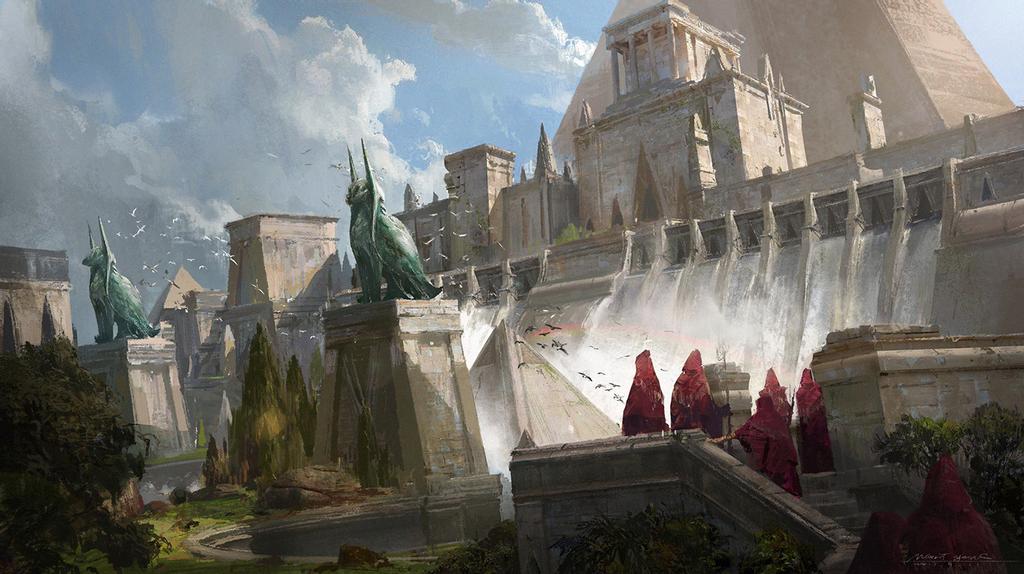 Port - The port of Annuakat is not so deep nor so large as to support immense warships, but it still frequented by tradeships seeking to fill their holds with the city's grain.

Royal Palace, Gardens of Narmaka - The royal palace is the only ziggurat structure in the city, and no building is higher than it. The interior of the ziggurat holds the quarters for the nobility and ruling class of Annuakat, while the steps of the pyramid themselves are taken up by extraordinary gardens, known as the Gardens of Narmaka. Many rare and exotic plants are grown here and it gives the Royal Palace the appearance of a green mountain, rather than a man-made pyramid. Balconies peek out from within the pyramid to look out upon the gardens, offering the nobility a view of the city as well as their gardens.

At the very top of the pyramid and its ten thousand stairs sits the throne room, which is housed under a roof and walled on two sides, but open to the air both before and behind the throne.

Annuakat has a rich history, going back as far as the histories are written. The city has grown over time to become one of, if not the, most populous city in Amol-Kalit, with room to grow. It courts tradeships from the Gulf of Annuak, while beckoning those further up the Baal-Duru to venture down in order to purchase grain, bread, and beer.

The city does not have a martial history, relying primarily on mercenaries for a more permanent garrison, while drafting the farmers into a seasonal fighting force in times of war. Slaves are also pressed into military service in times of crisis. The Marya nobility are renowned, however, as charioteers and they ride their scythed, golden chariots, pulled by golden steeds to great effect in battle.


Gerra of Molthal, believed by the Sand Elves to be a prophesied Djinn come to restore them to glory, conquered Annuakat with deceit, paying the mercenaries of the Order of the Bronze Claw to butcher the Marya nobility and open the gates. After installing himself as ruler of the city, Gerra began appointing Sand Elves to replace dead nobles, thereby giving those loyal to him places of prominence within the ruling elite.

This page has been seen 754 times.