“They strode beneath the flowing ogee arches and minarets of the Alabyad Palace, marveling at the honeycomb-like muqarnas vaulting and blue, white, and gold tiles upon floor and ceiling that produced a mesmerizing effect upon the viewer.'

On the eastern bank of the Baal-Asha lays Ragash, one of the Seven Great Cities of Amol-Kalit. The domes of the palace dominate the skyline in every direction and it borders the large, flat expanse of the Aberresai Savannah. Ragash does not sprawl, but has a highly concentrated urban population - built up rather than built out. 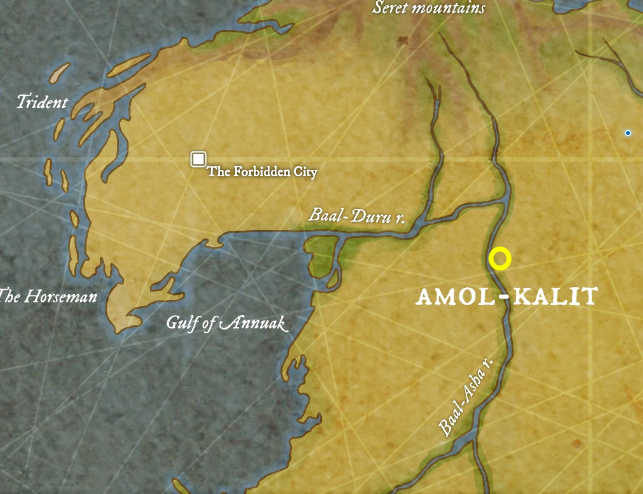 
Unlike some of the other Great Cities of Amol-Kalit, Ragash is not a metropolitan city and the vast majority of its inhabitants are Kaliti humans, who identify themselves as Ragashans rather than Kaliti. Over the years, the conquests of various Ragash Shahs on neighboring Ngonya Beastmen tribes has brought an influx of the Savannah dwellers into the city and those who are not slaves have attempted to adapt to urban life, but life here is very hard for them.

Shah Bardya, the former ruler of Ragash, appointed governors called Atabegs of outlying towns who owed fealty to Ragash. After his demise at the Battle of Ninagal, the new ruler of Ragash - Gerra of Molthal - replaced many of these Atabegs with Abtati Sand Elves.

Bordering the mighty Baal-Asha, Ragash does not lack for fresh water, but drinking it makes most sick. Consequently, most Ragashans drink beer made from barley. The Ragashans, however, do utilize the enormous river as a highway for trade, with barges carrying goods to and from the city constantly. Access to the Savannah and the ivory tusks of rhinos and elephants has made the city quite wealthy as such a difficult good to acquire is always in demand. Ragash is also known for its weavers, who produce beautiful rugs and clothing. Even so, the land here is not as fertile as the Gulf of Annuak and rainfall is sparse. As a result, it is not unheard of for many to die in years of famine from starvation if the grain stores are not properly kept. 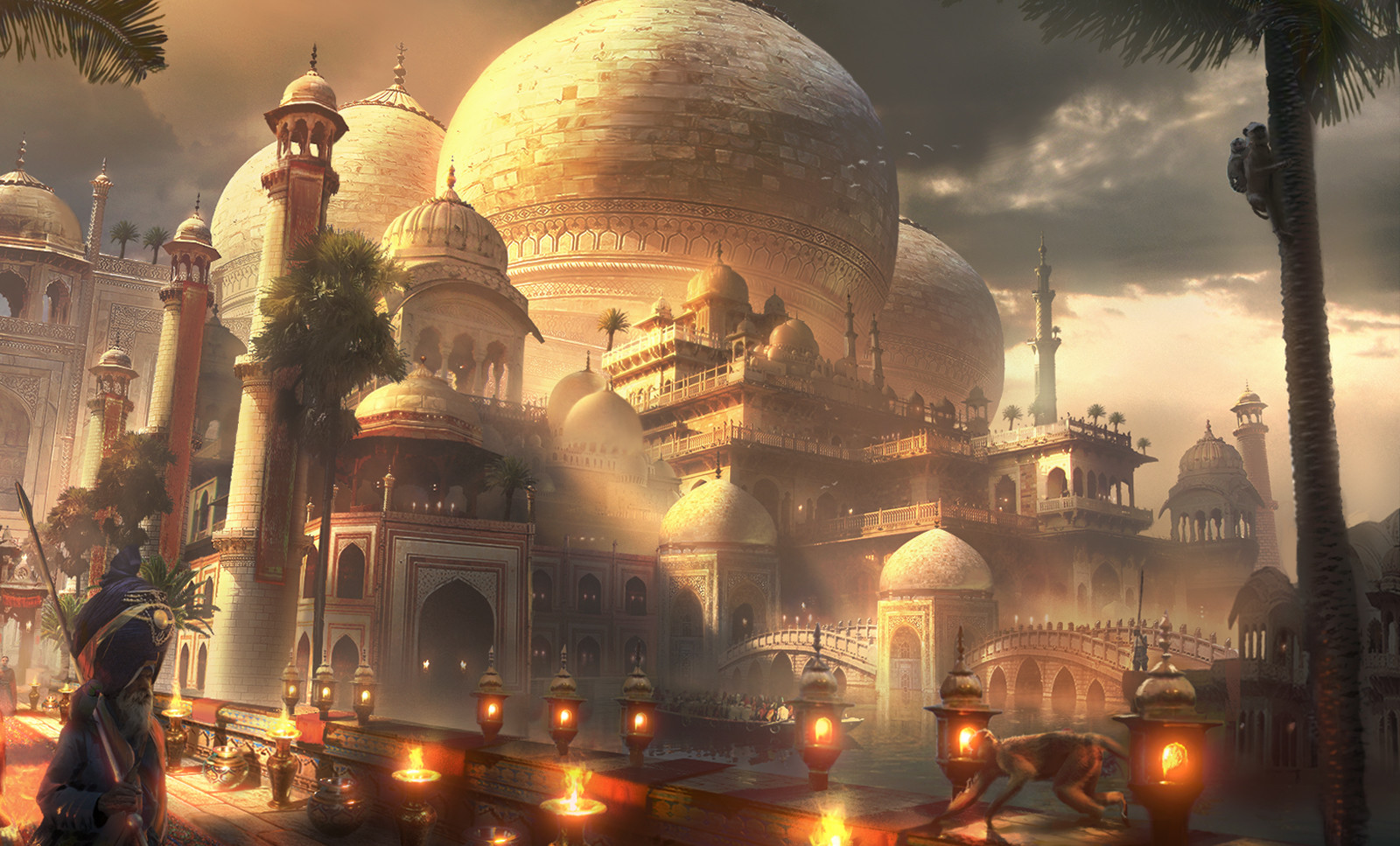 What Ragash is known most for is its architecture, which some say is the most beautiful in Amol-Kalit. Its walls are not so high as Annuakat, nor so imposing as Kherkhana, nor as mystical as the hidden Rhaqoum, but there is a beauty to the domes, minarets, and colorful, vaulted ceilings of Ragash that none of the others can match. Its garrulous tiled floors and walls, honey-comb patterned ceilings, and reaching minaret spires are all feats of human artistry and engineering, which Ragashans are proud to remind others of when given any chance.

Alabyad Palace - The white domes of the palace are enormous, even by Arethil standards, and rise like great balloons to dominate the skyline. They are even more beautiful inside, as the enormous ceilings are covered in a mesmerizing array of tiles.

The Thousand Fountains - While the Ragashans might not be able to drink the water of the Baal-Asha, they do use its waters to create hundreds of fountains spread throughout the palace grounds, which make it a verdant place in an otherwise dusty city.

Room of the Golden Pond - perhaps the most astounding of all the rooms in the palace is the room of the golden pond, which contains a vast pool at the center of a room where every wall is sheeted in gold. The pool reflects the gold of the walls, creating a beautiful shimmering effect upon the ceiling. 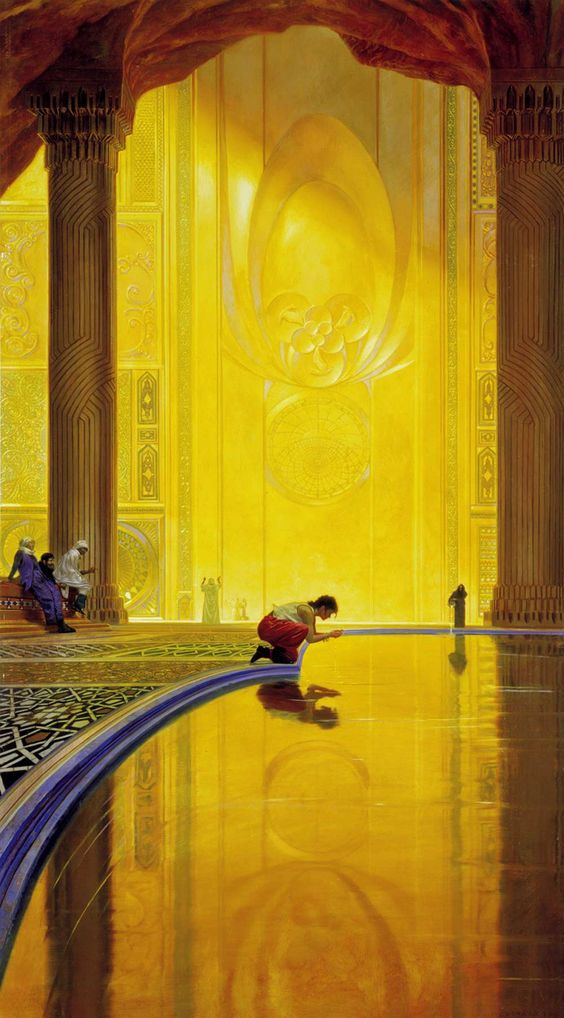 Madrassa of War - The once-grand army of Ragash, known as the Red Sands, were utterly decimated at the Battle of Ninagal. Gerra of Molthal disbanded those who were not professional soldiers, bidding them return home to look to their families and trades. But the battle created many hundreds of orphans, likely destined for the streets. Recognizing the drain that this might place upon the city and towns and the destitution these orphans would be confined to, Gerra confiscated one of the large estates of a dead Atabeg within the city and converted it into a school designed to educate the orphans. In return for food, education, and housing, the orphans are expected to serve as elite soldiers in Gerra's army.

Madrassa of Peace - Under Vizier Telenar's direction, another school was created within the city, with the goal of producing sages educated in the astronomy, history, geography, and the arcane.

Madrassa of Life - The Bimaristan - The college of medicine existed prior to Gerra's arrival, but membership was only permitted to Ragashans. Gerra has done away with this and any who desire to study medicine may come to the Bimaristan of Ragash.

The Grand Bazaar - while the city does not have a permanent population of foreigners, the Grand Bazaar - an open rectangle filled with tents in the city's southern quadrant - has a large concentration of merchants from all over the world, most of whom only stay in Ragash for a few weeks. Here, they can freely trade their goods and many princes come from across Amol-Kalit to the grand bazaar to buy rare items. The blackmarket thrives here.

Ragashans are a proud people, who defy the ancient ruins of the long dead Sand Elf Empire with their modern feats of beauty. They are also warriors and have conquered many others towns up and down the Baal-Asha, as well as to the east, where several nomadic Ngonya tribes owe fealty to Ragash.

Shah Bardya, the last human Shah of Ragash, used to institute hunts among the Atabegs, where they would release slaves and hunt them down in the Savannah. Gerra of Molthal, after conquering the city, ended this practice, which he called barbaric.


Gerra of Molthal, believed by the Sand Elves to be a prophesied Djinn come to restore them to glory, defeated Shah Bardya's army at the Battle of Ninagal in 369 A.C. and took the city of Ragash without any further resistance, sparing the surrendered elements of the army and instituting many new laws and construction works funded by the Shah's own treasury.