Menu
Install the app
You are using an out of date browser. It may not display this or other websites correctly.
You should upgrade or use an alternative browser.
Category View 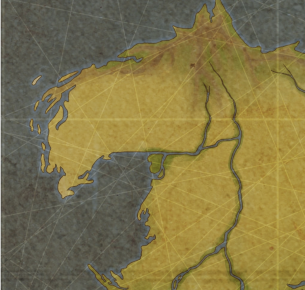 Amol-Kalit is the land of ten thousand kings and a hundred thousand heroes - each one greedier and more starved for glory than the last. There are two sheikhs for every grain of sand, five warlords for every drop of water, a host of marauding bandits for every follicle of hair.

There is much death in Amol-Kalit, where rulers rise and fall with the sun. But there are also fortunes to be won for those who do not shrink from the sight of blood.

Amol-Kalit is dominated by sweeping deserts and treacherous badlands. In the far north, the Seret Mountains crowd along the coastline. It is from these mountains that the two rivers of Amol-Kalit flow: the Baal-Asha and the Baal-Duru. The Baal-Duru is the shorter of the two, leading off to the Gulf of Annuak. The Baal-Asha is considerably longer, traveling the length of Amol-Kalit before splitting in two. The borders of what is considered Amol-Kalit ends at that point, and the cultures that live further down have differing names for those rivers.

These two rivers are of vital importance to life in Amol-Kalit. Their regular and predictable flooding allows for lucrative agriculture in what would otherwise be a desolate wasteland. Most civilization clings close to the fertile floodplains that surround the great rivers. The seven great cities of Amol-Kalit, for instance, all sit on the banks of either the Baal-Duru or the Baal-Asha. Lesser cities and settlements can be found between all of them, but smaller villages huddling around oases deep in the desert aren't unheard of.

Many ruins and tombs are scattered around Amol-Kalit’s wilderness. The vast majority of these structures belong to an ancient civilization of Sand Elves. Most of these impressive structures are well-known and already scoured, of importance only to scholars and criminals. The Forbidden City is chief among them - the best preserved and the most extensively studied.

There are always rumors of more, with treasures yet unclaimed, hidden somewhere in the dunes.

Amol-Kalit is a fractious land. Many governments are ephemeral at best, as they constantly collapse or are disposed of in coups, wars, and revolutions.

The seven large cities of Amol-Kalit tend to hold the highest concentrations of political power. They are ruled independently of one another and tend to extend their influence some distance beyond their city walls - generally to surrounding agricultural and mining settlements, plus a handful of forts. The rulers of these cities adopt any number of titles, though among the most popular are Emir, Sultan, or King. The cities vary wildly in how they govern themselves, and it’s said no two are exactly alike. 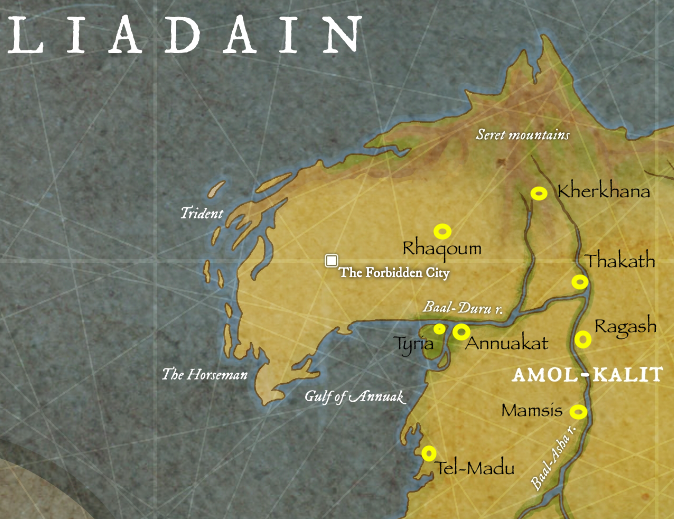 On the outskirts of these cities are various smaller, independent settlements. They hold precious little economic, military, or political power on their own. Mostly they serve as game pieces for the myriad of warlords, bandit ringleaders, and other would-be conquerors who are constantly vying for control of the region. Rulers of these settlements - the peaceful ones, anyway - are typically called Sheikhs. Towns typically try to align themselves with the larger cities for protection. Yet the cities are all too frequently shown to be unreliable suzerains at best. Towns change allegiance far more frequently than the cities.

Nomadic tribes of a variety of species make their home among the dunes and the badlands. Many nomads try to avoid the politics of the cities, but some are known to trade with them.

Humans, predictably, have come to be the dominant population in Amol-Kalit. They reproduce far faster than their neighbours, and are far more zealous in expanding population centers. Humans from Amol-Kalit are typically referred to as Kaliti, though this is mostly a term of convenience. There are many different human cultures and traditions in Amol-Kalit - Kaliti is merely a catchall term. A human from the lands controlled by the city of Ragash may prefer to be identified as Ragashan, for example.

The nomadic tribes that keep to the outskirts of civilization in Amol-Kalit are predominantly comprised of Sand Elves. Aside from the Kaliti itself, they are the most popularly known inhabitants of the region.

Beyond the humans and Elves of Amol-Kalit, there are minor populations of lesser-known races. Some have integrated successfully with the humans and live as equals in cities and towns. Others prefer more remote climes, existing solely as scavengers and nomads. Humanoids with the features of lizards, serpents, scarabs, scorpions, and felines are among the most frequently spoken of, However, there are also other races that reside here like the Anaphite and some populations of gnolls.

Minor populations, such as the Sand Elves, keep to their own theology and pantheons. But compared to the Annunaki Pantheon, their prevalence in the region of Amol-Kalit is remarkably limited.

During the year 370, when several planets and moons aligned, a colossal dragon by the name of Drakomir emerged from beneath the sands not far from the Forbidden city, rupturing the land in his wake. While Drakomir was slain in Elbion, Amol-Kalit now bears a scar as a mark of the dragon's awakening. [1]

Little remains known of Amol-Kalit’s history prior to the human migrations. Sand Elves are theorized to have dominated the region thousands of years ago, a story supported in the folklore of various non-human populations. These tales describe the Sand Elves as either brutal slavers, ruthlessly subjugating the other minor populations... Or benevolent peacekeepers, resolving conflicts diplomatically and spreading prosperity. What remains consistent is that the Sand Elves were then ruled by a series of Pharaohs, and that they worshipped a formless, genderless deity known as Abtatu.

What caused the decline of the civilization can only speculated at. Internal turmoil, plague, or slave revolt all seem likely, given the separate oral traditions encountered. Most scholars surmise it must have been all three. Some legends speak of Sand Elves holding concert with dangerous "outsiders" who inevitably brought ruin. Regardless, by the time humans arrived in Amol-Kalit, the Sand Elves had already been living as nomads for hundreds of years prior to the human migrations - either ignorant of their past, or fearful to speak it. The oral traditions of the Sand Elves themselves never make any mention of their supposedly glorious past. As far as they go say, the Sand Elves have always been nomads, and nomads they shall remain.

When the first humans arrived in Amol-Kalit many centuries ago, they quickly adapted to the harsh environment. Their quick grasp of agriculture enabled them to tame the fertile floodplains and sustain a large population. It was around this time that the Annunaki Pantheon first appeared and began to compete for worshipers among both the human and non-human populations. Whatever proto-religions the migrating humans brought with them were quickly eclipsed and supplanted.

It was not long after the cities were settled and large that the first wars began. While war and conflict was a grim inevitability everywhere else, for the people of Amol-Kalit it was constant and - practically a way of life. More recently, the constant wars have subsided with the emergence of the Empire of Amol-Kalit as the domineering power of the region.

Whether the empire or this period of relative peace will last more than a decade, however, remains to be seen.