The town of Maraan is a rare spot in Amol-Kalit led by relative peace and unity. It is a town where people of most creeds are welcome. It is neutral in the conflicts of the warlords, yet benefits greatly from their protection.
Most of this trading town's population are just transient or seasonal traders rather than permanent settlers. 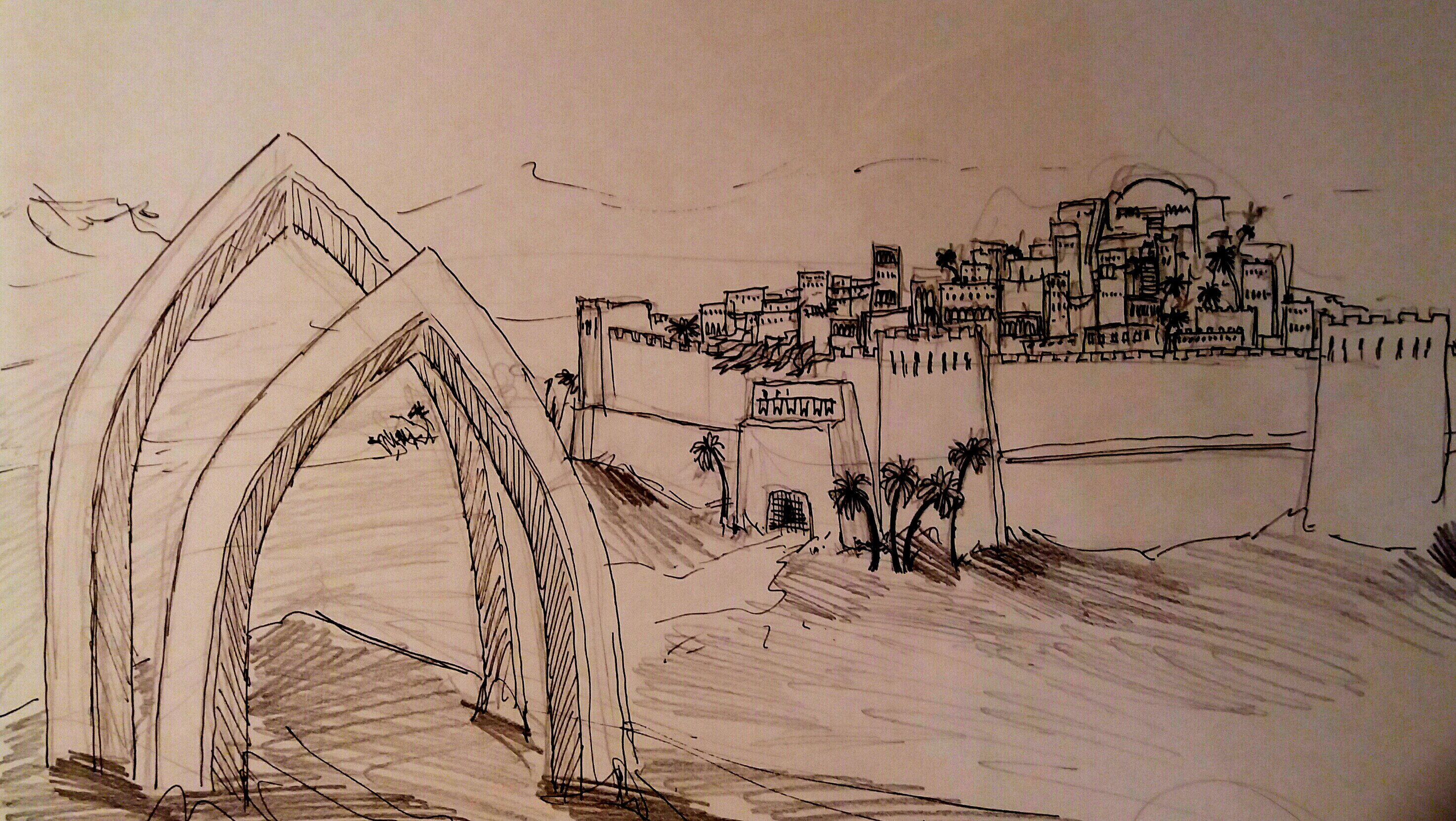 The majority of the populace are transient traders from as far as one could imagine. Few are actually present year-round. Generally, most of the population are some kind of humans or elves, sometimes beastmen or other races. Orcs from distant lands are frowned upon and they are quickly round up if they appear without some kind of credible companion.

The current leader of the trader's council is Jamal, after the previous head died of old age during a siege.

Maraan is first and foremost a trading town. Most of its buildings are houses for traders, barracks for soldiers and stalls for animals. Any residents that live permanently in Maraan own stores, but most others are transient or temporary traders that rent buildings or set up stalls at the markets.

Since Maraan is located on many crossing paths in western Liadain, it accumulates wealth from all around the region. Two of the more popular routes for mages lead to portal stones and other trading towns. It is likely the first town traders or even adventurers looking for respite enter when arriving at Amol-Kalit.
Below is pictured the rough region where Maraan lies in red (some mapmakers argue how close to Baal-Asha Maraan even is ).
Some of the most prominent trade routes are: West-East, North-South being the richest route, Northwest-Southeast and Southwest-Northeast.

The walls of maraan are tall and thick, featureless but have a crease where the thinner upper and thicker lower part separate. The town's main road is wide and expansive while the side alleys grow thinner and thinner the further away from the centre they are. Most of the storefronts are located there.
The houses are multi-storey, some being more like towers than houses, reaching far into the sky. Mashrabiyas face the main streets.
The smaller alleys are convoluted and hardly ever straight, sometimes they turn into tunnels as houses overhand it or they are covered up by latticed vine gardens. They generally lead to other supplementary buildings like Inns, Libraries or barracks and dormitories. Overall the buildings are featureless and colourless, most of the flair comes from cloth and the palm trees and other greenery that is planted on almost every corner.

Twin Arches of Maraan Originally there was no town, just the twin arches that rose from the dune in the south. Maraan, or rather the town of the arches of Maraan was built much later north from the arched dune.
The arches are the first thing one might see when passing these lands. They are also a popular spot to camp at before entering the town or just passing by.
[1] 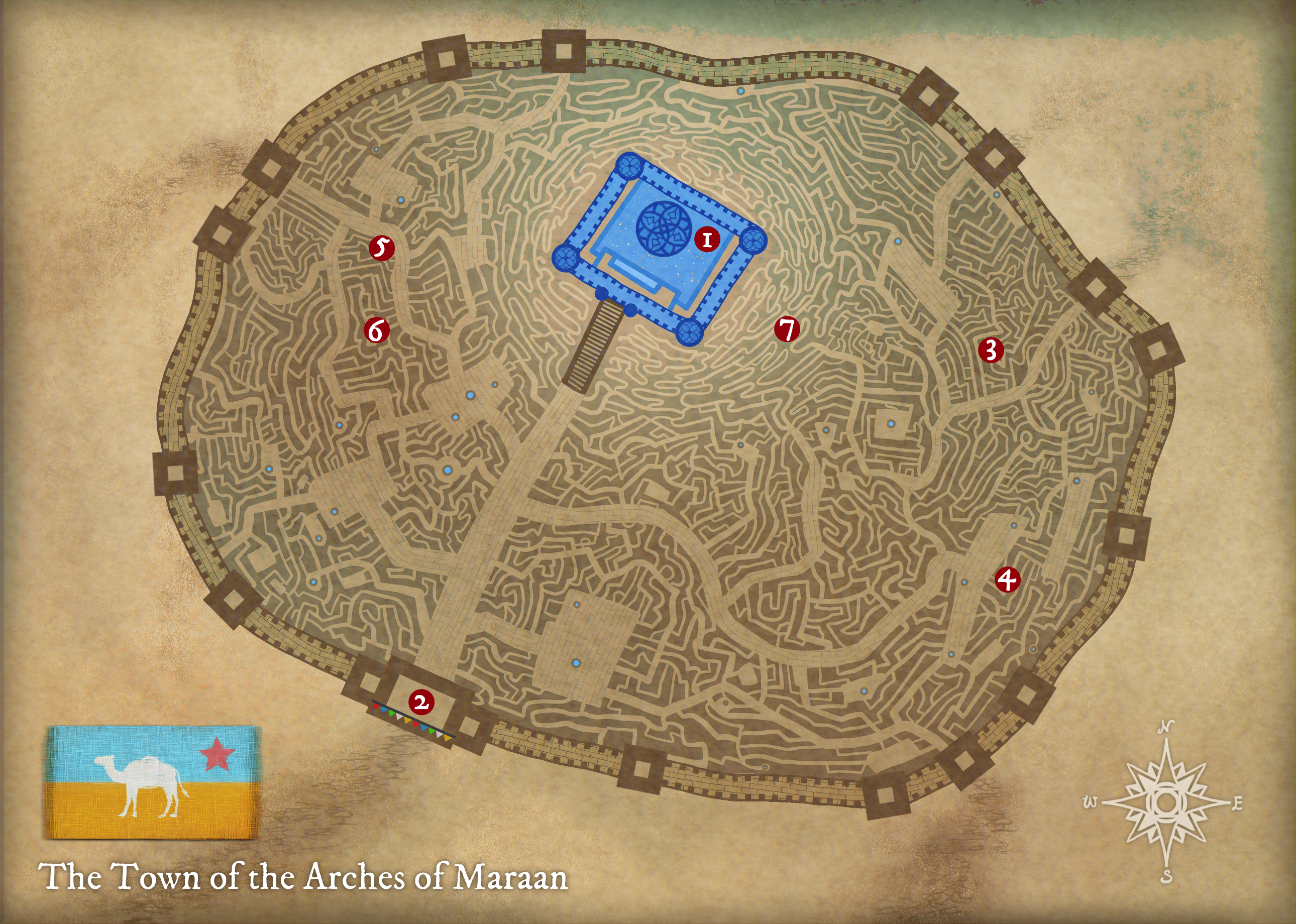 The Star-speckled Teal Palace is a grand building atop a mound. As the name suggests, it is covered in speckled blue tiles, many of which form elaborate shapes in conjunction with golden ornaments that mimic stars or flowers. At the palace, many foreign lords hold feasts or perhaps meetings to discuss political matters in a neutral place.
The palace was originally built atop the footprint of a caravanserai.

The bannered gate is a massive gate, which is constructed as a featureless monument. Whenever warbands or parties pass through the gate, they have to surrender their banner or flag, which is then hung atop the gate for the duration of their stay. This, in some aspects, signifies that whoever enters is now part of Maraan and all within its walls are equals.
In other aspects, it signifies to outsiders just how many soldiers are currently within its protective walls, as a deterrent to attacks.[2]

The testing library collects literature from all around Arethil, and many books within its keep have travelled the world before ending in its shelves. The library is ironically located on the east side of the city.

The coffee shop Is newly opened, the latest attraction in Maraan. It offers food and each serving of coffee comes with a few complimentary barazeks. [3]

The tea shop is owned by a Jaleyaanan couple and their family. Jaleyaana is a city of the north, famed for its tea, thus the quality this shop offers is among the highest in the entire realm.
The tea shop, due to the location of the steep hill with winding roads, offers an extraordinary view upon Maraan. It has an indoor area and an outdoor veranda with low tables and pillows, where a bougainvillea that creeps above pillars, offers a nice shade.

Maraan is led by a trader's council, which usually consist of a ring of four, seven or twelve people. One of them, despite their age, is considered the town elder. In the current day and age, the elder is a young man by the name of Jamal.
Most other seasonal residents in maraan are owners of the buildings, inns, stalls, enterprises and other buildings. They generally dabble in business like landowning and renting their plots to prospecting traders.
The majority of the population thus ends up as the seasonal traders that come and go. They are protected under the law and while present within their walls, are treated as citizens.

Maraan's leadership keeps track of worldly events, having connections with most other trade hubs. when there are significant spikes in trouble, the city responds to them. Occasionally even vetting travellers to protect the city and traders from dangers. [4]

First, there was no town, just the twin archest of Maraan. They would stand proud among the otherwise monotone desert, giving hope to travellers passing through the desert that their path is true.
It was a popular camping spot and still is to this day. This is probably what later gave rise to a more permanent settlement downhill that slowly ended up growing into a proper town.
The first notable structure was a caravanserai, which now lies as the foundation for the star-speckled teal palace.

Maraan was recently besieged by sand elves. However, remained independent.

Maraan is known to most traders of Liadain.

The Sun Falls on Heavy Shoulders, a band of warriors and traders stop at Maraan before it is laid to siege.
The Conquest of Amol-Kalit, a brief mention of the aftermath of the siege on Maraan.
Vintage Dwarven Wine, questers for a legendary bottle of wine stay in Maraan.
Gossip and coffee, a new coffee shop opens up in Maraan.
Tea in Maraan, wayfarers stop at a Jaleyaanan tea shop.
Between Vultures and the Universe, Travelers from Maraan to Elbion.
Chasing Dreams, Ashuanar speaks of his sister's possible sighting in Maraan.
The first City, Sand elf business in the city.
A Kingdom Reborn An alliance between the Kingdom of Cintria and the Dominion is formed.
0 > City layout and Flag by Nidraak.