A wealthy trading port and merchant city located within the Elbion valley along the Cairou river, this is the home of the College of Elbion: a most prestigious place of magical learning and intellectuals and home of the the Foard of Maesters. Elbion is ruled by the Merchant Council – a group of eleven wealthiest traders. They make all major decisions concerning the city, its people, and the economy. The only thing they have no jurisdiction over is the College of Elbion, which presided over the city of Elbion long before the Council was formed.

The Merchant Council has a short leash on the city itself. They control who is allowed to live within the city; who may gain permits to establish a place of business; what sort of businesses are permitted within the city proper; price levies, sales taxes, etc. To be a citizen of the city of Elbion is, essentially, to be part of the Merchant's Council. While it may be difficult to get in and while the restrictions may seem strict, the Council protects its own – especially those who bring in good money.

Though Elbion is touted as being a city open for all, the species-ism is a bit on the nose. One might notice that the majority of the citizens of Elbion are Humans – and there's a reason for that.

Elbion is a city resting at the base of a mountain, sprawling across the lush banks of the Cairou river and reaching along the valley meadows to the east and west. A great wall surrounds the main bulk of the city while Elbion itself is broken up into walled districts. The closer to the College you get, the tighter the security.

The city is broken into three major districts:

Port District – Capable of receiving the smallest of trader boats to ships of sea-faring size. There are two major intake areas: East port, for trade, and West port for travelers, with dozens of smaller intake areas in between. The Port district is where you'll find hospitality like inns and taverns for travelers, and the Trade bazaar where you can purchase trade goods from near and far. Traders can set up a temporary stand for a fee paid to the Merchant council. The crowds ebb and flow with the seasons, but by and large the Port district sees the largest amount of flux in population and hosts the greatest variety of peoples and races.

Merchant District – the largest area of Elbion, here you can find permanent shops and fixtures hosting merchants of a wide variety of crafts and skills. From apothecaries to blacksmiths, stables to book shops, bakeries to butchers, many of the shoppes found here are known across the lands for their quality of product and prestige of offerings. To purchase a shoppe one must first apply to become a member of the Merchant council. The process for application requires a fee, a written letter of intent, an inventory of goods, and typically an interview. The Council does its best to weed out merchants of poor repute or quality, and manages the types and locations of shoppes to keep from having too much crossover or similar offerings.

Residential District – Per its name, this district is where the permanent residents of Elbion make their homes. Each resident is given an Elbion amulet to wear as identification. To get into the Residential district one must either have an amulet, be in the company of someone with an amulet, or have a written patent of invite or intent with the official Elbion seal. Passage into the Residential district is strictly controlled through three guarded portcullis gates.

College District – Situated at the northernmost corner of Elbion, the great College of Elbion is found here. Much like the Residential district, access to the College district is strictly controlled. There is only one major gateway into this district and it is under constant guard. 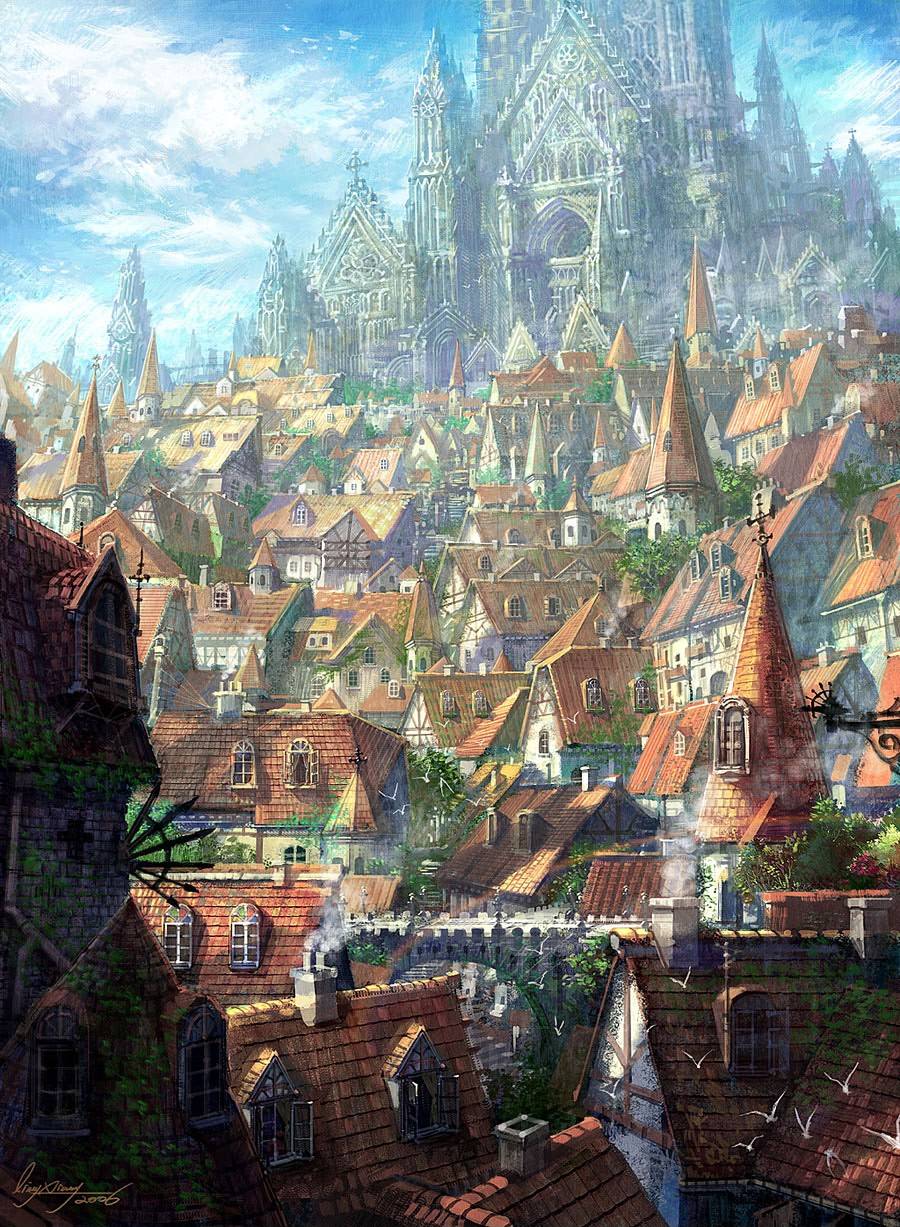 College of Elbion – Predating the city of Elbion by a hundred years at least, the College stands as the oldest part of the city and also as the grandest. The great College hall sits overlooking the city below with vaulting towers of ivory and polished marble. The venture of a wealthy young Mage Lord Ganfritz Elbion, like many things it began as a small holdfast that once stood as a sanctuary to outlawed Magic-users.

While the College of Elbion permits those of most any scholarly pursuit, the Foard of Maesters focuses specifically on those predisposed to the use of the esoteric and arcane. Potentiates must pass through five preliminary trials in order to gain a place within the Foard. Under Lord Elbion's care there had never been such tests – any person of any creed, race, and yes, any gender, was permitted a home at the College of Elbion if they showed any propensity for magic. Anymore the Foard has become exceedingly selective of who they will take in. It takes ten years of study and practice to gain the title of Maester of the First Order and another ten years at least for every level beyond, the Fifth Order being the highest one can achieve within the Foard.

Students of the College live within the College grounds and only students and faculty of the College are permitted entry. One must be aged of sixteen summers to apply for the College. Applicants are required to provide a written resume of their knowledge, background, skills, prior education, and goals for attending the college. They then undergo an interview. The entire process takes about a year – longer if the applicant lives further away, shorter if they live in Elbion, shorter still if they know the right people or make a healthy donation to the college. A good majority of applicants are accepted into the College – those that are not are typically denied on grounds of overenrollment, though the true reason usually has something more to do with their race, gender, family history, or something entirely political.

The Gilded Feather – A bookshop of high notoriety among magic users. The shop is owned by Maester Ignatius Osric of the Fifth Order. Known by most as "Maester Osric" and "Granpa Iggy" by close friends, he maintains a collection of prized books on the art of various magics. One can find a book on just about any topic of magic under the sun, though not all volumes may be detailed and complete. He is best known as the keeper of runic lore and holds one of the largest collections of runic tomes known – fitting considering Osric specialized in rune magic.

The shoppe is located in the east of the Merchant district, easily identified by its gleaming golden sign baring the sigil of a great gilded gryphon.

Thanks to its bustling trade and strong presence in the north of Liadain, Elbion mints its own coin. Enterprising merchants that they are, their currency is quite practical to grasp, calculate, and divide – everything to facilitate a smooth transaction. They have three basic denominations:
[1]
Prices of items in Elbion vary a great deal. The rich might spend a hundred docatto on an outfit, yet a year's board and tutorlage at the college is only a few docatto.
A large quantity of meat or metal tools might cost tolare, but bread and eggs only a few zolde.

Elbion is a city born from a dream. During a time when magic was outlawed by many large cities and seen as dangerous by the popular majority, there were few places the unfortunate mage, wizard, or sorcerer could go to seek refuge from criminalization and study or practice their gift in peace. A wealthy man who had been well-traveled and educated saw fit to build a sanctuary for these outcasts, his name was Ganfritz Elbion.

Lord Elbion was a renowned wizard of great power, venerable and kind to a fault. He took in strays to teach them to control their powers. What had once been his holdfast on a peaceful mountain side became the magnificent halls of the College of Elbion as seen today.

It grew slowly at first, and upon gaining notoriety experienced a surge in residents. As things are want to do over their natural course, the campsites surrounding the manor soon turned into a permanent settlement and began to attract people from near and far. Whole magic-using families soon moved in to learn from the great Maesters of the College, drawing in merchants of various skills and crafts. Over time this town developed into a city, and eventually evolved into one of the largest inland merchant trading ports in northern Liadain.

In the passing of Lord Elbion the governance of the city was given to his five children who eventually formed the Merchants Council. The leadership of the College passed to Lord Elbion's greatest proteges who formed the Foard of Maesters.

"If you can't find what you're looking for here, head to Elbion. They got everything under the sun, and then-some." — Merchant of southern Liadain