Among Seret's protective embrace lies Sey'Kube, the gem of the north, the highland paradise.
Once it belonged to Amir Husayn, but now the city lies under the protection of the Sayyiduna's Shtakmat state.

Its flag is a black Damaqu or Hamtu horse and a golden constellation on a field of green and white.
Occasionally Sey'Kube is also archaically referred to as Say-Kube and Say-Kuba. 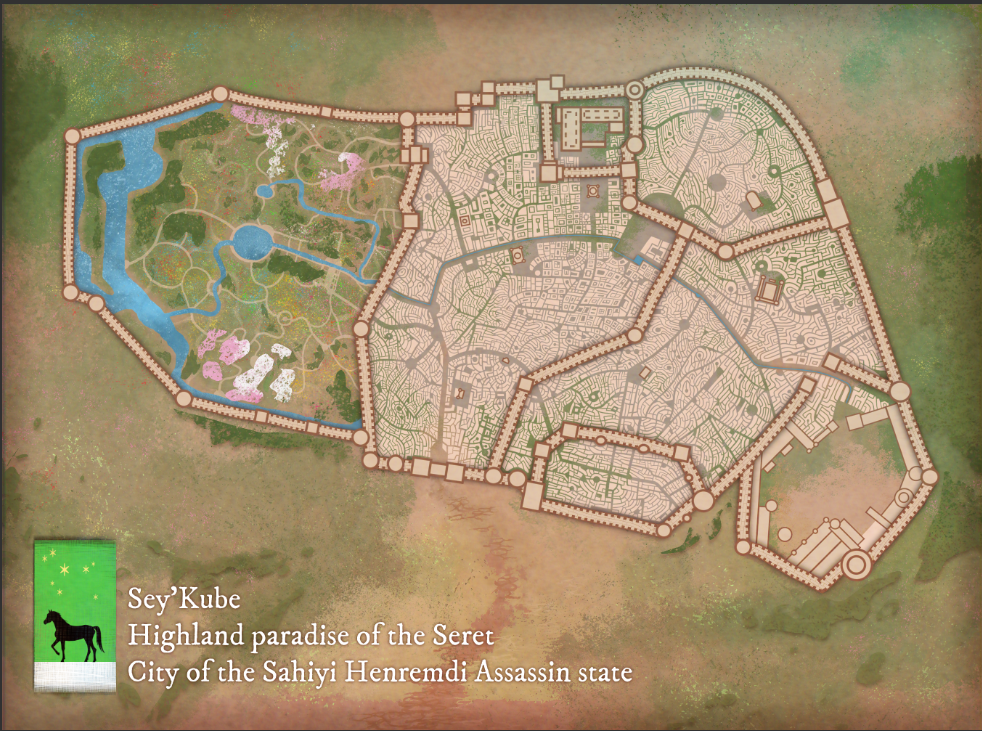 A paradise Sey'Kube is in many regards. For most, it is heaven that protects the prosecuted religious group by the name of Sahiyi Henremdism from harm. Thus most of its population are of this faith. While a large portion of the populace is native, plenty more are religious or other refugees from lands both near and distant. Despite their differing origins and creeds, they all consider Sey'Kube a home worth protecting.

Sey'Kube is neither richly decorated, nor is it highly specialised. It is hard to define just what kind of city it is.

Even though it has a professional army, it doesn't seem highly militarized to a point where the very peaceful soul of the city has died. Neither is the city driven by trade so much to be blinded by profit and vile greed.
Taxation is low, with most of the funds returning to aid the social needs of the poor, sick and elderly. Many would describe living in Sey'Kube as simple and easy.
The city derives a majority its funds from Shtakmat's military operations.
Nearly all of the city's populace are artisans and craftsmen, producing goods from raw materials of the mountains. Most notable are their glazed earthware and dichroic glassware, though a high interest is also put in its ancient tradition of street forged and etched blades. 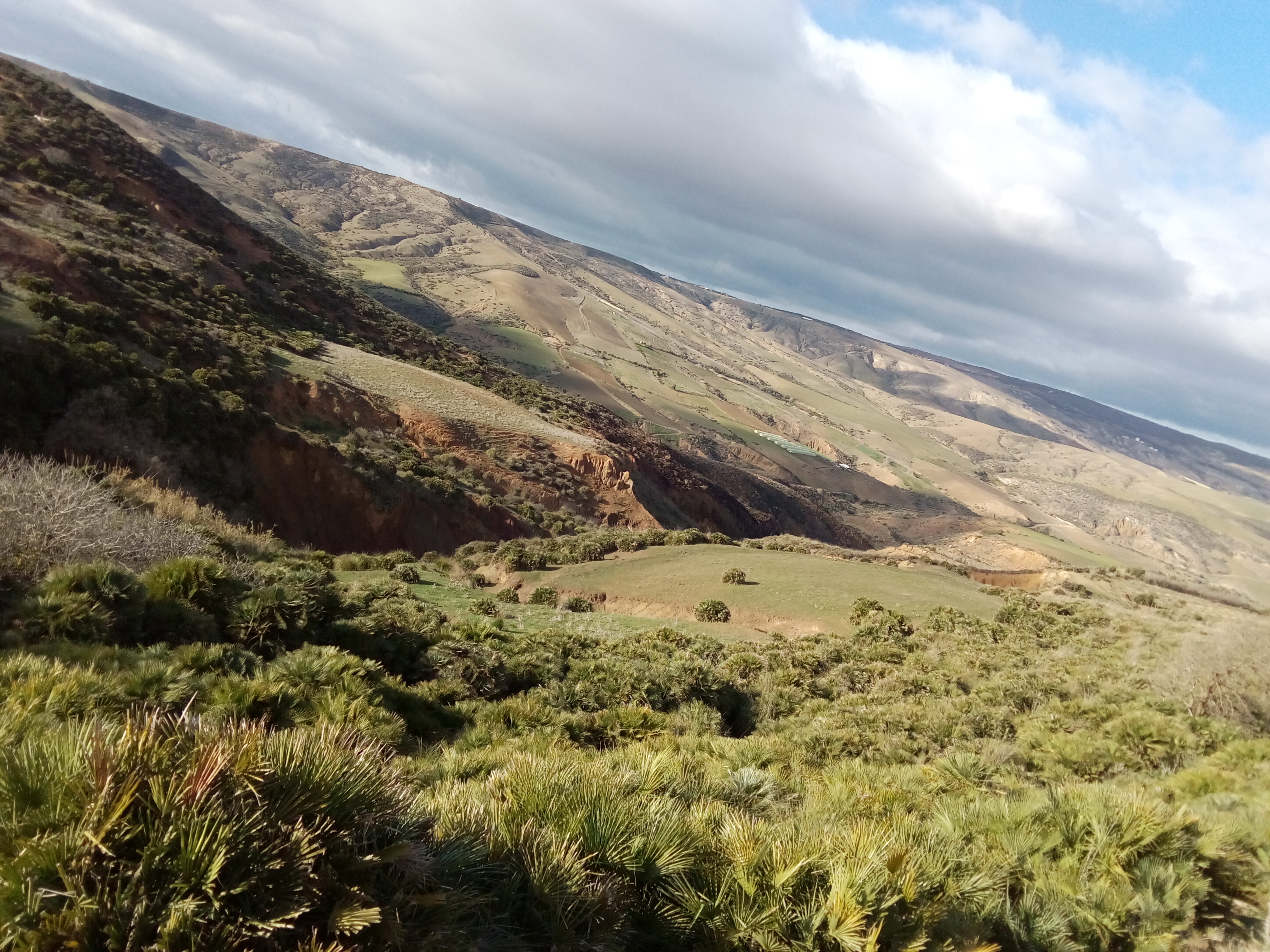 [2]
Sey'Kube lies on elevated ground amid a valley in the Seret mountains. From the north, one can see the endless gulf of Liad, while to the south, the lowlands span into the infinite distance.
Smoky clouds rise from the white mantle of an outstandingly tall, rounded mountain in Sey'Kube's vista named Belnegand. It is supposedly the homeland of demons. [3]

Thicket, olives and cypresses coat the stone outcroppings and hillsides. Vegetation is denser around the Sehrud river, which by the time it snakes around Sey'Kube is wide enough to facilitate travel and trade.

The mornings are commonly misty and fresh, with fog that glows golden in the gentle dawn light of soft hues of yellow and pink.
It is often sunny, yet thick fluffy clouds, opaque enough to shade the earth, drift across the landscape in the noon.

While there are many villages in the vicinity, only those with a Sahiyi majority connect to Sey'Kube and the Shtakmat state on their own accord. (Even if so in secret)
Most of the nearby villages grow saffron or plant orchard gardens, those growing local pomegranates or dates, while others focus on herding animals like cattle and goats on less fruitful land.

The Damaqu strain of Sereti horses is rumoured to originate from these plains. Perhaps it may just be true, for the best horses are bred and raised within local mountainside and valley pastures. 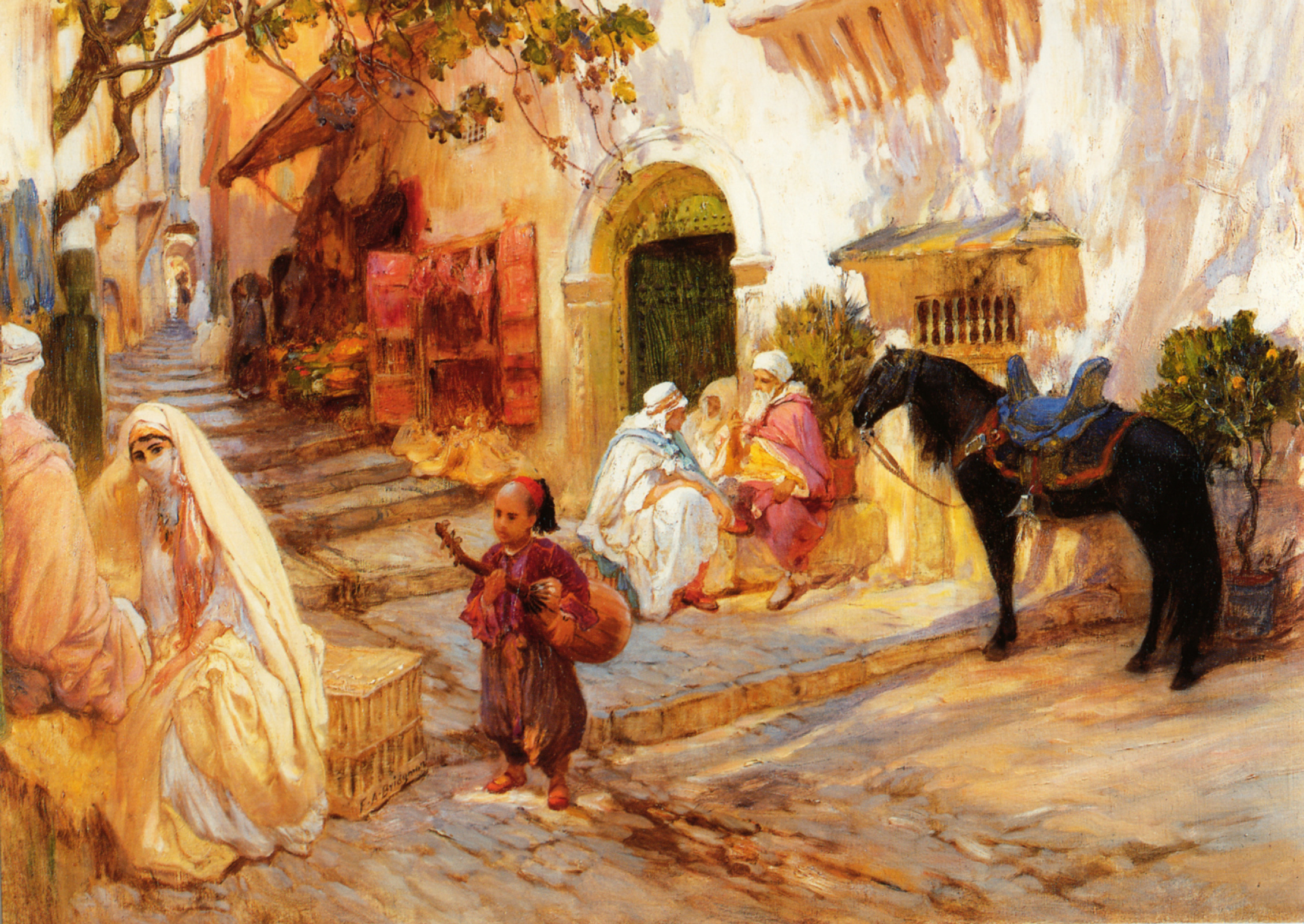 Visiting Sey'Kube, one could only describe it as sublime. It doesn't have any grand domes, nor is it coated in gold on every street block. Yet it's beauty does not escape one's eye.
Ancient bougainvilleas and grapevines grow between white buildings; and on every well site, there are shades from tall figs and pomegranates for people to enjoy. (also locally called bleeding apples of paradise)

Many of the buildings sport arcaded elements or atriums, and towards the street are countless of ornately crafted mashrabiyas. The buildings are coated either in white or soft-beige plaster, not uncommonly also decorated. Commonly around the windows and above doorways are etchings of geometric ornaments like the seed of life and similar symbols, or naive floral murals in red and green.

The walled gardens of Sey'Kube


Among groves of oleander pink and red, where the peacocks display their colours in bright emerald and gold, where gazelles freely move among guests without fear. There where the sweet scent of blossoming trees intoxicated all that lay within.

There, a solemn thought grows among the peaceful bushes.

I would have loved to have children of my own,
to have raised them back in Sahkrizil,
to have two, three, no, five from a loving wife,
in a home that is all my own.

Azrana lifted little Aisha high into the air. She lept into the sky like a dove, and her orange dress fluttered among the scented breeze of the grove. For a moment she even looked like a bird of paradise, dancing in the sky, before landing safely in the Kherkhanite's gentle blue hands.
Again and again, the little girl of amber skin embraced the air. Azrana almost feared that she would have flown away. Far from the fringe of Seret, travelling across the gulf of Liad to lands unknown. Perhaps even into heaven where honeyed dreams live.
Yet she returned with each of his throws.
And her cheerful laughter that filled the grove when she left his arms.
Azrana was at peace.

»Higher, Azrana, higher! I want to touch the clouds!«
»But if you get stuck on a cloud, how will I get you down?« The ogre chuckled, met with even louder laughter from the girl.
If only this moment could last forever.


Fatigued, Azrana fell to the ground, huddled among expired blossoms and decaying leaves. Aisha silently perched atop his chest, her eyes travelling from tree to tree before ending glued at the tallest tower on Sey'Kube.
Click to expand...

The walled gardens of Sey'Kube are seemingly eternal. Lots of its land is dedicated towards trees and brushes, many of which are pomegranates, oleander, climbing roses and others. Many plants that grow there are local, picked either for their sublime beauty or intense fragrance.
When the gardens bloom, the dominant colours are white and pink, with subtle hues of violet and orange.
The styling of the garden feels overly natural, with plants being left to grow naturally with little to no hand from gardeners. The footprint of the garden is almost as big as the rest of the city.

There is a watering hole in the middle of the gardens, which derives its spring water from within the walls.

100 golden peacocks make their home in the garden, gifted by the king Nagendra of Vedargas. Their bodies are black and brown, with blue and gold highlights and plumage. Ten pairs of emerald peacocks also roam the gardens freely with its many other denizens, like tame gazelles, antelopes and cheetahs.

On the opposite end of the gardens lies the walled keep. Its yard is now a place where the military commander Arsalaan trains his troops in cavalry maneuvers and swordsmanship.
Many of the building complexes have thus been converted to suit the needs of their soldiers.
The keep was once the prime palace of Amir Husayn, but now most of its rooms have been dedicated by the Sayyiduna to be turned into scripture libraries or towards the teachings of Sahiyi doctrine, perhaps to appease the pacifist Sahiyi Mystics.
Most of the former internal gardens have remained, however, their opulence, since the change of leadership has been removed.

Sey'Kube's relation according to some of the more prominent neighbors. (there are plenty more Amirs unmentioned and still unseen)
Due to Sey'Kube fostering a growing religious minority, relations with neighbors are poor. Even with those that are Henremdi, either heneri or anti-heneri (and their other offshoots). (more about them on the page belonging to
Hushur) 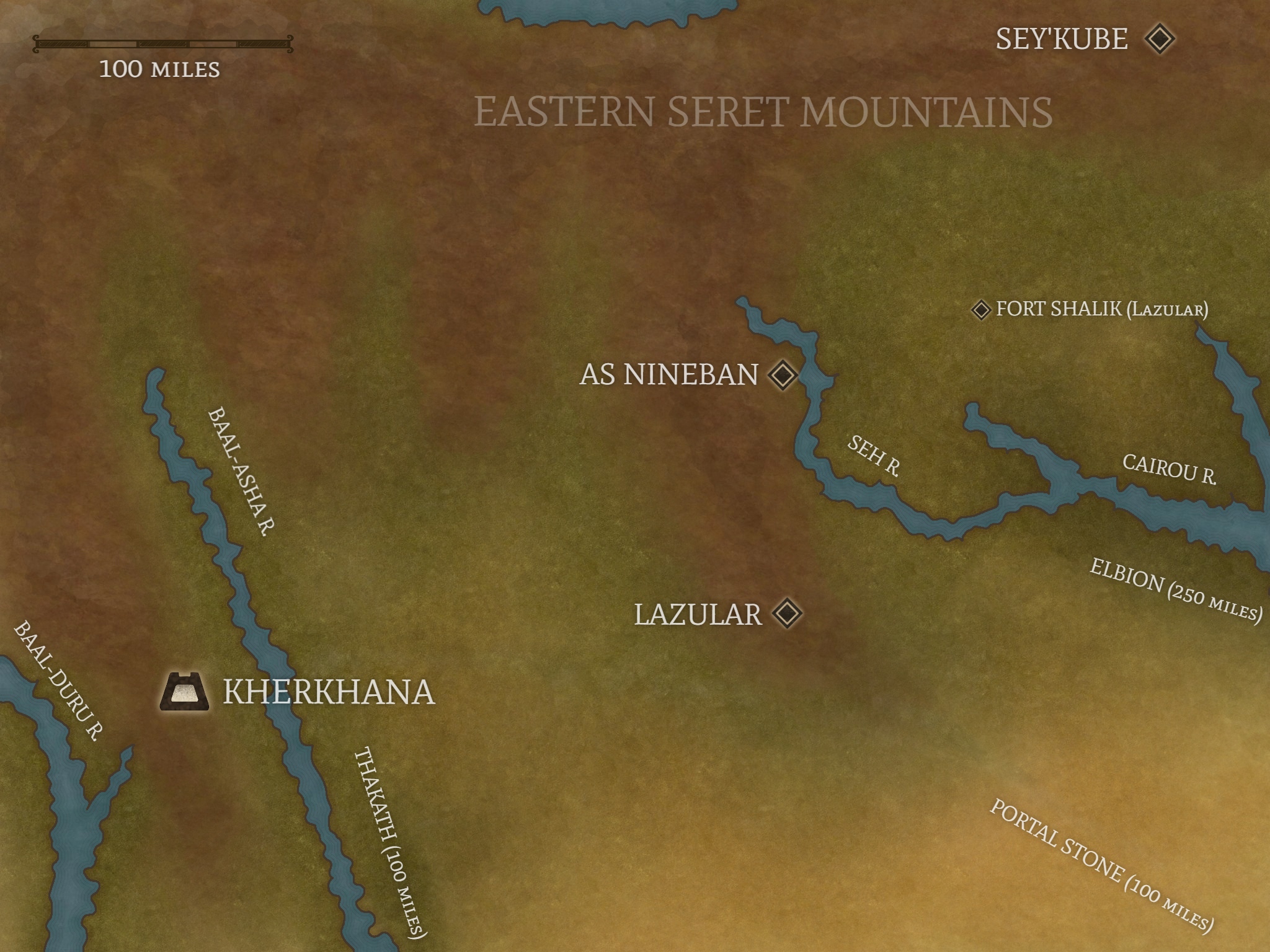 The first mention of Sey'Kube under an archaic name. The Sun Falls on Heavy Shoulders
The Shtakmat State escort healers to Sey'Kube to heal lepers. Path of Miracles and God Help the Outcasts or Nobody Will.
The former also deals with the process itself within the city and its lack of alcohol.
Mood rp. Events almost entirely undertaking in the Walled Gardens. Solemn Grove of Honeyed Dreams
Military parade and festival on an eclipse. When the Day Goes Dark
A look in the matters of Sey'Kube. Unlikely Meetings
A small quip on Farid Ibn Baha's plan to eradicate Sahiyi worshippers and take over Sey'Kube. Skirmish in the Sands

A thread relating to the mountain Belnegand, which lies in Sey'Kube's vista.

Another event entirely situated within Sey'Kube's garden. Do the stars look back when we gaze at them?

Literature escapades In Sey'Kube's Library; Theology, literature, life, such topics are seldom discussed, yet ever-present in the daily matters of people.

This page has been seen 705 times.