Completed When the day goes dark

There weren't many days in the year in which Sey'Kube was as beautiful as today. Decorated to the brim in flowers and blossoms, banners and flags, with blue and golden peacocks freely walking among visitors.
It was quite a sight to behold in the otherwise mundane wasteland of Amol-Kalit.
The city had arranged new places for markets and stalls, where locals sold goods from all around the region, including Sereti steel weapons, black camels from Al-Mirabet and the famed hibiscus tea from Narra.

The Sayyiduna, the mysterious and seldom-seen leader of Sey'Kube, sent invitations to far off and nearby lands.
Inviting leaders by name in letters and commoners by word of news. Even the nearest portal stone had been cleared of thieves and brigands that would have otherwise preyed on caravans that passed through. It was rare that his domain would be so open to outsiders.


-*-
​
It was early morning and Lessat already gleamed with her pale blue complexion on the daylit sky, though it was still a few hours before she would kiss the sun and cast the world in darkness.

The masses had already gathered in the main street by the gardens, watching the parade of Sey'Kube's army.
The grand commander Arsalaan led the procession at the helm, behind him rode rows of cataphracti, silverine and armoured head to toe. After them came the camel riders, white as snow. Many carried banners colourful, carrying motifs of weapons, animals and plant life.
Last edited: Nov 25, 2019
Reactions: Ako Kipali 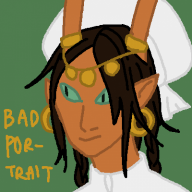 Word of mouth about the planned festivities had come to Alamina's ears. And where there are many people there is much money to swindle earn. And Alamina was close enough to come on time too!

Alamina had found a nice spot to set up her stall. Between a stall selling various trinkets and another selling pottery. But her stall was selling something different, "Come and get a fortune! The price is small! Specials fortunes just for the sky's darkening!" Alamina was using the most charming smile while trying to advertise the stall. Her pack mule Bido layed behind her tied to a post. Alamina had aleady gotten a few customers, but wanted more before the parade of the Sey'Kube army would reach her spot on the street. The crowds would move to the side and pay full attention to the procession. And while that is a favorable time for a pickpocket that thinks they won't be the one to get their hands cut off, Alamina knew better than that.

"You there!" Alamina would sometimes call out to specific people, "I can see it in your eyes, your worries. Come have a fortune told and ease your spirit!" But this one was uninterested. So she continued to try to sell fortunes to other people.

As the military marched past the populace, they slowly began to mingle among the many stands that sold their wares.

Among the many visitors were a little girl and her company. Little Aisha was quickly enthralled by the odd appearance of the Komodo. She grabbed Zarrin by the hand and led her towards the stand.
Reactions: Alamina

"Fortunes for sale!" Alamina was energetic at the stand, and even more so when she noticed a cute little girl and her chaperone come towards it, "Would the two most lovely misses care to buy a hint of the futures fortune? Doing so on a day like this can only bring forth great blessings, it is not an opportunity to be missed!"

The stand was small but finely decorated. With the assortment of various cards, dice and hard to describe trinkets, the first thought to someone would be 'Oh, this is a flimsy trinket shop', if it wasn't for it's owners loud proclaiming about selling fortunes.
Reactions: White Swallow

Aisha with gleaming eyes gazed at Zarrin, who was quick to relent.
In fact, she might have been quite excited as the idea warm up to her.

»How much for a fortune, dear miss?« Zarrin spoke in a soft voice.
Reactions: Alamina

"Depends. On how deep you want it to go. Or with what method. But the standard is that the price of one fortune is the same as a fist of grain," Alamina, despite many years of travel in many diferent lands, could never quite bother with memorozing conversion rates or the names of local moneu. So this was a good base price. Bur also made her vulnebar to being scamed.

"A fortune told with dice is half that. The standard os for these types of cards," she gestured at a standard set of cards, "For these here, specifically designed for fortune telling. Twice that. And for a telling with a crystal ball it us five times the standard."
Reactions: White Swallow

Zarrin curiously observed the fortune merchant before picking out two riya coins, one for herself and another for Aisha. »I would like to have my fortune read and that of Aisha as well.«
Reactions: Alamina

Alamina took the two coins, and with the other hand took a set of playing cards, vegung to mix them with swift movements.

"Care to tell Mina your names, o sweet roses of Amol-kalit?" after pocketing the coins she moved on to shuffel the cards with both of her hands, "For this reading you will pick out five cards. The central will connect with Lessat and tell us about the core of your being. The four after it, behind it. Will tell us aspects of your future."

Alamina shuffeled all of the cards into a neat deck and holding it out Zarrin, "Here you split the deck. The first one is your centre."
Reactions: White Swallow

»My name is Zarrin.« »And I am Aisha!«
See, Zarrin was a borin woman, instead of splitting the deck, she picked the first card.
6 diamonds. The aspects followed as Ace of diamonds, eight of diamonds, ten of diamonds and four of spades

Alamina's smile cracked for a bit when Zarrin took the first card instead of splitting the deck. She helped lay out the cards
"The six of diamonds. It is a card of charity and support" She looked at the woman trying to judge her expression, "Your essence and core are that of a supporter, be it monetary or emotional support. The majority of your four aspects being in the diamonds suit indicates you have a strong connection to the material world. The ace of diamonds indicating a value in new things coming into your life. The eight, is self improvement, a constant strive for betterment. The ten indicating a strong connection with traditional values and sticking to them. The sole four of spades shows that to balance those out you need time to recover and rest."

Each of her sentences was exagerated by quick hand movements, "If Zarrin keeps these aspects of yourself in mind when you plan your actions your future will bode well. Is Zarrin satisfied with this fortune, or does she perhaps have any questions?" she asked last, picking up the cards to shuffle them for Aisha.
Reactions: White Swallow

Zarrin smiled, appearing rather thrilled over the card reading. She felt as if her character was spot on, regardless of how vaguely the answer was formed and how much it could apply to neigh anyone. IT simply did not occur to her. She then reached to her pockets to fetch the rai.

Aisha bounced ecstatically. »Now me!«
She split the deck at the 8 of hearts. The aspects followed as the ace of clubs, two of spades, five of clubs and king of diamonds-
Reactions: Alamina

Alamina smiled at the little Aisha, kids are so adorable, "Ofcourse! The young miss is now. Just split these cards."

Alamina looked at the cards Aisha had picked, playing upa very deep thought show for the little girl, "I see the eight of hearts. Your core is changing, a sign of growing up. You're leaving something behind, and while it is not known yet what. You won't be able to change back to it. But that doesn't necessariarly mean a bad thing child," she took out a little clear gem in presentation, breathing a bit of her fire onto it, it changing a pure sparkling black stone, she gave it to the little girl, "Aisha is a fiery maiden. Your aspect of the ace of club supports the change being a good one. It will bring forth new ideas and changes. But that won't mean it will come easy Dear fluttering bird. The two of spades, and the five of clubs, they show us that there are things you are refusing, a failure to communicate properlly, sparking fights and everything just not running as well as it could be. But the king of diamonds shows us that with hard work, you can easily enjoy the fruits that will be brought fourth by ballancing your other aspects."

The little lass was all in awe. Was that her fortune? Well it did sound rather thrilling! Even though she was still too young to propperly make it out.
Azrana, a larg blue orc walked past the crowd, they seemed to move away from him respectfully and without a fuss. He put a hand on the little girl looking down.
»And my little darling, what are you doing here?« He spoke with a voice most soft.

She lifted the little crystal into the air, close to the sun where she could closely observe it better.
Lessat was so much closer to the sun now. Within an hour it will swallow it whole.
»I got my fortune read, and the nice lady gave me this pretty rock.«

Alamina greatefully took the riya put them in her pouch, "Most generous of kind sir," she gave him her usual smile.

"And would the kind sir also be interested in a fortune reading?" Alamina gestured at the cards on her table, "The two ladies most enjoyed it. I am sure it will bring you joy too."
Reactions: White Swallow

The ogre chuckled. »No, no. I am not much supersticious into fortunes. But see,« he waved his arm towards the marching soldiers.
It was not the grandest army, but surely an impressive force never thought to be possible when the Shtakmati State had only just begun.
»Soon Lessat will devour the sun.«
You must log in or register to reply here.
Share:
Facebook Twitter Reddit Pinterest Tumblr WhatsApp Email Share Link
Top Bottom