Bhathairk is one of the largest Orcish strongholds in the known world. It boasts rich trade, a vast population, and even some of the advances of civilization that are otherwise scarcely ever to be found in their settlements. Though its palisades rise tall and imposing, Bhathairk is nonetheless much more welcoming to foreigners than your ordinary tribe.

By and large, Bhathairk is populated by Orcs. Compared to many other strongholds around the world, though, Bhathairk also boasts a large population of other species. From Dwarves to Elves and everything in-between, the various races and cultures of Arethil have all carved their own little corners in this sprawling trade city. There are no ghettos – the visitors either learn to live by Orcish rules and respect their ways, or they leave. Thus it is no uncommon sight to see many of the second- or third-generation immigrants to join up with the tribe proper, where they are embraced and raised as if they were Orcs themselves.

Many locals say that you’ve not experienced the real spirit of Bhathairk until you’ve seen an Elf stalk a grazing doe in nothing but warpaint and a loincloth; until you’ve witnessed an Dwarf arm-wrestle an Orc; until you’ve watched on in awe as Humans stand shoulder-to-shoulder with Shamans, greeting the Spring with song.

Bhathairk has been many things throughout history. In the present, however, the stronghold has evolved primarily into a sprawling trading city. The many auxiliary and ancillary professions have evolved right alongside this – smiths, cobblers, tailors, stables, and many, many taverns, all blossoming like mushrooms after a good rain.

Besides their excellent security for passing merchants, Bhathairk is also boasts some of the best beast-tamers around, breaking and selling creatures that would tear a man to shreds in the wild. There are also several stables at the foot of the hill, renowned for their own breed of warhorses that are prized by knights far and wide.

A big part of Bhathairk’s income can be traced back to the nature of their location – the stronghold, or rather the hillock it was built upon, keeps watch over a fork where river Bystra and Wda meet to form Bystrza. Bystra and Wda both cut long and weaving paths across the flats towards the sea. Much of the mainland trade that’s headed for the coast travels down these rivers: logs from the great forests, perishable delicacies from distant cities, perishable delicacies from proximal cities; and people, of course, transporting the many goods being ferried to and fro. And every last one of them must pay the passage toll. And the export duties. And the mooring tax, if they happen to make a stop.

All these profits can be seen put to use year after year as the city expands in every direction. New bridges spring up on the west side; a network of canals is diverted on the east side; from this grows a blooming field inviting a fresh influx of farmers to try their hand. Like nature itself, Bhathairk keeps evolving even if the process seems chaotic to the outside eye. 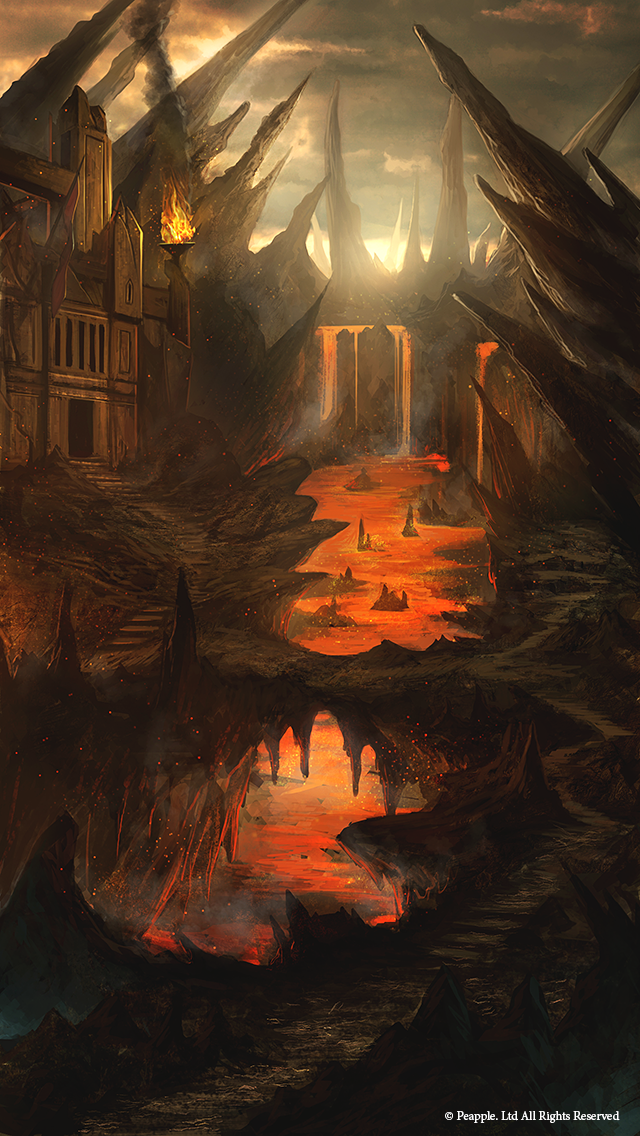 After the Rise of Neha and her Great Fall, the city was left torn like a piece of parchment. Rivers of lava which had laid dormant beneath the undercity had now risen above the surface and poured through the street. It took many days for the people to build bridges connecting the various parts of the city to make it once again whole. It was not just the scattered jagged shards of the city the people had had to try and mend. From beneath the depths, forced up with Neha's rise, had come other odd pieces of architecture that spoke of a long forgotten orcish time.

The Great Bazaar – a feast as fantastic for the eyes as it is for all the other senses. Here the buyer is invited not only to look, but also to touch, taste, and smell the myriad goods on offer. Far removed from the long arm of the Allirian Merchant Council, Bhathairk is strong and established enough as a trade city to impose its own laws on trade, and, indeed, does. Thus the sight of exotic luxruries, foods, and people on sale might seem odd to a traveler from the Allirian reach; someone from beyond the Spine, on the other hand, will find the sight completely normal.

Bhathairk Undercity – The foundations of Bhathairk go deep, but there is deeper still. There are only a few ways into the Undercity. Most are known only to a few. Some have been sealed by superstitious Orcs despite requests from scholars to investigate. More of these openings have appeared since the Fall of Neha. The first level of its foundations were ripped either to the surface or destroyed entirely. However, the first few cautious adventures back below have revealed that a city that had once dwelt far deeper has now been revealed. The lava continues to flow down here and forms odd pools and waterfalls. For the more astute it would seem as though all of these currents were stemming from somewhere far deeper and further to the North...

Bald Mountain – is neither bald nor a mountain, but the name simply stuck. Called Gharnamh Cuir in the tongue of Orcs, the hill makes Bhathairk a hunchback amongst cities. It rises a hundred feet above the Elders' longhouse atop Gharnamh Bhaith and casts long shadows down the streets after the sun dips past the zenith. Despite the copse of trees that stubbornly belies its name, Bald Mountain is well-deserving of the many tales that surround the origins of the stronghold itself. To this day, the Circle of Shamans perform all their rites on its heather slopes. From beneath the depths, forced up with Neha's rise, had come other odd pieces of architecture that spoke of a long forgotten orcish time. The historians and shaman's puzzled over the old glyphs and tried to place these new buildings from their annuals. One such building had arisen from the previous Bald Mountain. Once the ash had cleared and the debris had begun to be cleared around the mountain that had been cracked like an egg to reveal the horrendous beast, from within the broken shell of Earth had emerged a Temple thought to be several centuries old. The Circle of Shaman's have dedicated most of their time since its discovery trying to uncover its secrets.

Mhartoc's stables – while a great many beast-tamers and rearers make their home in the steppes around Bhathairk, none are quite so famous as Mhartoc himself. The Orc has long gone to the eternal hunting grounds, but his many sons and daughters have continued the family tradition throughout the centuries. Their skill with all manner of mounts and familiar is nearly unparalleled. There is good reason for the well-known proverb 'Ride on a Mhartoc, and you will only have to ride halfway'.

Mothers Meadow & The Black Tree - At the centre of the city now stands the Black Tree. It stands on its own island seemingly made entirely of its own roots which delve deep below the lava rivers to the realms below. Its red leaves are a stark contrast to the sleep black bark that twists and twines its way into the sky. Since its arrival it has not deemed anybody else worthy of one of its strange fruits, which it keeps hidden out of view and reach no matter how high someone climbs. The other 'gift' left by Neha is not so unreachable and frightening. The Mothers Meadow has become a small oasis in the middle of the chaos. Beautiful flowers sprout here and attract interesting new wildlife such as Lava Butterflies and Fire Moths. Whenever one is plucked three more grow in its place. The size of a small national park, it is easy to find a brief moment of peace here despite the destruction and hubbub of the rest of the city.

Established a long time ago, Bhathairk has gone through the hands of several tribes and three times as many Chieftains. It has played many roles – a fortified encampment for raiders and a Shaman holy site among them. Its history is purportedly almost as long as the history of the Orcs themselves, and thus nobody can say for sure who established the stronghold in the first place. Various tribes gleefully compete for this honor, but none have unanimously received it yet.

More recent times have seen it grow exponentially as better ships began to facilitate faster trading by river. This caused an influx of merchants into the city, and the practical tribe living there at the time decided to grab the bull by the horns.

In the modern day, Bhathairk is one of the best-known Orcish settlements in the land, in large part thanks to its welcoming attitude and a great care for public safety; the danger of being cornered and mugged in Bhathairk is practically nil. The tribe doesn’t abide crime, and those who don’t abide by their rules bite the dust instead. This zero-tolerance approach to bandits and thieves makes Bhathairk exceedingly popular with merchants, especially those who trade in highly valuable goods. Rarely will a diamond dealer feel as safe as encroached in one of the upper circles of the stronghold.

“You gotta tell me how do you get your shipments from the mines, Carlo. What’s your secret?”
“My secret?”
“Everyone else in the business hires mercs to guard their caravans. Everyone ‘cept you. You always come strolling in with those gems like the roads ain’t swarming with bandits.”
“There’s your secret.”
“What d’you mean?”
“The roads are swarming with bandits. So don’t use them, simple. Use the rivers instead. They run straight from the mountains anyway.”
“What’s stopping the bandits from raiding the rivers too?”
“Have you ever been to the base of the Spine, Feider?”
“Can’t say I’ve had the pleasure.”
“Not much of a pleasure, but— there’s plenty of Orc bands in Alliria, right?”
“...enough, yeah. Too many, sometimes. Why?”
“Now imagine a whole city’s worth. Hardasses, the lot of ‘em. And then… imagine them protecting your shipment.”
“You serious?”
“As serious as Crobhear gold, my friend. There’s not a bandit in the reach that’s got balls big enough to pick a fight with Bhathairk.”