Private Tales What the Sea Holds 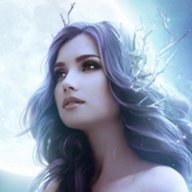 An impulse? She frowned slightly. It was a very deadly impulse. He hadn't faltered, hadn't even flinched as he ended the man's life as though it'd been nothing. Yes, she was grateful that he'd done it to protect her, but it had come way too easily for him. He was used to it, it seemed.

Her violet eyes drew over his face as he wrapped up her wound, her brow furrowed deeply as he told her that he wasn't a good man. She wasn't sure if it was a casual piece of information or a warning, but she followed his gaze back toward the corpse and swallowed as she shot a glance toward the door.

"What now? They'll kill us both.. You should run." her head shook at him.
Reactions: Bastian 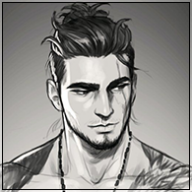 A chuckle escaped him, though it was devoid of all humor.

"Run?" Bastian glanced out the window. There was nothing to see, the darkness of the storm having taken any light. The ship rocked violently from side to side, rain slashing down and pattering onto the deck above.

Bastian gestured to her tail. "I'd drown before I made it two miles."

There was no running. Not for him. He was stuck on this ship, with this corpse, with those that would condemn him. Fingers tightened for a moment and he took in a deep breath to try and steady himself.

"The truth might help me...say that he tried to kill you..." Would that work? Would they even care? Bastian didn't know, but he wasn't like her. He couldn't just jump off the side of the ship and hope for the best.

"Oh..Right." Nina mumbled. Though jumping overboard might have been her idea of freedom, she supposed it would more than likely have meant death for a human. Her tail flopped on the floor as he gestured to it and she chewed on her lip, considering what he was asking her to do.

"I will.." she nodded. It wasn't a lie, either. Though, if she had to face the others anyway, part of her wished that Bastian hadn't bothered stopping him. He'd saved her from death, but nothing would save her from being picked apart.

There were hurried footsteps and when the door wouldn't open, a fist pounded against it. Nina flinched and shuddered, still cowering on the floor behind the tub. She offered a small smile to Bastian, and a silent nod in thanks..

"Best open the door.." she whispered and dropped her gaze.

Should have just cut her throat on the gangplank. A quiet voice whispered in the back of his mind.

It was the insidious little tone, the one that harked for self preservation above any sense of decency or justice. Bastian closed his eyes, shaking his head before he slowly stepped over towards the door and pulled the wooden dowel free.

Before he could even open the panel three soldiers burst through the doorway, all of them holding weapons. The Dreadlord stood behind them, her gaze flickering around the room in an instant.

"WHAT THE FUCK DID YOU DO YOU BASTERD!"

One of the soldiers shouted as Bastian took quick steps back, his hands raising into the air. "I did what the Captain ordered and def-"

A strike landed across his face, and in an instant Bastian lashed out.

He grappled the man that had slapped him, grasping his grip and quickly jerking it to the side. A loud snap echoed in the room, but before he could take it further another soldier struck him in the ribs with the butt of his blade.

Bastian buckled, letting the other man go as a kick was thrown into his side. He was sent onto the ground, crashing against the floor before a loud voice boomed through the tiny room.

It all happened so quickly, but as she saw Bastian go down she reached out.. "No, wait! Stop!" she pleaded, her entire body going rigid at the sound of the Dreadlord's voice.

She gestured to the dead man with her wounded arm.. "He..tried to kill me..The captain told him" she nodded toward Bastian "To watch over me and that's what he did. He wouldn't listen to reason.." she frowned, her breathing heavy as she looked between the soldiers and Bastian.
Reactions: Bastian

The soldiers seemed to freeze, though not because of Inina.

One of them was peering back at the Dreadlord, the other clutching his now broken wrist, while the third stared down at Bastian as though he were less than scum.

The Runaway on the floor breathed heavily, clutching his ribs and letting out a quiet groan. One hand gently moved to the small of his back, fingers flickering over the hilt of his knife. Rage boiled inside of him, slowly rolling through him as he fought for control.


"Is that so?"​
The Dreadlord's voice was a purr, musing on Inina's words as she peered down at Bastian. Her gaze flickered towards the mermaid for a brief moment, and then she let out a dry chuckle.


"Then he should be commended. Pick him up."​
One of the soldiers looked like he was about to open his mouth and object, but lips quickly sealed as the Dreadlord stared daggers at him. One man reached down, threading a hand under Bastian's arm as he wrenched him off the ground.

"Fuck." The Runaway swore quietly as he realized his rib had been shattered.

The Dreadlord stepped forward, her face coming inches from Bastians. She glanced briefly towards the First Mate.


"Well done, boy. Protecting the Prize, though I suspect you've made no friends tonight."​
Bastian grimaced as her words hung in the air, his eyes trailing to the soldiers who were staring at him with hatred the likes of which he'd never seen before.
Reactions: Inina

She looked between the woman and Bastian as he groaned on the floor, her fingers fidgeting anxiously with the urge to help him, the offer on the tip of her tongue. It was either let him deal with the pain he was so obviously in, or reveal one of the gifts these people wanted from her. She swallowed and looked away shamefully when he was picked up, her hands squeezing into fists.

Nina's brow knit and she cast a look up at the woman, not daring to speak a word of what she was thinking, but to Bastian she whispered into his mind as she cast a glance in his direction.

'Are you alright?..'
Reactions: Bastian

His rib had been cracked and pain lanced through him as he stood there. The Dreadlord seemed to shift for a moment, letting her gaze flicker between the First Mate and then Bastian. A sigh escaped her, head shaking for a few seconds before she turned towards the Runaway.


"Good thing you're already in the infirmary."​
The woman seemed almost smug as she spoke.


"Toss him onto the slab, I'll see the surgeon gets to him."​
"I don't ne-aaghhh." One of the soldiers jammed his hand into his rib, pain lancing through the entirety of his body. "Fuck!"

The Dreadlord raised an eyebrow, staring daggers at the men.

She didn't believe him.

Nina's attention drifted between Bastian, the soldiers, the dread lord and the dead first mate, confusion drawing her brow into a frown. Weren't they all supposed to be on the same side? They sailed in the same ship, they had attacked those slavers together. Nina didn't understand why they were disagreeing, why they were killing and beating one another, and who was really in charge..

The mer grimaced as she attempted to pull herself back into the half empty tub, though she stopped as Bastian cried out in pain and she snapped at the men.

"Stop it!" Already she wished she could claw those words back into her mouth. There was little that she could do, of course, but whether it was for good intentions or otherwise, Bastian had stopped the first mate from killing her, and so she couldn't help but at least try to stop them hurting him for it.
Reactions: Bastian

"Yes. Stop it. Lest you want to be turned to a fine paste."

The Dreadlord spoke in that icy voice, gesturing towards the soldiers. The two of them glanced towards her, then at Inina, then slowly at Bastian. There was a moment of hesitation, a breath, then they slowly stepped away from the Runaway.

They seemed to longer for a moment, as if gauging whether or not they could get away with more. After a second more they stepped out and passed the Dreadlord. Both of them were scowling, casting a glance back at Bastian that spoke volumes to their intent.

As soon as they had the opportunity they would kill him. "Thanks."

Bastian said with a quiet groan, not quite knowing whom he was actually thanking. His head lulled slightly, and the Dreadlord looked back at the mermaid for a moment. Her lips pursed.

She said, turning on her heel and heading out the door, leaving only Bastian, Inina, and a corpse.