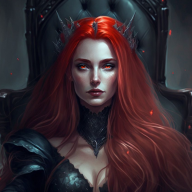 There was no wind in the underground tunnels, but Victoria felt as though she walked against a gale. She did not look at the roiling beings, the light hurt her eyes and the darkness filled her unbeating heart with dread. She pulled the waifish girl by the arm and made a slow progress, crossing the threshold with a tingle running down her spine.

The voices were not just in Harlowe's mind, they spread their prying fingers into Victoria's consciousness and that of the girl. The blonde hesitated, and Victoria pulled her more firmly.


Harlowe said:
YOU'RE NOT EVEN HERE, YOU HIDE BEHIND ONE OF YOUR TWISTED CREATIONS LIKE A COWARD.
Click to expand...

Did it mean Harlowe? Was the shadow above the Him that made her? Victoria flashed to distant memories, overheard conversations long dead. A vampire made by ritual was... someone Victoria needed to have on her side.


Harlowe said:
AS YOU HIDE BEHIND YOURS.
Click to expand...

Where was it. Where was it? The voices confirmed what Victoria had desperately hoped: that the angel was not truly here. That the light was filtered through a conduit, a keystone. That keystone.

She hoped she was beneath the beings' notice, as they seemed quite entwined with one another, and moved towards her prize. The cathedral keystone stood upon a pillar of granite. It was deepest obsidian, and etched into its glassy surface was a symbol. Victoria knew it was there, but her mind could not comprehend it. She could not remember its shape when she looked away. An undead mind with undead eyes: blind to salvation.

Good thing she didn't fucking care. She hauled the girl before the stone, held her firmly from behind and drew the black dagger from her coat.
Reactions: Harlowe 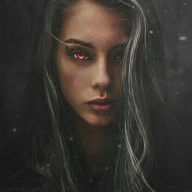 Harlowe swayed but it felt like an invisible force held her up even as the other shook her like a doll. It was like being a toy caught between two children tugging her to and from.

THEY WORSHIP ME, REVERE ME AS THEY SHOULD, AS THEY ALWAYS SHOULD HAVE DONE.

There was a hollow laughter.

CAREFUL, CAREFUL, YOU BEGIN TO SOUND LIKE ONE OF USSSS.

WE ARE NOTHING ALIKE. i AM THE LIGHT, THE GOD OF--
Reactions: Victoria O'Connor

The girl gave a barely audible whimper as the black blade crashed through her heart. When it was withdrawn her knees buckled, but Victoria kept her upright while the flamberge blade unstopped a torrent a dark blood upon the keystone.

At almost the moment the blood hit the sacred surface the light flared. Victoria shut her eyes but she could still feel the heat of it on her back and a hot wind whipped her hair forwards. There was a groan from the dark stone, and Victoria bent the poor child over it. With each fleeting beat of her young heart she gushed more and more of her lifeblood over it. With a deafening crack the keystone split down the center, and the light went out.

Only an act of supreme darkness could cut off the connection to the divine.
Reactions: Harlowe

The crack was almost synonymous with the sudden ear-splintering scream that ripped not only through the room but the entire church. Anyone who had been oblivious to the two forces of nature prowling about the room would now be open to the pure weight of their power but also their voices. Or rather, the force of the being cloaked entirely in white light. Giant fissures broke out along its corporeal body breaking it into a thousand different pieces that shot outwards in one giant wave. Anyone unlucky enough to be pierced by a shard whether good or evil found themselves dead instantly.

The darkness vanished a split second before it met an untimely end and Harlowe's eyes suddenly rolled back into her head as she collapsed onto the cold flagstone floor.

The scream did eventually come to an end and for one, heavy second all was quiet.

Then the church begun to fall.
Reactions: Victoria O'Connor

The scream pained Victoria to her bones and knocked her feet from under her. She and the girl fell hard to the ground, perhaps the only thing that spared them an existence-ending impalement from a spear of light. She had thought that breaking the keystone, the connection, would just cut the deity off from this realm, not destroy it.

The light vanished. A moment later the darkness fled as well. With torchlight resuming Victoria heard Harlowe fall before she saw it. She had barely enough time to register it before catacombs shuddered around them.

She looked to the blonde girl, unconscious and dying atop her, then back to Harlowe. Her time with Fallon had certainly softened her, time was she would have drained the thing dry and left her in a gutter. She still hadn’t placed the connection she felt with the strange vampire, but she knew she couldn't let her die here, so she hoisted the sacrificial lamb over her shoulder and moved to Harlowe.

”Wake up,” she said sharply as dust fell from the ceiling. A second crack heralded a chunk of earth falling from above, and Victoria grabbed Harlowe’s collar and wrenched her out of the room alongside herself before the entire sanctum was crushed.
Reactions: Harlowe

The lights missed most of the monsters who had the eerie sense to throw themselves to the ground before the light sped over their heads. All except dear Samson. The minotaur was too busy staring dumbfounded at the wonderful lightshow of good and evil to think about the itch in the back of his mind from his creator. As such one of the light shards went straight through the monsters chest. He was dead before he hit the ground.

Harlowe, despite Victoria's shaking, was unconscious. Being a vampire it was hard to tell she was even alive on account of not actually breathing, but she hadn't turned to dust and thus it had to be that she was still alive. Jack the banshee appeared by Victoria's side to help with the fallen damsels.