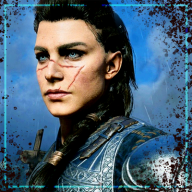 "Anything," Ralene replied, "anything at all except potatoes."
Reactions: Veithir 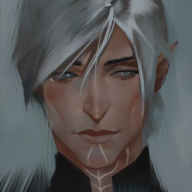 What an odd response. Veithir had never met a person with a distaste for potatoes, and the man himself loved them especially.

"Very well. No potatoesss. I shall return."

They were a long way from his home, so Veithir made do with a selection of simple ingredients. While he would have liked to plate a stunning dish full of complex flavors for Ralene, what she needed was something easy to digest. After spending a few minutes planning, the Hound set to his task.

He returned shortly after he left, carrying another tray with a bowl of steaming soup and a plate of thickly sliced bread.

Veithir unfolded the tiny legs on the tray, set it on the bed for Ralene, and then took his seat again.

Though often she preferred her solitude to company, Ralene almost wanted the intrusion of this stranger to keep her thoughts from spinning out of control. The Initiate could not recall a time when she had been out of commission for such an extended period. It made her feel weak. Made her feel inept. Made her feel like a failure ... and those were three things Ral thought she'd overcome several years ago after she began to find her stride among the class.

But there wasn't anything to be done, that's what she told herself. She'd lost too much blood from the stab wound and hadn't known she was poisoned until much later, when she hadn't the wherewithall to detoxify herself and maintain enough energy to keep marching after the target.

At least now that she was in recovery, it hadn't been a total loss.

And the boys would have the mission handled. They were all three capable Initiates and Edric wouldn't let them get off target. He'd drive them until they reclaimed the Ambassador. The failure on her part was all her's to own. She'd take whatever punishment the Proctor's doled out and pay whatever penance needed paying. Whatever they could throw at her wouldn't be any worse than anything she'd already been through.

Food arrived and not soon enough. Ralene sat up, unfocused eyes only open just enough to catch the shadow of color that represented her savior moving across the room. At first when he set the tray down and took his seat, she just remained sitting there, feeling awkward about everything. Never had she been served food in such a way, or looked after like this either.

It was fucking weird.

But she was starving. So her hands moved forward tentatively so as not to knocked anything over and found their way to a spoon and a bowl. Ral wasn't exactly sure what she was expecting, and maybe her sense of taste was a bit skewed due to her hunger, but the first spoonful was ...painfully good. Blinking, she slowly began to eat in earnest, taking her time to acclimate her stomach to food and to savor the flavor.

After she was about halfway through the bowl, she paused to reassess and also to itch at a curiosity.

"Your speech..." she remarked, trying to figure out how to put it without coming across as a total ass when bluntness had always been her M.O., "what's with the hissing?"

Veithir watched in silence as she battled with herself to take the first bite. Then as she dug in, he reached for the book he'd set aside earlier to continue as she ate.

"Your speech... what's with the hissing?"
Click to expand...

The Fae set the tip of his thumb under a line of text and carefully closed the book over it, saving his place.

He eyed the untouched plate of bread on her tray for a moment, then plainly asked her, "Doesss it disssturb you?"
Reactions: Ralene

Ralene strained to listen and comprehend. It was difficult for her not to think that this was all an elaborate joke, but who would put someone up to such an effort was beyond her. Fae. A hissing man. Soup. This fucking bed.

She did not even register his voice or speech pattern as something familiar. That strange fever-dream she'd experienced the night they'd fled Wissburg was the furthest thing from her mind.

But did the hissing disturb her? A frown lodged itself into her brow and onto her lips, "I ... guess not. It's just ... unusual. What's a Puca? Some kind of snake-person?" That was legitimately more of a joke than anything else, though her grouchy demeanor probably didn't translate it well.
Reactions: Veithir

He awkwardly smiled, "Though, I don't think there are many tribesss that would ssspeak like mine."

The afternoon had turned out to be quite the success. Prolonged conversation was something Veithir greatly struggled with, but he answered her questions easily. And she hadn't struck his face yet, which he would measure as a vast improvement over their encounter in the dreamscape.

Normally she didn't touch bread unless she was prepping for a big mission or battle. After having slept for five days, the heaviness of being completely nonconstructive and utterly useless weighed on her.

"I don't need it," she replied after a swallow of soup and a moment of consideration, "the soup will do."
Reactions: Veithir

"Very well," A lengthy pause as he considered how best to carry on the conversation, "Isss the sssoup to your liking? Isss there... anything elssse at all I can do for you? Or get?"

Had she been in a better mood (a way better mood) she likely would have complimented the soup. Perhaps even opened up conversation about it. Food and meal prep had always been something of a lost art to the Initiates of the Academy. Though they were all taught rudimentary skills for feeding themselves and surviving ... survival didn't readily translate to knowledge in the kitchen or result in gourmet food.

The soup was good. Very good, really, and she was sure it wasn't just her 5-day empty stomach that thought so. However, the fact remained that the dark cloud hanging over her head greatly outweighed the amiability required to say as much.

"It's fine," she replied shortly, "and unless you can get me back to my armor and my companions in the next hour ... then no."

The Hound nodded, unsmiling. Though it was far from the detailed feedback he'd often receive from Baenon, he was pleased to hear that it was a passable dish.

Veithir contemplated the possibility of accomplishing those two things for a short while. No matter how he approached the issue, it was quite simply impossible.