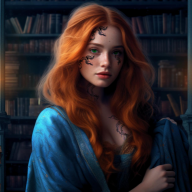 Maeve had seen star showers before but never this close and never so many in one go. They seemed to sparkle stardust across the rivers, the rose-coloured cherry trees, and the grass itself giving everything an ethereal, other look. She slowly settled into his lap, lounging there as if she had done it for a thousand years and not a short part of the day. Her fingers absently ran down the sunbursts she had left on his skin when she had given him a piece of her soul as she rested her cheek against his shoulder. When the show finally ended and darkness settled over the tiny island he had found for himself, she stifled a yawn.

"Can we go home?" she pressed a kiss to his throat and then let her nose graze his jaw. He had made her forget the pains of her torture for a short while but sitting still had made her stiff and now her body reminded her of the iron-made wounds in a not so polite manner.
Reactions: Lorcán 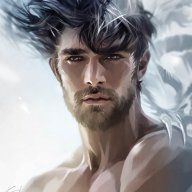 Peace. He could feel his soul breathe and centuries of loneliness were suddenly forgotten, as though it was another life entirely. There were very few times in his life when he'd been truly happy, and when he was the realisation was usually swiftly interrupted by thoughts of his father waiting in the wings to tear it all away from him. Right here, now, this was his. She was his, and here she was safe and so he allowed himself not to worry and just be at peace.

He couldn't stop looking at her. He'd seen thousands of showering stars and they were nothing in comparison to watching her resting against him like this, drawing idle circles on his skin, nor the sight of her growing tired in his arms.

"Home." he repeated, his voice a husky rumble as he felt her lips on his throat. "Mhm." he answered with a deep sigh, his dark eyes creasing with his smile. In one fluid motion he stood and then fell forward off the face of the cliff, cradling her in his arms as his wings opened to carry them in a slow glide over Endora to alight gently on the balcony of their bedroom.

The room seemed to be awaiting them. Soothing incense burned, dozens of candles of all heights flickered around the room, the quilts were folded down, night clothes lay on the bottom of the bed and a steaming mug of herbal tea sat ready for her.
Reactions: Maeve

Flight still filled her with slight trepidation though amazement quickly pushed fear to the side now. In her mates arms she felt as safe as if she stood on the ground on her own two feet. Her mate. The thought still made her dizzy and butterflies fluttered in her stomach so badly she thought she might be sick with happiness. The night was pleasantly warm especially against his chest and no matter how hard she struggled to keep her eyes open to drink in the sights, she found herself nodding off more than once only to wake herself up with a slight jerk.

Maeve had never been so excited to see a bed though the accompanying candles and petals - she made a mental note to berate both sisters - had her thinking of the bed for reasons not to do with the sleep her body craved. With care she slid from his arms and fingered the silken camisole that had been left at the end of the bed with a smile. The colour looked almost as pale as her skin.

"Your people really care for you," every detail in the room screamed it.
Reactions: Lorcán

His brows rose in surprise at her words, and for a quiet moment he stood, rubbing at the back of his neck. It was an observation he'd made but never truly thought about. Where many served his father out of fear or for the craving of attention and power, they served Lorcán because they wanted to, because they'd been shown a kindness and respect.

"My father's people.." he corrected quietly, but offered her a small smile. "But, I am sure they are the happiest of them.." he huffed a laugh.

"My father's people do not always care about me. But here, they feel more my own kin.." Here he could be who he wanted to be, rather than who he was expected to be.

His wings stretched and folded into a shadow that seemed to seep into his back as he padded down the steps and to the side table where he poured a cup of wine. "If there's anything you need, you need only ask. Or." he added as he turned to gesture the large mahogany desk. On it was a large, open book, it's pages blank, and beside it was a silver quill made from one of his own feathers.

"You can write it, and you will have it." he smirked.
Reactions: Maeve

Maeve didn't offer a retort when he corrected her though she did shake her head the smallest fraction. Maybe it was a difference she would learn between fae and mortal, but those who were going to inherit had as much ownership over the people as their parents. The heir was the future and it was in their interest to install confidence in the people they would be a fair and just ruler. Maybe that wasn't how the fae worked. She could certainly believe that from what she had seen from those that used her isle as their personal playground. Suppressing a shudder she begun to peel off her clothes, turning her back to him as she did so.

Even in the candlelight the iron-wrought scars were still vivid angry red lines against her pale skin, crossing over the fainter white marks of her time in the hands of elves. While she might have been young her body was a tapestry of a life of hardship crammed into the space of a few years.

She tugged on the nightdress before turning back to him and the book with a curious frown.

"I don't need anything," she announced proudly then bit the inside of her cheek. "Maybe some clothes, and I don't know what happened to my bow..." she sighed. Aren had sung her that bow. Even if she was given a better one, the sentimental value of that one would be lost.

It was difficult to resist looking over his shoulder as she undressed, but the Prince's eyes darkened upon the scars of varying age scribbled across her porcelain skin. They didn't make her any less perfect, but they ignited a burning fury deep in his chest that he had to fight to contain. In good time, he'd ensure whomever had ever harmed her and were still alive to be found, would be. Starting with Mercutio.

Shadows rippled over his skin and he threw back the cup of wine before dragging his hand down his face, trying desperately to contain the rage that nothing other than blood would sate. It wasn't a side of him that he wanted her to see, and what she needed was rest.

His lips twitched as she answered, and he felt the sorrow she felt over her lost bow. His brow quirked when he realised her attachment to it, and that he himself held no material attachments. It was a curious thing to him, but he frowned as she said she'd work, his mouth opening to protest. He'd been about to say she didn't have to work anymore, but he caught himself before he could.

"You can do whatever you like here.. And clothes shouldn't be a problem." he smirked with a glance to a large, ornate armoire against the wall.
Reactions: Maeve

Maeve found her eyes following his to the armoire and whilst her mate might have found it amusing, she most certainly did not. She grimaced. There had been so many dresses inside, so many things she had no idea how to wear or what occasion would warrant someone having to wear that. Not to mention the pieces which had made her turn as crimson as her hair. She would be having words with those sisters. Stern. Words. Clearing her throat awkwardly she eased herself back into the bed in which they'd slept earlier and she gave a content and happy sigh as some of the pain eased a little.

It almost made her able to ignore the rage she could still feel bubbling towards her though no doubt he kept the storm of it inside. She tugged back the covers in an invitation.

"Right now I want to sleep with you," she settled back down on the plump pillows and watched him through a half lidded gaze. It might have appeared she was on the brink of sleep but she had no intentions of settling until he had too.
Reactions: Lorcán

A smile tugged at the corner of his lips and he dipped his chin at her request. He shed his clothes to his shorts as he approached the bed, the dancing shadows sinking back into his skin, leaving only his tattoos and her marks on his flesh. He crawled under the offered quilt and snaked his arms around her, pulling her against him.

How in hell he was supposed to wrap his mind around everything he felt for her, he wasn't sure, but keeping it all at bay was exhausting. If he let it take control he'd have her locked in here. His. He'd murder anyone who caught so much as a glimpse at her. With all the light she'd brought him, he felt the darkness grow in its shadow in his need to keep her safe and keep her...his.

Lorcan's body shuddered and he let out a deep sigh, his hand combing her scarlet hair back from her face which he caressed with a thumb. He had to rest, he had to accept that she was here and that she wanted to stay, he had to keep his instincts at bay.

Despite the well aimed jab backwards with her elbow Maeve's marks glowed with that inner warmth at his words. She settled back against him and pillowed her cheek on his braced arm before shutting her eyes, content and safe. Those two feelings went hand in hand with every second she spent with him though perhaps if she could feel the emotions he held back from her - that possessive rage that burned like a fury - she might feel a little different. For now, however, Mae was content to let those sweet things tug her back to the sleep that seemed to have been waiting for her the moment she had opened her eyes earlier.

Unlike before, Maeve slept soundly through what remained of the night and most of the next morning. Her body's slow healing took its toll by demanding she rested whilst it knitted bits of flesh back together again. The reward for such a deep and long sleep however was more of the wounds reduced to slim, puckered lines, and the burns around her wrists where she had been bound had faded from an angry purple to a mottled green.