"A sword? Sure, you'll find smithy's a plenty round 'ere. But, if you're looking for summin' that will really give you the edge, go see the elf smithy. She's set up over on Domador Street. I ain't ever seen a man, let alone a woman, bend metal like 'er. There's something about her blades, like they have a life of their own." 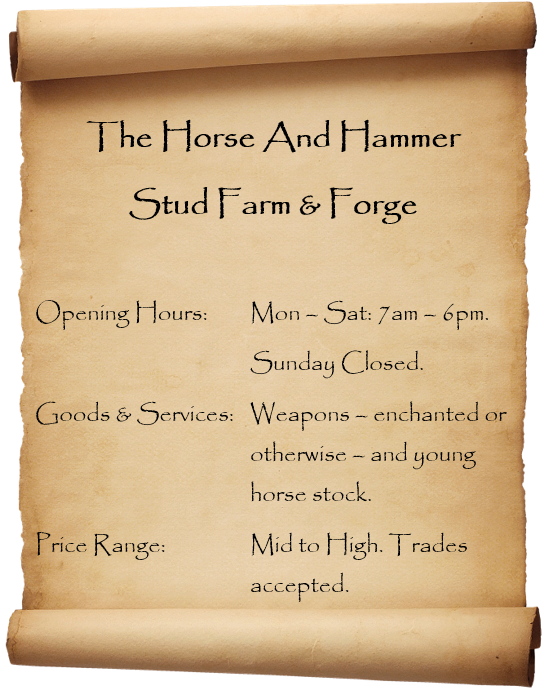 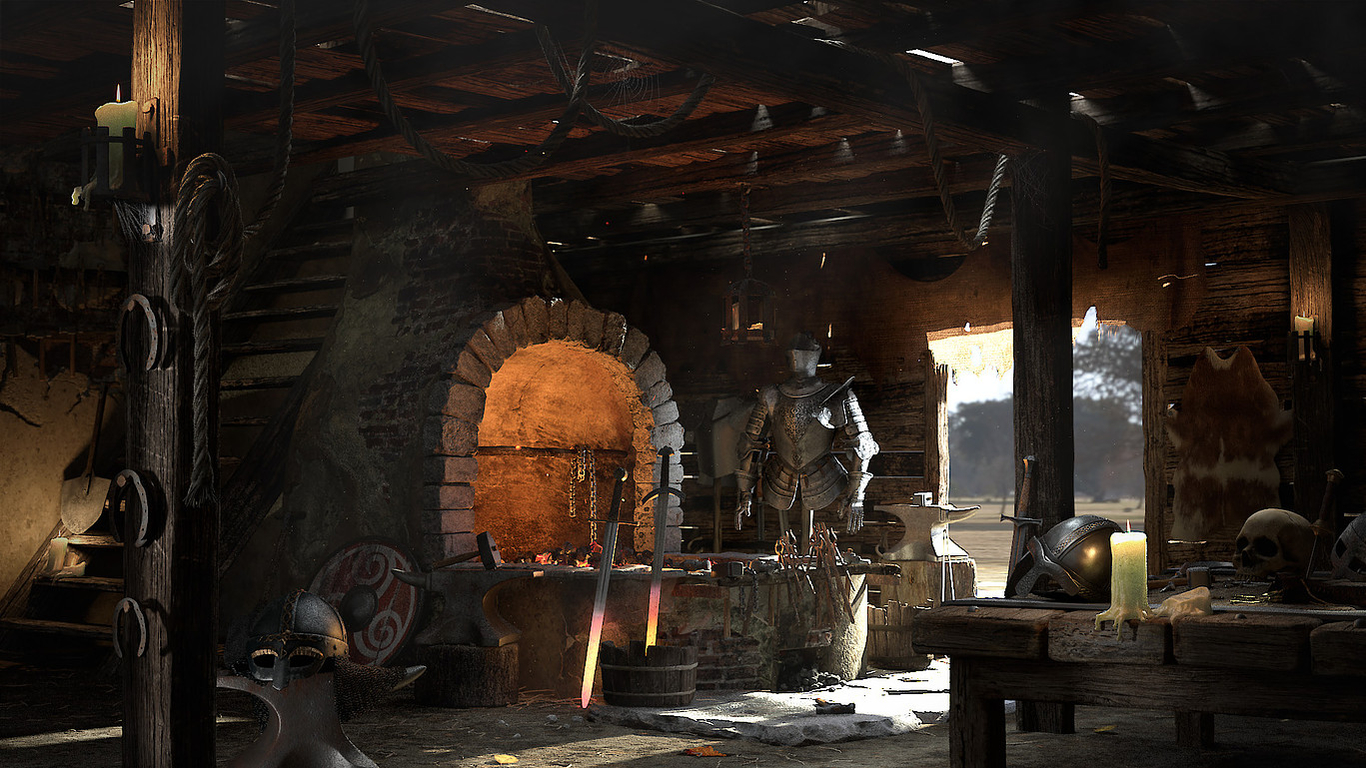 As you approach The Horse and Hammer, the first thing that will really hit you is not the forge itself but how open this part of Alliria is. You're now in the agricultural section of the Outer city. Whilst it is still built up like any heaving city, it isn't as derelict as most of the Outer City - there is room between the buildings and they are made of thick set stone instead of wood, and many of them have gardens or have large fields backing onto them. It is almost easy to forget the medieval jungle of streets at your back as you make your way through this little suburb. The forge is not hard to find, simply follow the sound of hammer on steel. Once you're on the right street, you'll notice the glow of the furnace reflect on the cobbles outside, you might even begin to feel the heat as you approach. If you dislike high temperatures, you might find it difficult to stay for long.

The forge is a single story large building, though the owners house is right next door and has expanded to cover what was once the second story of the building. You'll notice a Staff Only sign by the steps up there - that's the staff room, or as Miriel currently calls it, her living room. The furnace takes up most of your view on entering, the heat you felt inside is stronger in here. If you're visiting in winter it might even be welcoming. The owner clearly runs a tight ship as everything appears to have its own place. To your left you'll find the off the rack weapons which is constantly stocked, though before a loot run this could be a bit more sparse than usual. There's an odd assortment of every type of weapon here of varying sizes and weights. A sign next to the weapons rack reads:

No throwing.
No slicing.
No stabbing.
No stroking.

There's a desk in the corner where the cash exchanges happen, and it appears scattered with drawings and notes of her ideas. The right of the building is entirely dedicated to her art. Three work benches are set up here and all the usual smithy equipment you would expect to see is hung in its proper place on the walls. Whenever you visit there will be various pieces at different stages of completion on the benches. Down this side of the room there also appears to be a stable door, bolted at the bottom but left open at the top. Probably to ensure a constant flow of air. You might see the odd horse pop their head over in the hopes of a treat.

Dead ahead of you and to the side of the furnace are two barn doors which are often wide open. This leads you out into a small courtyard where the smithy clearly carries tasks out such as horse shoeing. However, there are crude targets hanging on the fencing which differentiates the courtyard from the fields beyond. This is where you can try out your weapon before buying, in a safe environment. Don't worry about scaring the horses who populate the field beyond, they're use to all sorts passing through. Miriel uses the constant noise from the forge as a way to desensitise her horses.

The horses live out 247 so you won't see a barn, but there is a small paddock at the top of her fields where Miriel does her breaking.

Míriel Fëanorna moved to the area almost 60 years ago. When she first arrived, it was as an apprentice to the smithy who used to own this forge. It was run down and had a low amount of footfall due to the location - people preferred to buy their goods in the centre of the city. It was not out of choice Míri picked The Hammer as it was called then, her sex meant she was often laughed out of the shop at the others she had tried to get work. The elf and the blacksmith got on surprisingly well, and it was he who taught Míriel the art of a good sale, and honed her elfish skills to suit other races too. When he died with no living family 20 years after Míriel had moved in, he left the business - which was now quite profitable - to her.

Míriel expanded the business to include a stud farm only 15 years ago. She mainly sells the common breed horses, though she does like to keep her eyes out for unusual horses. She has also been known to take in a few injured horses, or those destined for the chophouse, giving them a nice retirement. Whether you're looking for a speedy messenger horse, or more of a stock reliable horse, Miri can probably sort you out with a young colt or filly who will see you through your years.

Are you in a hurry and just need to pick up a weapon and go? Have no fear, The Horse and Hammer are constantly stocked with axes, spears, swords, bows, and various pole arms. There's something here to suit every budget too, from the common iron works, to the more refined blades made of elvish metals.

If you have something specific in mind, or can't see what you're after, have a chat to Miri who does take commissions. Your perfect weapon could only be a few days away from being yours! Please note commissions usually take three days for standard weapons, but this increases depending on complexity. 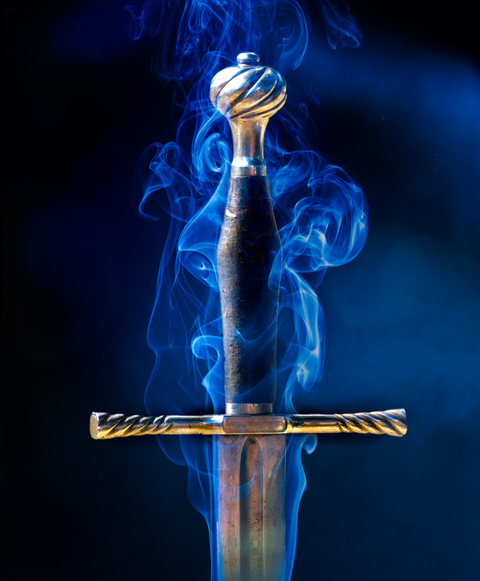 Needing something with a little more umf?

It's said the owner can sing a blade into taking on its own curious personality. She can make glass as strong as diamond, or make it glow in the presence of danger. Just be warned, the weapon can only be made for you and will not work when wielded by someone else. Be careful what you ask for, magic of this kind doesn't always work out the way one might imagine and at times awakening a metal can cause it to take on it's... unique characteristics as ugly personality traits.

Fine print: due to the nature of enchanted weapons we do not accept refunds. If you are unhappy with your enchanted weapon please return it to Miriel for safe destruction.

Miriel owns a herd of 15 horses, which are currently hand reared and backed by the elf herself. There are a mix of breeds here, all common to Arethil. Unfortunately there are no specialised breeds here. The most popular breeds which Miriel sells are the Sleithry - built for sprinting, jumping and for the more genteel clientele - and Destriens - the typical brutish armchair like horses built for large amounts of armour and the life of battle.

The herd is headed by Miriel's own winged stallion Thorlion, however he sires none of the foals himself. It is useless folks, to ask whether or not the elf will breed her prized stud, for she will not. Asking such a question repeatedly, may also get you thrown out sharpish.


Horse Purchase
★ ★ ★ ★ ★
Sterling stock once again from young Miriel, whom I purchased a Sleithry off many moons ago. Unfortunately neither me nor my horse can quite do the cross country courses like we used to, so I recently purchased two Destrien's off the elf breeder. Despite being miles away she delivered me a sterling stud and a young filly on time and with none of this fussin' those other breeders like to do. With Miriel what you see is what you get, and that's the same with her horses. Quality.

- Jono Rivenhead, of Annuakat ​
★ ★ ★ ★ ★
The weapons are great, but what really won me over were the horses! I already love my new steed, Atreyu, and the owner, Miriel, has plenty more for sale, all well-trained. She even gave me some useful riding advice (free of charge!) I hope I can visit again someday. -Tamila Foster

This page has been seen 69 times.