Seteta is a young Abtati who has recently departed the desert of Amol-Kalit to explore Arethil on her own. However, when she reaches Fal'Addas, she meets an intriguing dragon and finds herself headed back to the desert...

Seteta has long, dark brown hair that she wears braided and bound up, usually concealed under a headscarf. Her skin, while slightly darkened by the sun from a life in the desert, has a naturally bronzed hue. Her eyes are amber in color, but with a ring of dark brown around the outer edge of the iris.

Seteta is slender and lithe. Life in the desert doesn't lend itself to fat stores on the body, and while the Abtati may be elven, that same desert life ages them faster than other elves. Since Seteta tends to wear a headscarf, with the result being that her pointed ears are covered, it is easy enough for her to pass as a human when the occasion calls for it.

Her left ear has two golden studs, one in the lobe and one nestled in the curve just below the tip. Her right ear is lined, from lobe to tip, with delicate gold hoops, and yet another matching hoop through her septum. Her lips are not overly full, and are a natural shade of pale red that contrasts the bronze of her skin nicely. 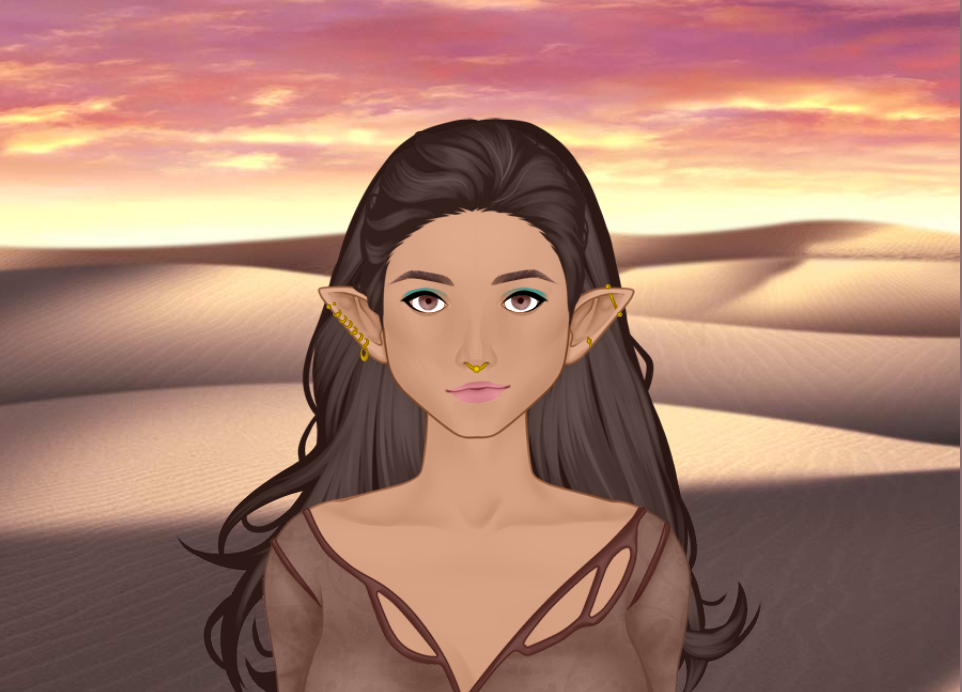 Across the right side of her body swirling, silvery scars looped and whirled over her skin from ankles to ribs as if reaching around from her back to her front in an attempt to embrace her.

She tends to dress in simple garments, usually of various shades of tan or brown, used to blending in with the colors of the desert.

Fighting Knife - made of Telling steel with a jade handle. Loosely based off of this knife. Acquired during Shifting Sands. Lost during Of Sand & Dragonfire when captured (briefly) by a wraith. She intends to recover the knife, but it is unknown when that will be a possibility.

Sand Dune Chopsticks - made from scrap metal, though anything but plain. The ends are inscribed with tiny rolling sand dunes, a pattern of sand and wind that travels halfway down the chopsticks and disappeared into utilitarian smoothness. Gifted to her by Chaceledon during Of Sand & Dragonfire. Lost when Chaceledon abandons the supply wagon when she is capture by the wraith.

Silver Claw Bangle - gifted to her by Chaceledon, meant to ward off the fae, acquired during Of Sand & Dragonfire.

Like many Abtati, Seteta is skilled with earth magic/geomancy, and has a some skill with illusion magic. She is also fairly skilled at tracking, and adept at survival in a hot, unfriendly climate, though the latter is out of necessity.

Not What It Seems: Seteta is able to conjure illusions of many types, but for her the cost of this magic is pain. She most often refers to this as her 'toll'. Usually, the pain manifests in her hands. If it is a small illusion, she may feel pain similar to a paper cut. For larger illusions, she may feel as if her hands are on fire. If she knows ahead of time that she will need the ability to create a larger illusion and hold it for a lengthy period of time, she can begin paying the toll as much as day or so in advance and hold the pain in a reservoir, of sorts, until she needs to actually invoke the magic. [1] [2]

The complexity of the illusion, no matter the size, will also invoke greater pain. Making someone think they see a plain box is simple. Making scars be unnoticeable is something Seteta considers a mid-range skill. Creating the illusion of a building or a person would be extremely taxing, especially if it needs to hold up to actual scrutiny and not just a glance.


Brought To Life: Seteta has an ability that is mostly only seen among the Abtati elves. She can combine her illusion magic with her earth magic to create moving images of stories. The images are only as sharp and creative as the illusionist's imagination, though, so it is a skill that has to be honed over time. [3]

Seteta uses a form of geomancy in which she draws the cost of the magic from the earth itself. If there is no earth (soil, dirt, etc.) present, she cannot use that form of magic, and she is strongest at it when she can have direct physical contact with the earth. While she's had to build up her skills with this magic over time, the use of it is innate, and for her it's as easy as breathing. [4]

However, there are times when she might find it necessary to utilize the pain toll she usually has for her illusion magic for her geomancy, as well. The geomancy is not meant to be used like that, but it can be when the situation calls for it. Doing so (or being required to channel large amounts of magic for long periods of time) leaves Seteta mentally, emotionally, and physically shaken, though, and requires a grounding ritual to get her centered in the present moment again. [5]

Earth Manipulation: Seteta can make the earth take whatever form she can think of, and this has many applications whether for defense (tying someone down with ropes made of mud that are then hardened), offense (creating barricades), or finding and drawing out good quality clay, etc., for builders or crafters to use. She can also use this manipulation to purify water. [6]

Everything's Connected: Seteta can use her connection with the earth to sense anything that is in contact with the ground, or anything within the ground. The range is limited, though. If she were to try and sense the whole world at one time, it would overwhelm her and possibly burn her out and she'd never be able to use earth magic again. The further away a place is that she is trying to sense, the more muffled and distorted it becomes, as well. Her immediate surroundings are the most reliable ones, but using her earth magic simply extends her awareness a little further. [7] [8]

This Rock Makes Me Happy: Seteta isn't sure what the use is behind this ability, but she will at times find herself drawn to peculiar types of rocks. She couldn't say why, but certain rocks, when she holds them, feel 'good' or make her feel happy. Some of them she can use to enhance her geomancy.

Seteta is curious, playful, and stubborn but knows a healthy dose of caution. The sands can hide many dangers, and it pays to stay on your guard. She's fiercely loyal--also a trait from desert survival: if you can't depend on your tribe, you're dead--but as she's recently departed from her tribe and the desert, she's feeling a little bereft and lost.

Seteta is fairly young compared to most species of elves, but she is considered an independent adult by those of her tribe. Life in Amol-Kalit is harsh and often unpleasant, and one learns to contribute and survive quickly if they wish to survive at all.

Her tribe was small and isolated (though they had enough contact with the outside world that Seteta is fairly fluent with the Common tongue), but they were prosperous and strong. At least until their water sources began to dry up.

Recently, she has parted ways from her tribe. The tribe's numbers were dwindling anyway as members left, often being absorbed into other tribes. Seteta decided to take the opportunity to leave and explore more of Arethil.

This page has been seen 160 times.