Private Tales You can run... 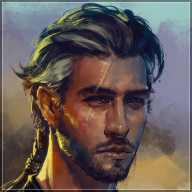 It was time to roll the dice. If he rolled the dice there was every chance it would be his death. He could have kept them in hand and walked away. Eislyn would have remained in her tower and he would never see her again. Faced with that possibility he had to throw them down.

"I am Prince Rayth Tassard, third in line to the throne," he boldly announced.

The men beside the king rocked back, immediately racing to provide advice.

"A Tassard? When his father has men on the field outside? Hang him from the walls where his older brother can see them my king," crowed the first advisor.

"Fool!" spat the other. "If his older brother is on the field that would only make them fight harder. Announce he is hostage and will only be released if his brother refrains from fighting. Then annul the marriage as it was without your blessing. A third son is not fit for Eislyn. Perhaps a first son? It would undermine the Duke's power. " 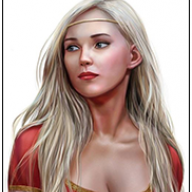 She tensed but didn't risk looking at Rayth. She remained with her eyes locked on her father's. It was strange to hear him admit it aloud. A last name she wasn't sure that he'd ever told her about. Swashbuckler, adventurer - a prince. She knew it cost him to admit it. To say it. And not just because of the suggestions the advisors made but because he'd been running from it for so long. Had never wanted that life.

And for her, he was saying it.

She slipped a hand into her father's. His well dwarfed her own. "Father," a tight squeeze. "Please. Perhaps we can negotiate with them. Show them our alliance instead of war. An alliance of marriage. Rayth is-"

"Take her to her rooms," her father cut her off, eyes locked onto Rayth's like a dragon finding an intruder in its nest. "Watch him and don't let him leave. And if you try anything, boy, you'll be executed." Two guards stepped forward from the wall and, prepared to drag Eislyn away on orders of the king.

Eislyn's grip tightened on her father's hand. "It will kill me," she said lowly and quietly. "If you do anything to hurt him. To keep us apart. It will kill me. You will have already lost me, father. I will be gone like Hannah. Like mother." Her lip wobbled as she looked up to her king. Her father.

That made the giant of a king pause.

Real pain flickered across verdant eyes as he looked at his daughter. "Everyone out," he rumbled. "Except for these two."

"But sir-," the sniveling advisor cut in. The one who'd wanted to hang Rayth.

"OUT!" The king bellowed, not bringing his hand away from Eislyn's.

When they had gone and it was just three of them left in the chambers, he looked between the two of them.

"Explain what you would have me do," he ground out. "Because if your family will not yield and starts an attack against this fortress I cannot promise you your life. And certainly not theirs."
Reactions: Rayth Keirn

Rayth did not know why the King sent everyone away. If he was worried of scandal then it was too late. Looking at the man, Rayth decided that he was the kind of man that would hold no counsel when it came to his daughter.

"I want the chance to try and talk my father's men down. Tell them about the marriage and..."

"Your father does not know you are married?"

"So neither of your fathers has approved of this union and yet you think it would hold weight regarding alliances in war boy?"

Rayth's plan was suddenly mist that he could not reach for. No wonder Eislyn had travelled so very far away.
Reactions: Eislyn Gray

"But we are married now. Even disapproval cannot change that. We did not get married in anticipation of a war among our two kingdoms." She took a breath and took a step back toward Rayth's side.

"Rayth is the only card we have to play against the Duke. If it was not for him, father, we wouldn't have a card to play at all. And don't even think about bringing up an arranged marriage between myself and the Duke. That would not have happened."

A stiffening of her shoulders along with a calm fold of her hands in front of her.

"Call for the duke's men and Rayth's father to meet on neutral ground for a council. Tell them Rayth is here and will be at the meeting along with myself. The alternative father, is war and a siege if you do not do this."

The king's eyes were calculating. He was still giving Rayth a look like he would happily flay him alive.
Reactions: Rayth Keirn

"I am going to think on this overnight. You are going to spend the night as a prisoner," he finally told Rayth. "I will do you the favour of allowing you a room in the tower and not clamping you in irons and sending you to the dungeons.

"We do not even know if Rayth's father is on the field. His forces are supporting the Duke."

Rayth sighed and lowered his gaze. It wasn't good news, but it was not bad news. If the king had a change of heart overnight he could end up dangling from the walls by dawn.

The King turned his eyes slowly to his own daughter, waiting to see if she would summon any protest.
Reactions: Eislyn Gray

Eislyn held her father's gaze. She didn't dare reach out to Rayth even though her fingers twitched to do so. Didn't dare look at her beloved.

"Thank you father," she finally managed, letting her hands smooth down her dress.

Either way, they would face war soon. War or peace. And this entire time she felt the iron of the city wear on her. Stifling. Her magic wanted out. Needed a release. But she didn't dare bring that up with her father. Not yet.

Though, she was certain he'd heard reports from his spies.

One thing at a time.

The king turned to the door where he knew his advisors and guards were listening. "COME IN," his voice boomed. "Escort them back to their rooms while I prepare for council."
Reactions: Rayth Keirn

Rayth decided that right now it was better to not say anything at all. It wasn't progress, but it also wasn't a call for the executioner.

He allowed the foot knights to lead them both away. Out of the door and out of sight of her father. He knew they would soon be taken on different paths. He knew every word they shared would be sent back to her father.

For her reaction, the group must have told her that he was dead. He could see no reason for them to do that. It broke his heart to see the pain it had caused her. How could he make up for that with just words.

"I'm sorry it took me so long to catch up to you."
Reactions: Eislyn Gray

Head turned, drinking the sight of him in. Alive. Breathing.

Heart twisted slightly at his injuries.

Even as there was a tug at her arm to keep walking. He was sorry? He was sorry?! A slight shake of her head at him. She still felt like she might lose him. That she'd find out all this was a dream. That she'd wake up and he'd truly be gone. Still dead.

She swallowed, a pained look crossing her face.

"Just, stay alive," she managed in a strangled whisper. She didn't think she could survive it again. She wouldn't survive it again. She held his gaze as long as she could until they opened a door that wasn't too far away from her own and would shove him inside. She was taken a few steps further down the hall and put back into her room.
Reactions: Rayth Keirn
You must log in or register to reply here.
Share:
Facebook Twitter Reddit Pinterest Tumblr WhatsApp Email Share Link
Top Bottom