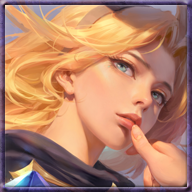 “Maybe…” was all Aelita could say in response.

The sun remained obscured by the clouds. No road could be seen from the cave’s entrance. They were more or less northwest of the ambush site.

Aelita moved forward. Her head keep scanning side to side, up and down. Sometimes, she would stop or make a turn without warning – still going in the same general direction as before.

Rain continued to drizzle down.

Birds howled in the distance.

The sound of leaves could be heard as the wind rolled through the forest.

Then, the sudden, sharp jostling of a branch could be heard.

Aelita stopped and turned her gaze toward the source of the sound. Staff raised…
Reactions: Soleil Verdane That sharp jostling of the branch was intentional.

From all around Aelita and Soleil, they emerged. Perhaps the Fellowship's most deadly attribute was that they were one with the forest, able to effectively appear and disappear as though each shared a common sorcery, making fighting (or evading) them on their own ground a highly dangerous proposition. It made for little surprise then that the since the Fellowship's recent emergence, they had quickly become the leading cause of death for Anirian Guardsmen unfortunate enough to be in the Army of the East or the Army of the South.

Yes, they emerged. Where in one moment Aelita and Soleil were ostensibly alone, in the next they were completely surrounded by overwhelming force, the total number of elves present—with their weapons drawn, bows readied, and spells prepared—beyond what the eye could immediately and intuitively reckon precisely. Though it was certainly dozens and dozens of them, capable fighters all.

From behind Aelita and Soleil, the three Fellowship elves from earlier dropped down out of the trees. Curiously, they too looked surprised at the sheer number of their comrades which had sprung up in ambush—none of the three had any idea of their allies' presence. But the surprise was brief, and they quickly became part of the ranks of the ambushers.

Soleil looked around warily. The overwhelming force of Fellowship elves did not frighten her. Couldn't, for she was incapable of fear in any other context save the threat of rain or water. The rain was indeed the only reason why that small look of fright was upon her expression, but inwardly she was calculating what could be done.

One among the elves stepped forward calmly. He was beautiful to behold, ageless and handsome in that angular elven way, his long hair a brilliant blond not unlike Aelita's own, but his eyes were of a striking gold hue instead.

His tone was pleasant. Amiable, even. "Greetings, Anirians. I am Othellian Clear Sky."

"The Seer has ordained your presence before him." Neither of them was to have their blood be spilled, but this Othellian kept to himself. Instead, in his overbearingly warm and cordial way, he said, "What say you? The weather is quite foul out here, is it not?"

With the sheer odds stacked against them, Aelita and Soleil were hardly given much choice, and Othellian knew it.

When the first elf emerged, Aelita raised her staff as if to cast a spell. Yet more rapidly continued to appear. Aelita’s eyes widened with concern as the number surrounding Soleil and her became too great to even think about fighting them.

A glance to Soleil. The apparent fear on Soleil’s face reflected off Aelita’s eyes. She took a step closer to her ally.

Aelita clinched her jaws. Eyes bounced around as Othellian spoke. With their numbers and stealth skills, Aelita and Soleil likely would have been dead or captured if these elves wished such an outcome.

Yet, instead their received an invitation.

Another Fellowship elf came up behind him and slipped a pair of cuffs into his waiting hand. Soleil recognized the design of the cuffs (and likely Aelita might as well) and eyed them warily. They were nullification cuffs, albeit of elven make, but serving the same purpose as any other of their kind. Cuffs of this sort had been used in the torture sessions Soleil endured back in the old way, for when she was affected by anything which nulled her magic her Sandform body returned to one of flesh and blood. And yes, she knew what it was like to bleed. She knew it well.

Othellian stepped forward. Offering the cuffs to them as if they were gifts of fine jewelry.

"And here you are. Might you each be agreeable and put these on? I will apologize here and now for any discomfort, of course."

Not used to Soleil's manner of speaking, Othellian nevertheless got the gist of her question. "We want to keep things civil between us, yes?"

Aelita eyed the anti-magic cuffs. Soleil was not the only Initiate subjected to these types of restraints. They served as a surefire way to handicap an Initiate and drive them to act without using magic as a crutch.

After hearing Soleil question the need for the restraints, Aelita took another step toward her ally. She leaned over.

In an almost mumbling whisper, Aelita asked, “Any other ideas?”

Soleil saw a bit of Aelita’s magical repertoire already. However, the two hardly interacted with each other prior to this day. Aelita’s knowledge of Soleil would have been limited to rumors.
Reactions: Soleil Verdane

In her case, the rain was an incredible impediment. Dispersing into Sandform would only see her constituent parts all waterlogged and pinned to the ground. Worse, Soleil knew implicitly that being soaked in water, whether dispersed as a cloud of sand or in her imitation body, for too long would have a fatal consequence. And this was to say nothing of all the Fellowship warriors, archers, and mages staring them down.

There was only one option: awaiting their turn.

Soleil reached out, a suppressed groan of pain rumbling in her throat as the rain sprinkled on the thin sleeves of her jacket and through, and she took one of the pairs of cuffs from Othellian. She clamped them on, staggering back as they took effect, fidgeting and convulsing for a moment as her Sandform body transformed back into one wholly human, one comprised of flesh and blood. Gone was the pain of the water, but in its place came that nauseating and disorienting sense of withdrawal.

"Wonderful," said Othellian. And to Aelita, "And you?"

As Soleil visibly shuddered after donning the cuffs, Aelita frowned out of concern. She watched the transformation through the end.

And then when it was her turn, Aelita silently strapped her staff upon her back and accepted the restraints. Just as Soleil had done, she secured them on herself. Her reaction was far more muted compared to her ally. Aelita opened and closed her hands several times. Nothing happened beyond that.

"Now we get out of the rain," Othellian said cheerfully.

The tension lowered somewhat among the ambushing company of Fellowship elves as they emerged from their spots of cover and their spots of vantage. They were not lax, but with the cuffs on the Dreadlords and the situation under control they made ready for travel. Othellian, Soleil, and Aelita were all at the center of their formation.

Soleil did as prompted, following along after Othellian. It was hard to think, hard to focus, when her magic was disabled and she was back in her flesh and blood body. She could feel the pulsing of blood throughout her veins, the weight of her muscles on her bones, each breath invading actual lungs, feeling more acutely all of the little things which normal people with their normal bodies hardly noticed. To them it was nothing. To Soleil it was alien.

So with this, it would be difficult indeed to spot opportunities for escape. She would be relying on Aelita heavily. And this made her even more uncomfortable.

"Indulge me, if you would," Othellian said. "I have always wondered what they say of us, our merry Fellowship, at your...what is it called?...Academy. Anything interesting? Anything fun?"

"Y-You? Elf. N-Not much d-d-different. All the s-same." Soleil's speech was shivering and sloppy, as if she were both cold and drunken. Of the former, yes, she very much was cold—something while in her Sandform body she didn't have to worry about all that much.

"Really? But we've been trying so very hard to garner your special attention." He seemed to be enjoying talking to them, unlike the three other Fellowship elves from earlier. To Aelita he said, "What about you, hmm? Maybe you've been a butterfly on the wall at just the right times in just the places, hearing some colorful profanity cursing our names? Something of the like?"

Aelita followed along with Othellian and the Fellowship elves. She kept close to Soleil. She offered a glance every once and a while to gauge her ally’s condition. Soleil’s discomfort failed to remain hidden from her view.

Meanwhile, Aelita attempted to discretely examine the cuffs she wore. She never maintained the career of an escape artist, but she looked for anything obviously weak in the build or runes to scratch out to disable the anti-magic function.

After that, Aelita’s eyes began wandering. She looked at the other elves, the trees, the way water flowed on the ground down and down.

When asked about how Anirians viewed the Fellowship, Aelita looked up toward Othellian. Soleil answered first. A direct response. It fell in line with the usual rhetoric in the Academy: Falwood elves are the enemy, and the Fellowship is just more of those elves. Initiates need not know a more complicated narrative.

But what Aelita latched onto was, “What do you know of the Academy?”

Neither Soleil or Aelita had previously introduced themselves as initiates.
Reactions: Soleil Verdane

Othellian smiled and cocked his head. "A little this for that? Oh, I'll oblige. Now, what do we know of the Academy? Well, firstly, we know where it is. But don't look too shocked, this has been known for a long, long time. The real problem is figuring out what goes on inside those walls."

Othellian shivered for effect, showing off his enthusiasm. "I'd love to have a peek one day. Maybe when we liberate it I will. I've always wondered: just what exactly do they do to you in there to rob you of your souls? I suppose that whatever it is, it must be very effective on children. It would explain why you...Initiates, yes, that's the word you use...are all so young."

Othellian walked in front of Soleil and Aelita, backpedaled so he could face them, and he rubbed his hands together vigorously. "Are you as excited as I am?"

"Why, to see how much you're valued by your own people!"