Quest To Break a Mountainbreaker 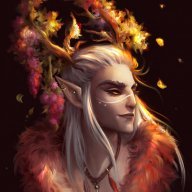 Darkness closed upon the borders of Kaelan's vision. His head swam and his fingers and toes went numb. Try as he may to keep himself conscious, magic's cost had caught up to him. As Taiyo finished closing Ash's wounds and resuscitating him, the summoner smiled, his breathing shallow. At last, darkness took him and he slipped into the quiet of sleep. Within moments, his elemental friends would vanish from reality.


* * *
​
Umi was hardly in better shape than his summoner. His shell scorched from the roaring flames of Zull Du'un and his eye stalk a cauterized stump, the giant crab could do little to stop the Mountainbreaker from ascending in retreat. Lazily, the elemental raised a claw and opened it, and a shard of ice manifested from the steaming air around him. A great, wicked spear, Umi fired the ice shard like a bolt from a ballista at the fleeing dragon. It was more an act of defiance than anything else; with only one eye and little energy remaining, the crab's aim was anything but precise.

Then, with a tired chitter, Umi's form melted and returned to the elemental plane to heal and rest. When the steam cleared, there would be no sign that the mighty creature had ever been there.


* * *
​
Nestled in the tender embrace of unconsciousness, Kaelan's body did not stir. His mind, however, was aflame. A sinister buzzing wracked him, an otherworldly pulling sensation tormented his every extremity. It was as though an impossibly large set of eyes had laid their gaze upon him, staring him down from the darkness from every direction at once. Something called to Kaelan from beyond the aether...something malevolent.
Reactions: Zull Du'un
You must log in or register to reply here.
Share:
Facebook Twitter Reddit Pinterest Tumblr WhatsApp Email Link
Top Bottom