Fable - Ask The sand, it too ebbs and flows 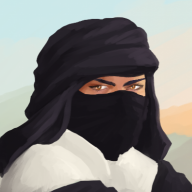 No creature has ever been as insidious and resilient as the sand wyrm that made the dunes it's home. With its scales glistening like gold and its many frills neatly arranged along its body, it was by no means a brutish looking beast.
If only it were not such a pest. Al Mirabet had trouble enough with it.

This time the very nest had to be exterminated. No other solution will do.


As Nineban was a brief stop before the two would have ridden to Mirabet. The White Swallow and his companion, as brief as they may be.
The land proved to tell much of the culture of this place, and the great Anaphite found more commonly here, told of many forgotten places that may still hide beneath the gentle sands.
Of course, such secrets were not told to just anyone.
Reactions: Amailia daughter of Eve 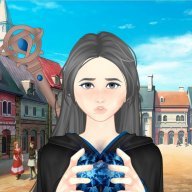 Amailia nervously followed along, she remained far out of her element, unused to the sands, as well as any rocky peaks. Just as far as her uncertainty about the setting went, so did her uncertainty towards what she could actually do in regards to the hunt for the creature known as the sand wyrm. It was not hard to guess this experience would be extremely different to the still dummies, and flying plates she had trained on back in Elbion. The very thought of having to fight something that might fight back still sent shivers down her spine, as she trembled despite the heat.

"Can you tell me anymore about the sand wyrm?"

Amailia hoped that her courage could be found by removing the mystery from the great beast. Or at least receive the comfort of hearing another's voice.
Reactions: White Swallow

The White Swallow dreaded meeting the elder of the village once more. He likely grew evermore tired from every reoccurrence of the wyrms, and likely had much to bark at the seasoned soldier.
» You could look there, « he raised his hand, pointing at an inconspicuous looking dune.
A single strand of grass waved in it.
Reactions: Amailia daughter of Eve

Amailia looked at the dune where he pointed not really seeing anything,

She asked incredulously. Was this supposed to be some type of poetic lesson? Was he trying to say that the sand wyrm was a type of being that clung to its life even in the most inhospitable places? Or that it on the surface went any which way with wind, but below had a firm foundation rooting it? Or maybe...

Many different thoughts ran through her head as she squinted trying to figure out what he meant.
Reactions: White Swallow

The White Swallow gave her a peek before returning his haze to the strand of grass.

Pulling out a bow and arrow, he pointed his aim towards the anomaly.
He pulled and pulled, aimed and let loose.

The arrow travelled and buried itself in the sand near the grass. A mere moment later, a beast the size of a bear uncovered itself, it's fins flaring wide and it's scales glistening in the sun like gold.
Reactions: Amailia daughter of Eve

Amailia's eyes opened wide as saucers as she let out a little yelp.

Still in her panic, she still did not remove her eyes from the great beast. Those wide panicked eyes scanned it moving with the speed of fear, but the precision of a scholar. Taking in every little movement.
You must log in or register to reply here.
Share:
Facebook Twitter Reddit Pinterest Tumblr WhatsApp Email Share Link
Top Bottom