Private Tales Arm For The Poor 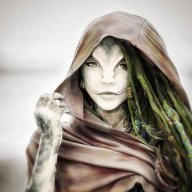 A cruel smile snaked up the sides of Nathaira's face. The poor fools didn't know who they were dealing with, it really wasn't fair. Kala's fluster was endearing, but Nathaira was even more awestruck by the fan of flame that burst from her card. "Impresssive." How many of those things did she have??

The men fell, and those that did not lie silently screamed in agony as their scant clothing burned atop them. Nathaira, whose hands had gone to the daggers at her hips, relaxed. It seemed there was little for her to do, after all. Disappointing, but easier.

She strode into the camp with her tongue flicking through the air. The charred meat was appetizing... the burnt hair less so. She ignored the two men who still squirmed and clutched at their angry, red bellies and crouched beside the fire, plucking free one of many sticks that had been set around it. Skewered upon it was a large (and now slightly overdone) fish. "Thank you," she hissed at the pained men waving the stick around a bit to cool it off before tilting her head back, opening her jaw unsettlingly wide, and sliding the entire length of the fish down her throat. She bit, and pulled out a clean skewer through her teeth, making a very satisfied expression.

Javiki looked frightened by the entire ordeal, not least of which by Kala, and he watched Nathaira with open disgust. His multicolored scales glinted as he turned his head back and forth looking for more bayoumara. He was convinced that more would arrive at any moment.
Reactions: Kala 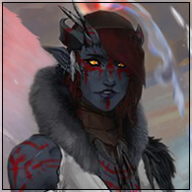 Kala was well aware that people were far too often judged by their outward appearance.

In many lands her people were quite literally considered aspects of Devil's and Demons. Her blue skin color and the tattoos on her flesh did not help with that, and more than once she'd nearly been killed by some overzealous swine with an idea about what kind of being she actually must have been.

Nevertheless, there was something somewhat... unsettling about watching Nathaira eat.

After staring for only a few seconds the Tiefling turned away, regarding the woods and reaching into her satchel. Fingers threaded over the cards there, counting quietly in her head and grimacing when she realized that there were only nine left.

She knew which ones they were what they could do, and half would not help them in a jungle.

If she'd had her other arm still she could have made more, but the magic she required to create them was not possible with what she had left. That was why it was so urgent she find a replacement. Her magic, what she needed to be...well to be what was was, simply couldn't work with only one hand. She let out a sigh, gazing at her palm for a second and closing her fingers into a fist.

Then something caught in her eyes. "Wait."

Kala said as she stopped over to a small bench like log, tugging at a leather strap and pulling out a satchel large. Upon it was branded a symbol.

"I...I think I saw this symbol at the tower." She gestured to the mark on the front flap.
Reactions: Nathaira

“Oh?” she turned, her voice a little muffled by the whole fish that was still working its way down her throat. She discarded the stick and moved to look closer.

It certainly looked like the sort of thing that could have been at the tower. It was angular and intricate, and not at all consistent with these bayou people. She looked over to them and then back at the bag. “These people would not have made something like thiss. A gift, perhaps... or a trophy.”

It’d be a poor ending to her mission if the artificer had been killed and eaten by cannibals, not least of all because the rune wouldn’t leave her alone until she confirmed said death.

“May I?” She asked, taking the satchel from Kala and bringing it over to the one native that was still conscious. “Rafiki, come here!” She commanded in a harsher tone to their former captain.

“Javiki...” he muttered, but he obliged.

“Ask him what happened to the owner of this ssatchel.”

It took him a while to bumble through the sentence, but Javiki did his best to translate.
Reactions: Kala

The answer was more of a story than anything straightforward.

Kala and her companions listened, then quickly had the remaining cannibal lead them to that encampment. Within thirty minutes the menagerie of species stood inside the other encampment, Kala gazing at what appeared to be telescope.

There was a tent on the far corner of the camp, as well as strange sticks poking out of the ground that ringed the tent.

She had no idea what they were, but she suspected some sort of magic.

Shockingly, most everything within the camp remained untouched. "This...doesn't look like he has been taken anywhere...more like he was running away."

But why run away? The tower had appeared as though someone had forced their way in an kidnapped the man. Had that been staged? Put up to throw someone off his trail? It didn't rightly make sense.

Kala looked at Nathaira in confusion.

Nathaira tasted the air as the man spoke. It reeked of his burnt flesh and piss, of pain and fear. This was more of the environment she was used to, and the part of her that enjoyed the savagery was indulging itself. After all, if this was all her life was meant to be, she may as well make the best of it. Call it a defense, or call it depravity, at least it worked.

The cannibal was, thankfully, not mortally wounded and was able to lead them to the encampment. Cold eyes surveyed the scene and concurred with Kala's assessment. "It iss... clean." Clean enough to be the work of an obsessive-compulsive tinkerer for sure, not likely kidnapping thugs or even elves.

She approached but kept her distance from the ringed tent. "Mind that," she pointed, "It lookss warded." She had broken through enough wards to make an educated guess as to what the sticks were for.

Her tongue again gathered scents. There was a notable metallic tang to the air but otherwise normal bayou.

She saw Kala admiring the telescope. "What were they looking at?"

Javiki seemed to be nearing the end of his patience, but given the outright executions he had just witnessed, he held his salty tongue.
Reactions: Kala

Kala looked through the telescope's lens, finding it pointed towards some point in the sky.

She frowned for a moment, and then shrugged. "I can't tell."

The Tiefling wasn't any sort of shcolar. The most education she'd ever received came from the older members of the Reesh Reckoners who could actually read. She had a fair bit of knowledge on something, but the sky and stars were a mystery to her.

Lips thinned for a moment and she looked at her companion.

"Can you undo the wards?" She had a card that could do it...but she was loathe to use it now. There were so few left, and she wouldn't be able to create any more if this whole venture didn't work out. "I think...wherever he is we'll find a clue for it inside."