Nathaira has the proportions of a much taller woman while being of average height. She is very thin with notably long legs, arms, and neck. Her nose is almost totally flat, with small pits running up the sides and along her upper lip. Her lips appear normal, if not a little wide, but her mouth actually extends much further back along the sides of her face. This is not normally apparent until she unhinges her jaws and reveals sharp fangs and a forked tongue. 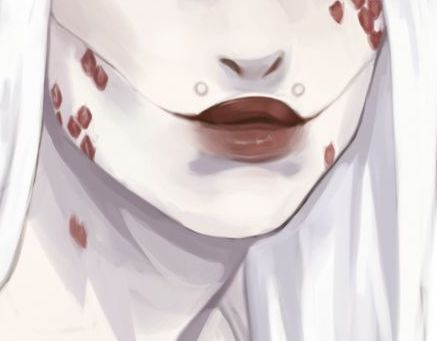 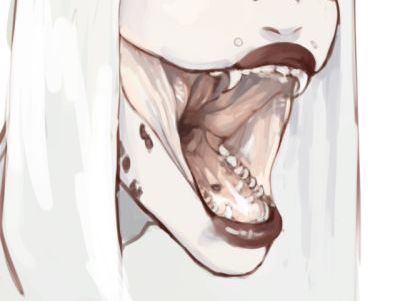 Her skin is pale green and is somewhere in between normal human skin and soft scales. She has some areas of harder scale, such as the backs of her arms and legs, and a few tracts along the rest of her body.

Her hair, mossy green and unkempt, is usually coiled into dreadlocks.

Venomous Bite: Nathaira has long, very sharp fangs that are capable of injecting venom into anyone she bites. The venom is extremely potent and lethal to most creatures within minutes. Excruciating pain is immediate, and paralysis usually follows within seconds. Coupled with the ability to unhinge her jaw, she can end fights against most opponents this way. She usually coats her weapons with her own venom, and has been known to secrete some of it into her mouth and spit it at opponents. Venom production takes time and energy, so this resource must be carefully managed.

Poison Expert: While her venom is potent, it must be injected or absorbed into the bloodstream to be effective, and is completely inactivated if ingested. When her work requires more subtlety, Nathaira has been known to employ a wide variety of poisons.

Heat detection: The pits along Nathaira's upper lip and nose are heat-sensing organs, capable of detecting infrared radiation. While they are not nearly as precise as her eyes, they can locate heat sources, often warm-blooded creatures, in complete darkness with surprising accuracy.

Vomeronasal Organ: Nathaira has an excellent sense of smell, flicking her forked tongue out to gather scent and then inserting it into two holes in the roof of her mouth.

Serpent Strike: Short, quick movements, like stabs or lunges with her fangs, are extremely fast.

Cold Blooded: Nathaira is extremely vulnerable to changes in temperature, moreso to cold. She is generally quicker and more energetic in warmer climates, but this has its limits.

Chameleon Magic: The masters of the Forsaken were not content with Nathaira's natural abilities, and so through a series of horrifying magical experiments she was granted limited magical abilities, the most notable of which is the ability to become invisible. This is most easily accomplished against simple backdrops while she is standing still. The quicker she moves, or the more complex the environment, the more difficult this ability is to maintain.

Shunned, reviled, and tortured since she can remember, Nathaira takes most pleasure from her work. However, she welcomes most distractions from her miserable existence, and would likely engage in more of them if her appearance did not terrify most people she met.

She generally appears to be in good spirits, mostly because she knows that if she were to truly reflect on the horrors of her life she would descend into madness and despair.

Beneath the scales Nathaira is curious, diligent, and ruthless.

Nathaira's mother was a boisterous explorer who ventured to Nagai with a small seafaring party. She returned, alone, and with child. By all accounts Nathaira's conception should not have been possible, and her mother was almost immediately beaten to death by her friends, family, and neighbors (lead by her husband) for her transgressions.

Nathaira would have been slaughtered as well, had her one-of-a-kind birth not been such a curiosity to the Dreadlords who took her to the Forsaken.


The Forsaken (excerpt from Aila's biography):

"Much like the famed Dreadlords of Vel Anir, the Forsaken are trained from childhood for their specific purpose. They are experts in their fields and rival even the greatest of assassins in the world. Despite this similarity however, the Forsaken hold some key differences from their Dreadlord siblings.

"For starters, each Forsaken is a half-breed. Sharing the blood of an Anirian and some other species, the Forsaken are shameful secrets, they are not celebrated and more often than not are given up willingly by their parents, often with as little fanfare as possible.

"The training of a Forsaken is also far more cruel than that of a Dreadlord. Though this hardly seems possible given the reality of the Academy, the physical violence and mental torture endured by the Forsaken is so horrid that only one in ten of their ranks survive to actually 'graduate'. This is often also due to various magical experiments and tortures that the Forsaken undergo, and unlike Dreadlords, they are considered far more expendable due to their heritage.

"Upon the completion of their training, each of the Forsaken is also marked with an incredibly powerful piece of Rune Magic. This mark allows those in charge of the Seven Houses, or those who know the correct phrase, to give the Forsaken basic commands. This ensures that the Forsaken must be pliant and will never betray Vel Anir."

This page has been seen 231 times.