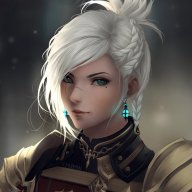 Sequestered away within the Academy lay a particular courtyard. It was smaller than most, but it was private, quiet, and most of all, it was heavily warded. This courtyard served a specific purpose, and it had been a personal request of Proctor Evangeline D'amour upon confirmation of her tenure at the Academy. This humble place, lined with gravel and sand, equipped with dummies and targets, was Evangeline's private training ground.

Indeed, retirement was no excuse to let oneself get out of prime shape--or as close as one could come when what was likely permanent nerve damage affected your ability to fight at full capacity. Sigh. 'Those who can't, teach,' after all. Evangeline tried to ignore the inanity of such thoughts as she worked through her routine.

Perfection demanded repetition. House Pirian demanded perfection. Her grunts of exertion echoed through the courtyard as she practiced, a bead of sweat dripping from her brow as she awaited the arrival of a promising, young pupil: one Vance Calgrave. In time, he would learn what it meant to be a proper warrior.
Reactions: Vance Calgrave 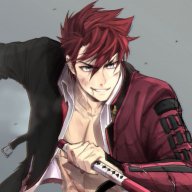 Vance made his way to the courtyard in good time. Contrary to what might be expected, he was rarely ever late. None of them were often late... not when the consequences were so high. Now, perhaps, he would not be punished so harshly, but the lessons had stuck.

He hadn't been to this courtyard before, which was odd given how he'd spent almost all of his life in the academy. Or maybe he had and had forgotten? Whatever, unimportant.

The soft clack of his boots on stone began to fall in time with Eva's vocalizations as he drew near, thick copper dampeners tapping from his heels mixing with her grunts and light footsteps. He liked that she was training, liked that she appeared to practice what she preached. It did make her more human, though, which was something Vance figured most proctors were trying to avoid. Some, he was sure, would prefer to be thought of as gods.

"Proctor." He stood at the edge of the courtyard, tall and at attention. His eyes, however, gave away a gleeful excitement to train with the woman who had bested him so easily.
Reactions: Evangeline

One final shout and an accelerated slash saw the head of one of Evangeline's training dummies severed. It tumbled harmlessly to the ground as she sheathed her blade back within the confines of her cane. She turned to face Vance, icy gaze pondering over him, reading his anticipation.

"Initiate," She greeted him in kind, stepping towards him with the familiar three-tap clacking of her gait. "Punctual. I like that."

His posture was straight and he was at least attempting to be formal. That was a good sign. His temper back during their spar was something that had worried her before, and she imagined that other proctors had either encouraged the behavior or neglected it entirely. It was one more thing she'd have to train out, and in such a limited time span. It was almost a shame the revolution hadn't happened sooner.

"I've read your file, so I have an idea of what you're presently capable of. Your survival up to now and your performance during our demonstration also informs me that your potential is greater than zero. I have my share of observations on how to aid you in improving, however," She examined him carefully. Wrinkled uniform, one edge partially untucked. Sloppy. "I'd like to hear if you have any ideas in that regard."
You must log in or register to reply here.
Share:
Facebook Twitter Reddit Pinterest Tumblr WhatsApp Email Share Link
Top Bottom