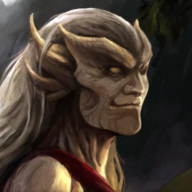 Youngest Son of the Trothar Clan

Vel Anir... As massive as the ancient dragons of legend, and just as imposing. For a city, it looked alot more like a gigantic stronghold with a complex layout. At least that was the impression one immediately received from it. To a nonhuman, the city had a strange way of seeming gloomy even when the weather was fair. And this evening the weather was very fair indeed. The sun was journeying down towards the horizon. And a young komodo who appeared very much like a muscular male, with green scales and long white hair was walking through a market with two human who appeared shockingly low class and crass. It hasn't exactly been his choice to be here. But it certainly beat stating locked away in the dungeons.

Days in a cold cell with an iron muzzle on, spent mostly being beaten by the guards, had turned into weeks. After a while, the green warrior found that he was taken out of his dungeon cell and into a meeting room. Ezelbeta Pirian, the noble woman he had been accused of robbing was there waiting for him. At first he held out hope that she would realize that he was not the thief, and that he would be set free. But her words revealed that a more sinister intention had been at play all along. She told him that she had a job for him. In exchange for his acceptance of this mission, he would be allowed to leave the city a free man. The komodo listened to her assurances that he would be dealt with as a true friend and ally of House Pirian if he agreed. And as he listened, he learned that she wamted him to publicly assassinate a politically moderate elder of House Urahil. One Aenoudus Urahil, or Aenoudus the Brave as he was known by the common folk of Vel Anir. Apparently he was a local hero in his youth.

When he asked why she needed him as her assassin, she said that she needed the local population to once again see the other races for the monsters that they were. Especially the Urahils. Duago was promised that if he made the killing as shocking and public as possible, that he would be allowed to escape by the guards. But if he tried to make a run for it before that, they wwould kill him for escaping from the dungeons. Until the time came to make the attack, he would be given a room at a local inn and she would have a contact their keeping an eye on him who could also provide coin for whatever weapons or armor he required.

"Duago does not wear armor," the masculine komodo had proudly insisted through his thick, reptilian accent. "Kwenniavei and his scales will be the only protection he will need."

Kwenniavei was the old Komodan word for the spirits. And his words, seemingly to the human woman, were actually an appeal to them in disguise. Even as he sat, he had clarified this with tail talk so that the spirits would see, and know. He was actually asking them for protection from this human woman and her schemes. His Clan's priestess had taught him some of the stories of how humans had deceived his people long ago, and made them into a race of slaves to work in the mines on land which was once their own. He may not have been a great scholar by any means, by the spirits he couldn't even read written common, but this young green komodo had no illusions that this one would honor their agreement once she had gotten what she needed out of him. At that point it would be far simpler to kill himand leave no one to tell the tale of what really happened.

Still, he had eventually accepted her offer, seeing as how the alternative was to remain locked up. If he pretended to be taking time to prepare for the assassination, then he might just find a way to sneak out of town on his own. And if he could do that, then he would be free to find his clan once more. It was a slim chance to be sure, but he wasn't likely to get a better one anytime soon. Ezelbeta seemed surprised that he had accepted, and congratulated him on making the wiser choice. Hinting that it would have been painful if he had not.

And now? Now he was being escorted by House Pirian guards disguised in peasants clothes and pretending to be his good friends as they told him how much he would enjoy the service at the Red Rat Inn. He did little in the way of responding, and walked as a prisoner of the men on either side of him. Although it would not be obvious to the average citizen, anyone who was perceptive and not blinded by racism would realize that something was slightly amiss with this picture.

"I'm telling you, this is the only place to stay and get drinks while you're here in the city. The way other inns and taverns charge, you may as well walk right in to the local dungeons and ask 'em to stab ya with red hot pokers." The humans chuckled a bit too much at that remark. The one who had said it especially. He was a red haired strong man with dark eyes and a broken nose. And he found his own joke just hilarious. The komodo did not so much as crack a smile. But the other human, a scrawny bald man with a voice like grinding gears in some kind of lost dwarven machinery, picked right up on speaking, anyway.

"And of course you'll always find Gavin Blackmane at The Red Rat. Now you need anything, Blackmane's the man can get you squared away quick. He's got all the information you might need while your in Vel Anir. And he'll get you access to all the best equipment around." This human almost seemed to wheez and whir even after he stopped speaking. Of course, the strong man then had to add his commentary.

"Aye, and don't forget to let Blackmane know when ya gonna be makin' these moves to impress that Lady ya care so much about impressin'. Without him on board and backing ya, local guards might take offense to you messin' about like that. Might lock ya up on the spot too..."

All the while as they went and the humans offered veiled threats and 'guidance:, the komodo waved his tail around in the tail talk language. It was a long shot, sure. But if any of his kin happened to remain in the city and see him, they would know he was asking for help and also warning that the guards had him under surveillance. Of course if his kind weren't randomly wandering around Vel Anir, this would prove a quite pointless exercise. Well worth the risk however, as who but another komodo would understand what his tail was saying?
Last edited: Jul 24, 2020 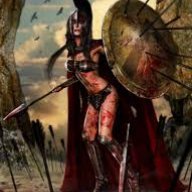 Nikaia was beginning to expect missions like this one to go wrong. She was sent into Vel Anir as one of her City's "scouts" who were meant to keep an eye on the city garrison, private guards and the local underworld. In other words, she was sent as a spy, sent into the city to lodge herself into it's underground, clear up some space for more members of her city, and slowly take over the cities mobs and noble houses so that they could be crippled and conquered with minimal resistance.

Now Vel Anir wasn't considered a city to be conquered by her home's Senate, it was however considered a threat, and so the idea wasn't to make it offensive but defensive, by making sure that if they intended to attack them, they'd know about it long before it was ever announced, and it could be thoroughly sabatoged and crippled long before it gained any momentum.

She had already set up a few contact in the city using her government-mandated bribes, threats and various forms of persuasion. Needless to say, she knew a little bit about what was going on in the city, and one of the noble houses who just happened to be giving her trouble was none other than House Pirian. So, she had established a few contacts among the House Pirian servants and slaves, all of which heard significantly more than anyone other than those who bribed them gave them credit for. That and a lonely prison guard was keeping tabs on what was going on and why as well as when, she really didn't like him and she wanted nothing more than to bleed him to death, but he was proving instrumental in many of her operations and he was her only prison contact so she had to suffer his presence for now.

But at that moment she was in the market stall that she had set up as her home base, it had a narrow room hidden in the back where she slept, and it was there that she recieved all of her information. That was a day when all of the reports had been recieved, and she was made aware of the Komodo and his particular problem. So she, following her Senate's command, took every opportunity to throw a noble house off balance and silently take over their infrastructure, that meant freeing the Komodo and using his particular position to her advantage as well as his should he be tempted by revenge.

And there he went, flanked by the two guards disguised as his friends, and speaking as friends do. But she wasn't fooled, she often wasn't. No, she had to take care of this mess, and ensure that it played out the way her city intended it to. It was time for a rescue.

Nikaia was a well built, tall, muscular but slender woman, normally she'd carry her hoplon shield and doru spear, but she was only equipped with her sword for now, whic was hidden under her crimson red cape, which had one of the bottom corners pinned up by the brooch on her left shoulder, offering her a little more modesty than was typical for her or women of her city, a leather top that stopped just below her bust, leaving basically her entire midsection exposed, that had thick leather shoulder plates, a skirt of leather straps that fell down to her knees with the typical undergarment of red cloth underneath. At her hip was a xiphos sword, her calves protected by bronze greaves and her forearms protected by vambraces. And now, she was off to speak with someone, and hopefully get him free so that he could help her.
Last edited: Aug 3, 2020
You must log in or register to reply here.
Share:
Facebook Twitter Reddit Pinterest Tumblr WhatsApp Email Link
Top Bottom