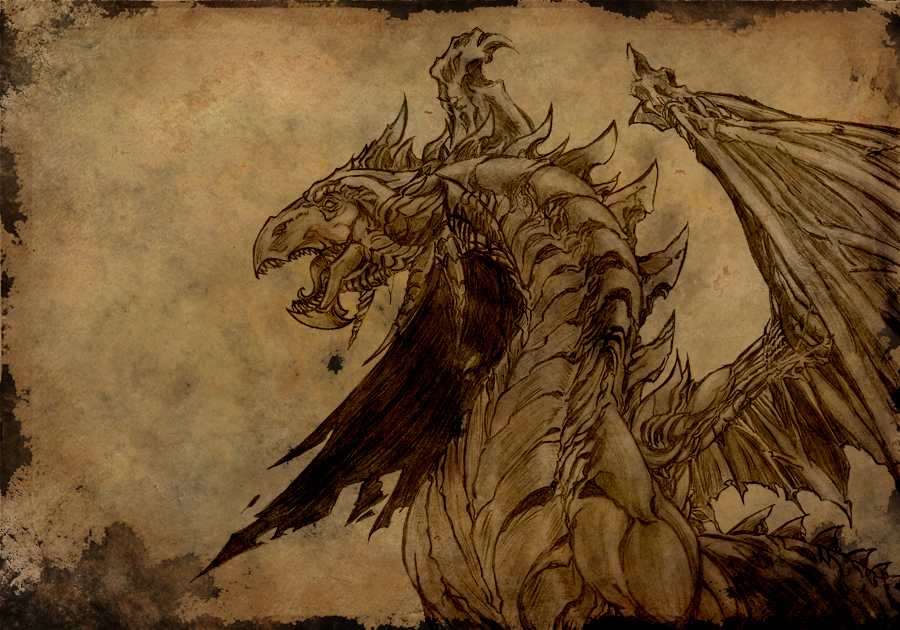 [1]​
All across Arethil exist the legends and myths of mysterious creatures; the Dragons. They are held equally in awe as they inspire trepedation, for they say that to stand in the presence of a Dragon could verily test the intestinal fortitude of the bravest knight.

From what can be found from documented scrolls and tomes on the subject of Dragons, there very well may exist a vast variety of the creatures. Be they small in stature or massive in size, they all maintain a version of typical physical characteristics. For some, they may have wings while others may appear more serpentine. In all stories, they appear to be able to breathe out a form of energy. Accounts may vary, but common legends state this could be any form of elemental energy.

Tales of such creatures named Dragons span across the ages from the western coasts of Liadain across the lands and seas to the far east of Espressa. Some say it is a serpent-like creature of legends past. Folklore about dragons across Arethil vary drastically by region, but they have been depicted as winged, horned, four-legged, and capable of breathing fire to wingless, four-legged, serpentine creatures.

Some say they resemble giant snakes. Others believe they can soar to great heights, channeling the very primal sources of the magic of the Sun, the Moon, the Sky, the Ocean, the Earth, and the Stars. Be it the fiery breath of the Sun to the thunderous power of a storm, Dragons are said to be powerful conduits of magic, perhaps, even created by the primal elements themselves as their physical manifestations. It is said that a fully grown dragon possesses great strength, understand many tongues, keen intelligence, and long-lived. The validity of such claims has never been determined by the men of Arethil, for interactions with dragons had been few and far between, tales spoken over an open fire underneath a starry sky.

Yet therein still exist tales of ways to kill a dragon. Some say that enchanted weapons are required, others, simply state it requires some ingenuity. There is some truth to the legends of old. Heavy weapons may verily be able to penetrate a dragon's scale armor, for even a dragon can be felled by the stroke of a lance through the heart or through a battering of damage that can kill a similarly sized creature.

The true extent and the validity of these rare creatures are up to debate. However, one cannot deny the stories that trickle down from one culture to the next. For some, they are a legend and a myth. For others, they are a tale backed by blood and flesh.

Before, there was no time, no earth, no dust, nothing. All was forgotten.
And what was falsity became a verity...[2]

Whatever and wherever the truth of their origins may reside, it is said that the creatures that the First Men came upon were of a similar description as told by their forefathers. Although there were a few discrepancies, the Dragons of Drakiall had wide wings they could use as extensions of arms themselves. While large, they were not massive beasts, but slender in form to provide a deftness of flight within the air. They could grow as large as a ship, with dark scales that lined the entirety of their bodies. To the casual observer, they would certainly bright forth a measure of awe and trepidation.

~An excerpt on the Landvættir of the West, the Dragon Guardian of the Eretejva Tundra.