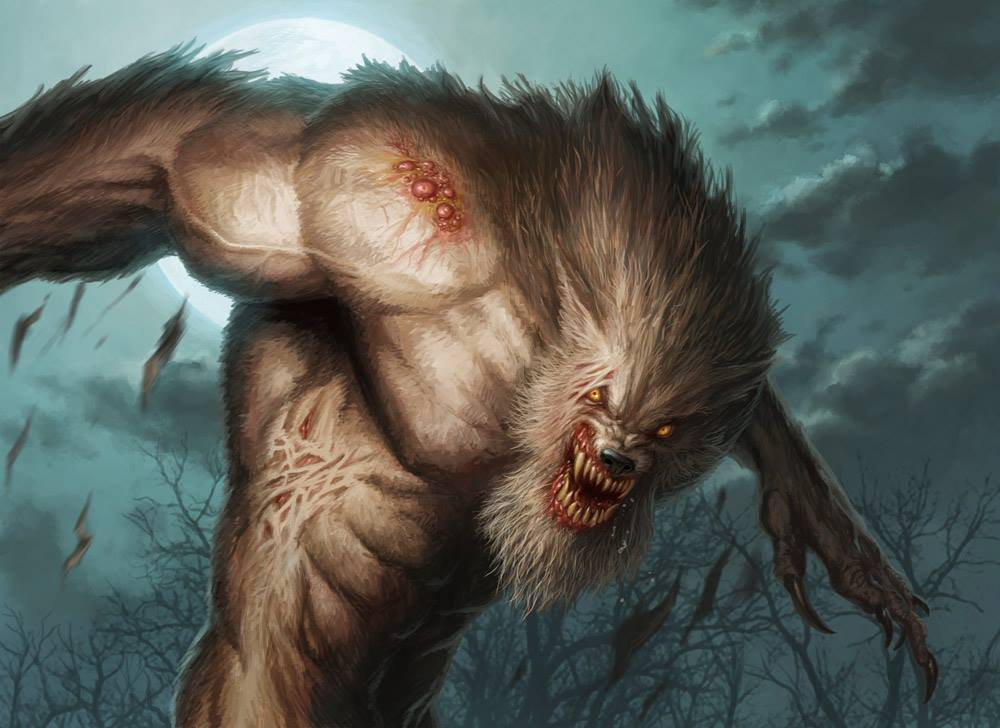 As the full moon of Pneria[2] rises over Arethil, another dreaded beast comes howling out of the shadows – the Werewolf. They are wretched beings that turn into fearsome and deadly near-wolves in the light of a full moon. The condition is said to be caused by an infection called lycanthropy. Werewolves appear similar to wolves, but are larger, stronger, and lose their mind during transformation. They have existed for as long as man and animal have roamed the land.

Much like vampires, they are not born nor are they changelings, but rather created through the bite of an infected transformed Werewolf. Little is known of the disease – if it even is an illness – beyond the fact that it spreads via contact between the saliva of a transformed werewolf and the blood of the victim through a bite. Thus the bitten will become a werewolf themselves.

In nearly every rural settlement or city, one can find tales of large, feral, wolf-like creatures terrifying townsfolk on the nights of a full moon. Beloved kin and livestock are found viciously mauled and eaten, prompting the heavy persecution of these large near-wolf creatures. Werewolves are actively hunted down and killed, for a transformed creature will lose its mental faculties and turn into a bloodthirsty predator attacking any living creature in sight just to feed.

Whilst people infected by the werewolf disease typically retain all the same traits of their species, some strains change the host significantly. The physical prowess of those infected with lycanthropy is said to increase by a moderate degree when they are in their transformed state.

Much like with Vampirism, various scholars over the years have discovered that Lycanthropy has split into different strains of the same illness. The infected victim begins to suffer from a more bestial nature, most often transforming and becoming something apart from the person that they once were.

All strains have been found to have the following in common:

Most strains of lycanthropy force a transformation upon the victim, making them stronger, faster, monstrous, and bestial in nature. This happens once a month to the full moon of Pneria. They retain the memories of their act, but have no control over themselves during the transformation. Most werewolves are unable to be infected with vampirism.

It is said that the only true method of killing a werewolf is through the use of silver weapons. However, werewolves can typically be killed through conventional means. Blunt force trauma to the head, decapitation, being stabbed in the heart, and severe blood loss can usually kill them.

Other strains have been seen where the transformation becomes permanent or where the host can make the change controllable.

There is no known cure for lycanthropy, and those blighted with the curse are effected by the Full Moon of Pneria. Whether they become a monster or simply grow more irritable, the link is always there. This is not to say that Lycanthropy is incurable, but no method has yet been found.


If your kin was bitten by a werewolf, it is best that you put them out of their misery, for you can sure expect them to kill you and everyone around you with nary a wisp of hesitation. You're as good as dead once the full moon rises high and that unfortunate soul has no choice for what is to come.

Don't be fooled, they may look like your kin, but come the turn of the month, they'll not have a care if you are a wife, brother, or daughter. You'll be on the floor with your throat ripped out and a feast to be had before the night is done.


Lycanthropy is a disease, but how that disease takes root in your character is up to you.

Documented above is the 'core' of what it means to be a Werewolf on Arethil. This is the only real requirement when creating your own strain of lycanthropy. As long as the strain fits these principles of the disease then the abilities of any werewolf simply have to be balanced.

There should be trade offs for your line of werewolves. Typically Werewolves are stronger, faster, and take on the tendencies of a Wolf. This is traded off by the disadvantage of changing once a month involuntarily depending on the moon, being in immense pain, and essentially becoming a monster.

These are the core principals you should keep in mind when creating your strain of Lycanthropy. For instance, if you want your werewolf to be able to transform whenever they like, you can tone down the physical prowess that comes with the transformation.

Other examples could include: