Fable - Ask The Jaws of Judgement 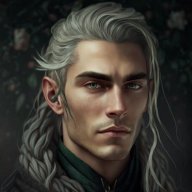 There was a myth amongst the humans of a round, jolly fat man who had a list of all the children who had been good and bad that year. On the darkest days of winter this old man with his rosy cheeks would leave presents under trees or in stockings hanging by the fireplace for all those who were good, and for those who had been naughty the sadness of having nothing to open in the morning or receiving a lump of coal was meant to remind them of the consequences of being bad. A young human had once told him the story as she lay in his arms and he played with her gold-spun hair or perked nipples. She had laughed at the similarities between this Saint and he, the Erlking, who was said to have his own list of those who had been good and those who had been bad.

She hadn't laughed when she had discovered what it was Midir did to those who had been wicked.

The King of the Autumn Court always thought of that story and that woman as he ran his eyes over the list. Delun's neat handwriting condemned each name upon the page to a gruesome death, but it was a death that needed to occur in order to keep the balance. Whilst the other courts busied themselves with the trifling issues of courtiers tricks, Midir was the one ensuring order was kept across the faerie realms. They might have all seen him as cold - his own son thought him a monster - but he had seen first hand what happened to Gods when they no longer thought themselves accountable.

He had been there when they had fallen.

"You took your time," he remarked coldly without looking up from his list as the beast behind him snarled at the smell of the approaching Hound. Unlike the other Hunts this time it was just him and one another and their list only contained one, dangerous name. 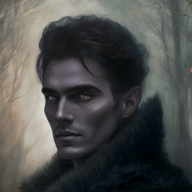 High Lord of the Winter Court

It was a rare privilege to be titled among the Erlking’s Sluagh -- to be distinguished with the honor of his King’s favor. Like his mother before him, he was proud of his distinction as Vaer, the Penance of the Wild Hunt.

It was an even rarer privilege to be summoned to their King’s office for a private Hunt. Titled for six out of his seven centuries, he had had this honor only a handful of times. Today he added another notch in that measure, another merit that defined his place in the nebulous power structure that was the Sluagh.

The merit wouldn’t be much if he was late, however. Midir had asked for him specifically, but that favor would no doubt trickle down to another if he did not deliver the excellence the King expected from titled Hounds. Stepping into the Erlking’s office, Vaer didn’t need to look at the mantle clock to know that he was precisely on time. Which, for Vaer, meant he was actually quite late. The black shuck smoothed a nonexistent crease in his outer coat before he bowed deeply.

“My apologies, Your Majesty.” No reason for his delayed arrival was offered. He didn’t grovel or make excuses; such behavior was not in his nature and quite beneath him. Today, especially, he did not wish to divulge. Vaer was a private person by nature, closely guarded against rumor and hearsay with a stiff, unrelenting stoicism. Matters inside of his household remained there, and he vetted any members of his staff whose tongues wagged too loosely outside of the estate’s high stone walls. Midir was, however, one of the very few people he was likely to confess his private affairs to if pressed. He lived by his moral set, and honesty with the King and Queen he served was high in that order of tenets.

Straightening, he stood at attention with his hands clasped behind his back and his eyes fixed on Midir. Instead of sitting and making unnecessary pleasantries, he got right to the business that brough him here.

“Have you details on our quarry?”
Reactions: Midir

Dark brows slowly pulled together and darkened chipped sapphire eyes which still intently studied the information in his hands. The only sound in the room was that of the clock marking the seconds which ticked by without an answer to Vaer's question. It was not a good sign of the Erlkings mood as probably already indicated by the acidity in his tone about the time. Of course it wasn't the black shuck that was the real reason for his ire.

"Annoyingly little," he reluctantly admitted and finally looked up at one of his most trusted dogs. It was one of the rare occasions the king actually looked troubled but instead of expanding on it himself he pushed himself off the desk he had been leaning against and held the single sheet of paper out towards Vaer instead. Whilst he read, Midir began to pace the width of the room.

Cairbre was a fae as old as the Erlking himself and had been his main competition for the title of King. At least, he would have been. In the months where Midir and Cairbre's power was growing to the point the rest of the court became aware a new change of power was on the cards, Cairbre had lost his mate. The male had been inconsolable and had vanished from the Court when whispers began that it was Cairbre himself who had killed her. For centuries there had been not a whisper of him.