Open Chronicles The Gem of the Sea 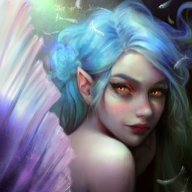 Hali didn't have a scratch on her, but she'd have preferred the wounds had been inflicted upon her, rather than him. Not to be a hero, but because she knew that the blame would no doubt be deflected onto her. To be fair she wasn't exactly the best influence and their friendship had been discouraged and at times when they were a little younger, absolutely prohibited (not that it made much difference).. But she was a palace orphan raised by the help, and he was the Prince. If there was someone to blame, it would be her.

She winced at Ana's question and chewed on her long, claw like fingernails as she bobbed frantically from side to side. Hanging around with blood in the water was never wise, they'd have to get his wounds patched up soon.

Petra had patched her up on more than a few occasions. She didn't stand for any shit, and she was Hali's sort of person. She was strange and intense, and her little cave was always brimming with weird and wonderful things that Hali could barely resist to study. She was barely inside more than a minute before her fingers were reaching toward an orb of mysteriously floating green light, drawn in by it's ominous beauty. Petra's boney hand curled over hers to pull it back slowly before she could touch it, and the tired glare that the woman gave her was enough to make Hali shrink back and drop her gaze like a child told off.

The sea witch gave her a look of mute warning and Hali gave her the sweetest smile, prompting an eye roll. It was clear this was not the first visit, nor the first time Petra had had to keep Hali's curiosity from getting her in trouble. She gave Ana a slow once over also, a slender brow quirking as though she could tell the siren was not from these waters, but the smell of the prince's blood drew her attention back to him, her lips parting to speak..

"Shadow eels.." Hali piped up as she twisted through the water up into a hammock that hung from the stalactites, and she reached to pluck a crystal from the rock when the woman's attention was elsewhere.

"Put it back, Hali..." Petra groaned as she gathered the tools she required to treat Tijan's wounds.
Reactions: Andromeda and Tijan 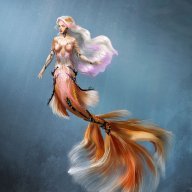 Ana, too, kept to the sunny waters as they swam further into the city. Every shadow had her imagining teeth and hurried her pace after the duo. Now the adrenaline was wearing off the Siren was questioning her choices in coming to this city and seeking out the darker parts first of all. She knew a part of it had been to find comfort in the establishments she knew but after such a close brush with death she was now berating her own stupidity. She should have been more cautious instead of jumping straight in. A sentiment that only grew as Ana saw with her own eyes what exactly Petra was.

It was hard not to keep the surprise from her face, coral eyes opening wide and her jaw falling open, but she managed to compose herself quickly and shot after Hali. Unlike her however she slunk into one of the small alcoves where a plush seat had been arranged and settled herself down there. Her wounds were somewhere between the other two with only one long nasty cut from her collarbone to her shoulder and it didn't appear to be very deep. She could wait.

Instead she turned her energies to taking in the vast cave of wonders she found herself in. Ana had never seen anything like it, not even when she had raided lost islands and followed tattered treasure maps across the seas with her father. If Petra didn't scare her so much she too would have probably been tempted to touch everything.