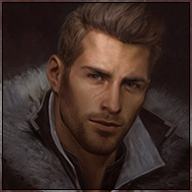 "Coin doesn't help half as much as you'd think." Val said bitterly.

He had tried that method when he was younger, just giving bags of gold and gems to those who had been stepped upon. More often than not that coin ended up either squandered or given to the tax man who just came back for more.

Lips thinned for a moment. "I help them however I can."

"Sometimes I turn trade their way. Other times I pay off deeds. Sometime I even..." Val trailed off and shook his head. "It doesn't matter. I do what I can."

When he could. "I don't get anything from it."

"Except the fact that I sleep better at night." Val could remember when he had the same discussion with Wren. When she'd held a knife to his throat and demanded to know what he really was. It was a strange sort of echo of that moment.
Reactions: Rania 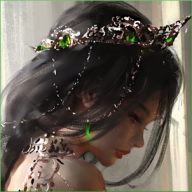 “Sometimes,” she spoke quietly, “coin is the only thing that can really make a difference in this world.” The thief had grown weary of this conversation already and this time around she did not turn to look at Valren. Rania hated to think that the quality of her life depended on materialistic things such as money, but at the same time she had long since accepted that truth.

Val, to her surprise, appeared to be as bitter about this as she was. She still didn’t look, but Rania could hear it in his voice. That strange sense of guilt that he was feeling was utterly foreign to her and when he snapped, the raven haired woman arched a brow and laughed. “So you’re telling me that you were born with the opportunity to care about nothing and no one in this world and you simply choose to do the opposite – because it lets you sleep better at night?" Rania shook her head.

At last, she gave her horse a little nudge and turned her head towards the stranger who had somehow become her travel companion. “I don’t know you very well yet, so it’s not for me to say what’s in your heart, but–” she paused for a moment and looked up at him. There wasn’t a hint of the natural sneer her voice usually carried and when the forest around them had quieted down, she chose to be genuine with him.

“I cannot, for the life of me, believe that someone born into your circumstances – with your status and your wealth – developed a conscience in spite of the small, privileged world you were raised in.”

Not a hint of a grudge in her voice, the thief continued on.

“You aren’t gaining anything from this, but at the same time you’re not really doing it for anyone but yourself. A clean conscience, that is your reward.” She laughed again, and brushed a strand of black hair out of her face.

Val shrugged his shoulders. "You can believe what you like."

He had learned that arguing these things was rather pointless. She was probably right in some ways. The system wasn't going to be torn down and misery and cruelty would continue on no matter what he did or how much he tried to change things.

Those facts didn't stop him though.

"I do what I do because it's right." He said simply. "I take from the rich, and give to the poor."

"I can't change the world, but I can change a few lives." No matter what she believed. Val had changed people's own worlds. Villagers who had nearly been forced from their homes. Men who'd had their lives stolen away. Women who had nearly seen their families broken up.

That was the change he could make happen.

"It's more than anyone else is doing." He pointed out as he kept riding.
Reactions: Rania

“I suppose that’s right,” she said. He was doing more than most, herself included. Rania wasn’t a saint and had struggled to keep her head above water for most of her life – she didn’t have the energy to worry about others. Her family was gone. Valren, on the other hand, was trying to unmake what was left of his, if that could even be called a family anymore.

“Most men are easy to kill once they are vulnerable,” she said to the young lord and looked straight ahead. Rania had given this some thought earlier, but if he wanted to go through with it then perhaps the thief could be of assistance. “Does your father take courtesans?” From where Rania was from, that was the easiest way to get anything you wanted: information, money and sometimes even a hit.

Rania turned her head towards him and tilted her head. “Either way, if there’s anything else to know about your dysfunctional family: now would probably be a good time to tell me.”

The perspective of heading to a kingdom as wealthy and noble as Oban only to plot the death of one of their highest ranking officials was oddly exciting to the young woman and while Rania was all but reckless, her life had been rather dry in the past few years. Maybe this was a good thing and more good things would come from it.

“I mean, you can’t possibly wait with it until he’s dead, if he’s really that bad. He’ll only cause more trouble for you, have more assassins coming after you. Hell, you might even end up dead before he does. By the way, I’m also in the market as a full time bodyguard.”

Her voice carried a playful note, but she was being half serious. Her seismic sense made her a formidable danger detector, but of course Val didn't know that. Yet.
Reactions: Val

"He does not." Val could have said many things about his father, most not kind.

Yet a quality he had always carried was loyalty. The man had never once betrayed his wife, had never once thought of turning against the King. His father was a man of principle, cruel as they were. He stuck to them like a clock stuck to time.

It was something of an annoyance for Val. Not that he would ever admit as much to Rania. A breath filled his lungs, and he drew himself up in the saddle.

"I might." He admitted. "But I don't think dear old dad wants me killed."

No, not his only heir. "I'll see him ended, whether by your hand or mine."

Val said as their trek continued.

He couldn't have said how long it took for them to reach Oban. Whether it was half a day or full, but as the sun was setting the great city came into view. It's white walls and beautiful gates stood out, a stream of men and women moving in and out as Rania and Val approached.
Reactions: Rania

“Is that so,” said Rania and continued on. Out of the many men Rania had met and been with through her life, those who chose not to betray their wives did so out of love. Val had made it seem as though his father wasn’t capable of such emotion, but perhaps there was more to the story after all. Two sides, only one of which she had heard.

“I wonder why people care so much about what happens after they die.” It made zero sense to her, but then again: she did not have a family anymore. He did. “Unless he loves you and that’s why he doesn’t want you hurt,” the raven haired added carefully and peeked up to see his reaction.

They arrived in Oban shortly after.

The city was as large and imposing as she remembered it and Rania was certain that she would have gathered a lot more looks for being an outlander – if it weren’t for Lord Valren and the corpse he was carrying with him. John had begun leaking from his bag, much to her horror, and she really wasn’t looking forward to seeing the faces of his family once they were presented with what was left of him.

Rania had thought about taking on a fake persona for the time being, but realized quickly that she was a no one anyways and thus it wouldn’t have mattered.
Reactions: Val

This was his city.

Oban had always been a maze to foreigners, but that was mostly because of the way the place had grown. There was no real planning to anything, no outlay that would help someone who didn't know navigate the area here.

There were cities in the world which were organized, which had rebuilt, but Oban was not one of them. This city was a beautiful maze of wondrous architecture and winding streets. "That's the King's palace."

Val pointed out the massive citadel, it's architecture undeniable beautiful. Great statues and domes decorated it, spires of towers and a low wall that stopped just anyone from coming in.

Not long after that they approached another estate, this one with a higher wall and a huge Gate simply marked with ornate flowers and a single lion in the center.

"And there's home." Val mused as they approached.
Reactions: Rania

Oddly enough, Rania noticed a change in Valren’s demeanor the moment they passed the gates of Oban. He was happy to be back home, she realized – or at the very least relieved. The city itself was massive, confusingly structured and quite imposing. A place one could easily get lost in, and while that much was helpful on the run, the thief didn’t like not knowing where she was.

The woman sucked in a sharp breath and nervously tugged on her long ponytail.

Suddenly no longer so sure of herself, she made sure to stick to Val who was leading the way and once he gave her a few introductions of the most important places, the thief scoffed and stiffled a laugh.

“Forget what I said earlier,” she spoke and shook her head in disbelief. “I’m in the market for marriage as well,” Rania joked half-heartedly. If that was the reward, she would most certainly consider marrying for money and at once the girl understood why the nobles did it.

They approached the gate and her emerald eyes narrowed when they noticed the animal adorning it. She hadn’t thought of it that way until now, but Rania soon realized that she was, quite literally, heading into the lion’s den.
You must log in or register to reply here.
Share:
Facebook Twitter Reddit Pinterest Tumblr WhatsApp Email Share Link
Top Bottom