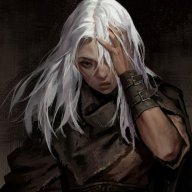 The wind howled today, blowing out of the north with Ty'rath's fury, unchecked by much more than low rolling hills for miles upon miles. The grass rolled like waves on an ocean, tan and grey as though the sea were simply filled with mud and whipped to a grey froth by the ceaseless tide. Autumn had come to the plains; in this part of the Savannah, whose boundless scope was difficult to comprehend, the cold wind from the north would eventually bring snow and ice.

But that was months away, yet. For now, it merely turned the dry heat of summer down to a tolerable level for those who were not native to the grass. For those that were, it was but another part of the cycle of the Seven, the great turning of the eye of Tiam.

How long had it been since she had been home? The days had stretched to weeks, and then to months. Since her capture by the Vel Aniri and subsequent escape, she had tracked across the trackless land, pursued by bounty hunters that would seek the coin on her head offered by the Anirian army and, in a few notable cases, the families of the noble officers she had slain. Neither of these facts made much difference to Aeyliea Tie'lan, she of the Keil'tin No'rei. She was descended from Tiam, like all of her people, and possessed by the same fierce thirst for vengeance for the Sundering that had happened so long ago as to be incomprehensible. Her soul had shone bright through all the ages, the soul of a heroine out of legend. Countless times had it been thrust into the Sea of Souls, and then drawn back into the world to continue weaving its tale.

She could not remember those past lives. Very few among her kindred could remember the lives that had come before them, and those few who could often did not speak much of it.

Her people dwelt far to the north and west from Vel Anir. She had journeyed for a month, but without a horse and only a spear that she'd been forced to remake, she had not gone far. It had been necessary to slip past the nomadic camps of others of her people; the wars among themselves were often bloody and brutal, and being caught would not be ideal. The only enemy the No'rei recognized as a greater threat than one another were the encroaching people from outside, the Kin-slayers.

The people of the cities. People like the ones she looked upon now.

She did not know if they were hunters - either after the game that wandered the open spaces, or for people like her, whose head would fetch a good price, even better than the standard reward for bringing in any of her ilk - or if they were simply traders making an ill-advised trip across the grasslands without a proper escort. Aeyliea had been forced to subsist off of grubs and coyote for a month, and anything else that she could get close enough to skewer. Three months after her recovering, the twisted limb that was her left arm could still not hold a bow to draw it. The pain had subsided, but there was still no strength in it. Only the constitution of her people had saved her from a lingering death - that, and unexpected help from a stranger. It was a miracle that she had not had to have the limb cut away.

Blessings of the Seven be upon her that she had lived. And, for the unfortunate souls that sat in their camp, basking in the late afternoon light while the wind ripped at their wagon, she hoped the Seven would see to blinding their eyes and making the harvest of their goods as painless as possible. 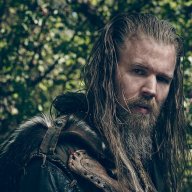 Arc got off his horse. “Good girl,” he told the brown, spotted mare in his deep voice. He tied her to a tree, she had enough room to walk around as much as she needed. He put one hand on the brown leather sheath of his dagger, just in case he needed it, and looked around the camp. He didn’t see who he was looking for. “Have you seen anyone who looks like a panther, but human?” He asked someone.
Reactions: Aeyliea

"Do not believe that I have," a young woman replied to the dwarf. She wore a simple chain hauberk that fit loose enough not to pinch, and held a spear idly in one hand. "Pretty sure we'd know something like that if we saw it. Probably wouldn't be a bad addition to the team," she remarked.

Their benefactor sat in the wagon with a book open, pouring over its pages to the exclusion of the world around him. A scrawny fellow with a whispy beard that made him look younger than he probably was, he kept looking up to squint into the middle distance, out across the rolling plains. After a few moments, he would scribble something on a tome lying on the seat next to himself, mutter some incoherent nonsense, and then go back to poring over the book.

The mercenary that Arc had spoken to shook her head. "Dangerous to have your head in the clouds out here. Lots of things don't like us very much - beasts of the plains, the vengeful spirits of the dead. Oh, and the savages of course," she remarked to him.