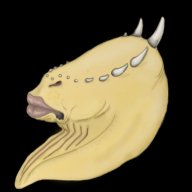 Vel Amir was known as the city of humans. Shisha didn’t mind the place. It had its peculiarities like everything else, but it was a good place to look for steady work. Shisha was trying to make herself known as a bodyguard and mercenary, and now she finally had the armor that made her look the part. She had a helm over her strangely elongated head, accordioned steel over her ribs and muscular neck, and a padded piece along her spine to protect it. Even the chainmail along her pouch and stomach was surprisingly comfortable.

At the moment she was putting up her advertisements. She’d taken all night to write them, and had a small stack in her pouch. She pressed the paper to the notice board with her paw, and affixed it with a nail pressed in with her nose.

It was short and sweet, and would hopefully grab someone’s attention. She moved on to the next notice board, a few blocks down the street, to see if anyone had replied. Instead she saw her notice on the ground, torn down. She bared her teeth a bit and looked at the piece of paper. Who had the balls to..? She eyed where her paper had been.

Another mercenary’s notice was in its place. She lifted her head and tore it down, then ripped it up with her paws. She wouldn’t be bullied out of this place! Two leggeds were good at that sort of thing. Well, two could play at that game. She plastered her notices all over the board, and gave it a curt nod.