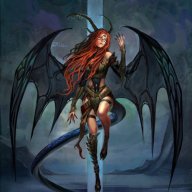 Damned slavers, she had been a slave for two years before her escape, after which she devoted her life to the service of the demon lord Cinder. She had now been a disciple for almost three years now, and her skill in the infernal magic and the use of the objects they could conjure. Her disciple superior Rathu Belzad was at this point on the third or fourth infernal book, much further along than she, who was only on the second of seven. Despite this, her skill was well developed, and she had already begun undergoing the seven stages of transition from human to demon, the first made her impervious to fire and very tolerant to pain, the second gave her wings, which let her fly at respectable speeds, and these were hidden under her cloak.

But they had been seen by someone, and news of a winged woman reached the ears of a local slaving camp, where they kept slaves before auctioning them off. And they offered their people a reward for her capture. So now she was fighting them off, and while she put up a fight, they were simply too numerous. She fled, her wings beating hard as she fled to the road, the slavers close behind her.

When she got there she summoned her sword and turned to fight again in the open, unaware of the people coming down the road.
Reactions: Hahnah 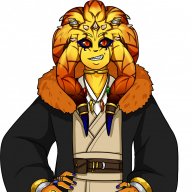 It was the usual day of travelling down the road for Alden and Hahnah on the journey to Tolelajara, home of tieflings. Alden had begun to teach Hahnah many things since they met. How to set up a camp, how to cook, ho0w to hunt with a bow. All the essentials to surviving in the world, he was showing her the basics. When they got to Tolelajara, he would buy her some weapons, and she would learn the way of the blade. They;d be wandering along the road when suddenly, Alden's hand reaches out to stop Hahnah from walking, he himself having stopped as well. "Let's hold on a minute....aye? Seems we have a conundrum. Perfect time for practice, actually." He hands her his longbow, and then an arrow. Though before handing her the arrow, he cuts his palm with it, soaking it with his blood. "That lass there, seems she needs some help. Those brigands over there...leavin the woods. I recognize their colors. Slavers. Ran into a few of their guildsmen on the sea. I need you to fire at the one leadin the group up front, best you can."

He helps adjust her shoulder and stance to the right position so she can fire the bow. "Remember, inhale....it'll steady your aim. Then...exhale when you fire. You can do it." He playfully ruffles Hahnah's hair. If Hahnah's arrow hits, Alden would snap, and the group of slavers would soon be very confused and disoriented as one of their men suddenly explodes in a bomb of pure kinetic force that would send those nearby off of their feet. Typical Alden fear tactics. 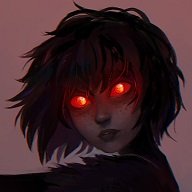 Yet as Alden taught her during their travel through--and eventually from--Falwood, Hahnah felt the warm touch of kindness and caring that had departed along with Kylindrielle and Elurdrith. She had often slept exposed through biting wind and pouring rain as animals and monsters did, but now she had felt the comfort of a pitched tent and a soft bedroll. She had eaten her meat raw, tearing flesh and muscle from the bones of a fresh or scavenged kill, but now she had again become acquainted with the taste of that which was cooked and seasoned. She had at her disposal mostly her Cascade sorcery for hunting, a skill which was effective only in the right circumstance, but now she had the option of a bow when her eyes could not meet those of her prey.

There was a thought she pondered. Would she regress back to a more uncivilized way of being, should she and Alden become separated? She had begun life in such a primeval state. She had returned to it once her caretakers were gone.

She did not know.

(do you pretend to be that which you are not?)

She did not know.


* * * * *​
Alden stopped her with an extended hand. She looked up at him, curious and expectant. And he made mention of that lass there. Hahnah saw her then (she had wings? like a bird?), and likewise saw the men whom Alden called brigands and slavers, all running down the road. Hahnah could not at this distant tell if they were human or not, but it seemed to her that these were things that humans in their profane lives indulged in.

She took the longbow--somewhat surprised that it was offered to her. She had been prepared to engage in her usual tactics: concealing herself from sight, and flinging Knives and Orbs of Elemental Hatred from angles unseen. But when Alden cut himself and painted the arrowhead with his blood, she caught on to what he was doing.

Hahnah allowed herself to be adjusted properly into the best stance to hold the bow and loose the arrow accurately. Her Living Armor, the communal organism of strands which lived in symbiosis upon her body and was akin in appearance to fur, had grown accustomed to Alden's touch. It did not respond in a protective manner as it would otherwise.

"I will inhale. I will exhale."

And she did. The bow drawn back and her eye taking aim down the shaft of the arrow and at her target, the lead man in the group. In. She released the bowstring and let the arrow fly. Out.

Her arrow was loosed. Uncharacteristically with aim that was true. A success that had come atop a pyramid of past failures and attempts. And the arrow flew and arced and sailed down toward the lead slaver chasing Iris.

An arrow, it whizzed past her, not close enough to scare her, but definitely close enough to make her wonder who the target was, until it hit the lead slaver dead in the chest. She didn’t wait to see the result, her wings opened and she soared backwards, towards the shooter while keeping herself faced towards the slavers. She opened her hand as she flew and a ball of angry, orange-red fire materialized before being launched at her persuers. The sphere of fire struck one, who immediately blazed into a pile of ash and scorched bones, he didn’t even have time to scream.

She caught sight of the shooter and her companion. A humanoid, furry thing that looked almost like a monkey in that she had fur all over, and she may well be descended directly from one. The other was tiefling, white of hair yet young looking, he seemed to direct the creature in her shots, a teacher? A creator? It didn’t matter right then, they were helping her, and she was grateful for it, this being one of the few times that she might actually grow to trust someone before the two month mark.

She landed a short ways in front of and to the side of the pair and another fireball materialized to strike another slaver, three down, seventeen to go.
Reactions: Hahnah 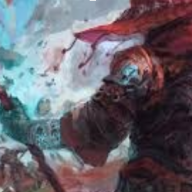 Heavy and Hauled.​
Farzad was a slim man. And emphasis on the was. His vision was blinded by a long stretch of fabric encrusted and bejeweled with tiny rocks. His figure was more like a cripple in a chair carried by tons of steel and weights that kept his figure immobile. He was like some facsimile of a mocking god and through tiny whispers on the wind he could hear their voices. The Slavers. His captors. He counted it on invisible and numbed fingers. 137. He repeated the number in his mind. This was the one hundredth, and thirty seventh time he had been captured.

If we do it right, we can make him our weapon...​
Fetch a mighty price he would...
​
They were the thirty-eighth to imprison him because he was a wizard. Only the fifteenth to not realize he wasn't a true wizard. But he had to give credit they were the fourth to use rocks to bind his non-existent magic. At least, not in their sense. Magic radiated, but no longer from him. If they could feel it's subtle pullings, it's nascent strings they may have realized he could only perform through scripture. And those scriptures they had gathered into his oversized backpack they couldn't quite figure out how to undo.

But he'd be lying if he didn't have some backup. Ink lathered into his skin could do wonder's. Nothing fantastical but maybe enough to break him out. Ashame than that the damn rocks kept his body nice and confined. So far the Slaver's had pulled something off right. It was a few moments later that he felt it. The beasts of labour started moving his form again, his towering t shaped form. Time felt like an eternity and his body found itself mute to most if not all. Sensation was lost. Magic was an empty cord. His connection to the world was as tethered as a Bowline. Strong and sturdy, but he felt that he could be untied and lost to the void that filled his mind with but a pull.
Reactions: Iris and Hahnah
You must log in or register to reply here.
Share:
Facebook Twitter Reddit Pinterest Tumblr WhatsApp Email Share Link
Top Bottom