The Kivren are a group of isolated amphibious beings, a hybrid of half human and half fish species endemic to the archipelago of Kiva.

They are an aquatic species, living the bulk of their lives under the ocean and within the vast grottos and sinkholes along the atolls, islets, seamounts, and reefs.

Predatory by nature, they rarely interact with other species and when they do, most interactions end violently. They use primitive technology, most of it depending on what they can gather naturally from the reefs around their archipelago, such as sharp coral, ivory tusks of narwhals, or other such primitive weaponry.

The majority of Arethil knows little of the Kivren, but folklore has a way of passing around from sailors from port to port. They tell of beguiling creatures who lure sailors to their death, depicting the Kivren as perilous creatures as the goddess Kiva herself, associated with floods, storms, shipwrecks, and drowning. In essence, the Kivren are at the root for Arethil's folklore of the Sirens.

The Kivren, or Kiva, do not have a specific language. Instead, they communicate much like whales and dolphins do, with distinct clicks, whistles, pulsed calls, and, as a defensive and predatory mechanism, bewitching songs. Their siren song can beguile prey or predators for a short time but may invoke a persistent desire to hear it again. It could potentially drive a person to madness.

They are a rather primitive species, using distinct somatic and kinetic methods of communication akin to large packs or pods of animals.

It is possible for Kivren to learn the common tongue, although this might take some time, as Kivren tend to be suspicious of other species. 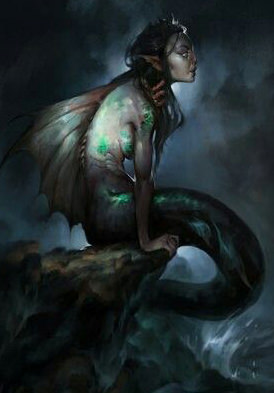 The Kivren have a variety of features akin to typical sea life with distinct differences. In their base form, the Kivren, or Kiva, are humanoid in shape with a head, two arms with long webbed fingers and extended sharp claws, and silvery grey scales. However, the lower half of their bodies are akin to that of a fish. They have a dorsal fin that protrudes sharply from their back and is made out of flexible cartilage and a thin webbing of flesh, allowing it to be easily retracted and flexed for fast swimming.

They have gill slits along their dorsal rib cage for breathing underwater, allowing them to take oxygen from the ocean as they swim. They have other pelvic fins along the length of their tail, which contains powerful thick muscles used to propel them forward and for sharp turns. They have a powerful tail fluke and a barbed stinger with a sharp piercing point. Their bodies are adapted to high pressure and cold temperatures of the deep ocean.

A variety of them may have a variety of pelvic fins of differing lengths, they may have hair like extensions on their head or a crown of fins instead. Rare subspecies have eight tentacles much like an octopus instead of a tail. Under the light of the moon, their scales can give off a radiant appearance highlighted with natural bioluminescence. 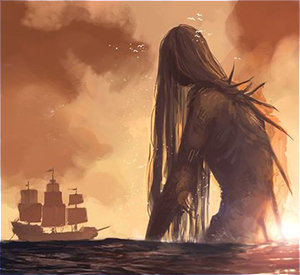 [3]Kiva appears to be a series of scattered volcanic island arcs generated by subduction zones and hotspots. These are widely separated from the mainland through several weeks journey. It has numerous islets, seamounts, and atolls but for the most part, spent the majority of their time within the protected barriers of numerous reefs at the grotto.

They contain an extensive stretch of reef barriers that could ground any ships that came too close. These reefs contain a rich and varied amount of sea life home to many endemic species.

The climate is tropical but experiences many different climates depending on altitude and weather. However, the constant tropical storms, occasional hurricanes, and the folklore of danger have a way of keeping the majority of Kiva's islands unexplored.

The archipelago of Kiva has yet to be fully understood. It remains a mysterious small stretch of isolated islands, the bulk of which have yet to be explored. The ages have seen a collection of notes and bits and pieces of drawn islets from sailors who managed to chart what they could from a safe distance.

Where the name Kiva came from for the archipelago is hard to say. The name had been found scrawled on ancient maps and seen with more frequency as the years passed.

Some claim it was named thusly so due to the Akiwa Sea, others state that Kiwa is actually the name of the goddess the sea, and the curving archipelago is the remains of Kiva herself.

Kivren are natural predators, with dagger-like teeth, sharp talons, were powerful swimmers and possessed superhuman strength. They were strong enough to break through solid wood with their bare hands. They are carnivorous by nature and are prone to hunting in pairs or larger groups. They spend the bulk of their lives among the depths of the ocean and grottos throughout the Kiva archipelago. Here they hunt, breed, and maintain their community.

They are generally xenophobic and tend to see any other creatures as prey or predators. This is where one of their more unique characteristics is utilized. While the majority of their communication is somatic, they are able to sing with enthralling quality to either beguile predators or prey. This 'Siren' song is a defense mechanism to lure anyone who hears it towards the singer, temporarily creating an obsessive, paralyzing fascination in the listener. 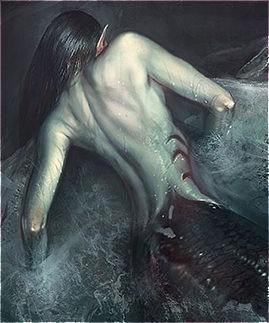 Yet their most distinguishing feature is that by all accounts, the Kivren are changelings. While rare, Kivren are aware that as a Child of Kiva, they retain a portion of the traits given to them by Kiva, the Goddess of the Primordial Ocean. Much like Kiva, they are able to shift their form when they are completely out of the ocean. While a painful metamorphosis, it allows a Kivren to temporarily and with shed their desiccating fins and walk on land.

In this state, they appear human, but still may be perceived to be more animal than human. Kivren are able to violently change back to their aquatic form by returning to the ocean or if they are saturated with saline water. Freshwater doesn't seem to prompt the change, but when activated, the Kivren is prone to lashing out violently out of the sheer temporary agony of the change.

Kivren who are not well adapted to being out of the water for long periods of time will find that their skin will dry out, resulting in sore, irritated areas of cracking flesh. Breathing may become difficult, and in an arid and hot climate, they may quickly weaken and potentially die of dehydration. They are able to spend more time on the surface each time they transform to occupy land.

As they are mortal creatures, they can be killed by conventional means. 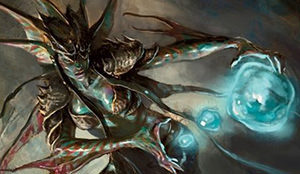 A few Kivren have shown to be touched by Kiva, Goddess of the Primordial Ocean, and are able to manipulate the environment around them. These individuals show an affinity with sea creatures and water, allowing them to be more in tune with their aquatic environment.

Most use their abilities to protect their pods from danger, as the defense of the pod is paramount. 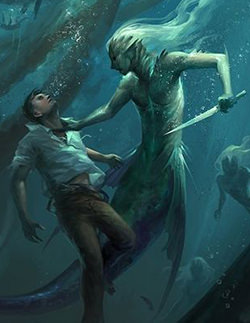 [6] The Kivren is said to be the descendants of Kiva, the Goddess of the Primordial Ocean, created in her image from flesh and volcanic stone. The entire archipelago of Kiva is, in fact, the Goddess herself, ever slumbering as the ages have weathered her down into the scattered islets, atolls, ocean sinkholes, and islands known today.
They are a matriarchal society, living in social pods and generally keeping to themselves in the depths of several grottos and underwater oceanic sinkholes.

There is very little knowledge of the Kivren and their culture in Arethil, and their distant isolation far in the Asherah Ocean only allows this to continue. Most interactions tend to turn violent, as Kivren are apt to perceive anyone other than another Kivren as a predator or prey. Fight or flight take place, with either the beguiling song leading the opponent to their death or left with an obsessive, paralyzing fascination in the listener. 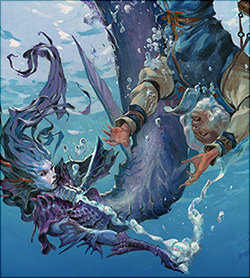 They say that it starts with the green lightning far into the horizon. Flashes of emerald fire that can entrance a curious sailor, driving curiosity to stare into that distant line for a chance to catch that flash once more. The mist grows thick, but if you squint enough, you can catch the crawly line of those distant isles. Land be there.

That's when they say you need to stuff your ears with wax. You need to do it quickly before it is too late, for that keening song be sure to follow soon enough.

Many a ship have not taken this advice, sought riches or let their curiosity drive them to sail too close to Kiva. Yet the invitation she beckons you with is just a guise; for you're the flesh and bone that she needs to feed her power. You'll see them, moving through the water, dark shapes ready to lash out. Tendrils of kelp ready to reach right out for you.

Don't let your eyes or ears fool you, lest you find yourself slumbering forever within Kiva's womb.