Open Chronicles The path to the Light 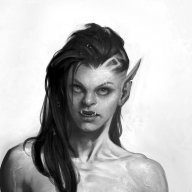 Deep within the Felwood Aeri followed the hoof prints in front of her. Each step carefully placed to avoid upsetting the debree on the forest floor. The shafts of light penetrating from the branches above reminded her of commitment to the light. To the spirits of those she carried with her. How grateful she was for their guidance. They kept her safe and they kept her true. Today they had whispered to her that of she could find the right creature then transporting all the vessels would be easier. The vessels she carried longed for more company. She could feel the pain of their hollow sadness. Carrying more of them would be difficult without help.

The feeling in her gut would not subside. Something bigger then her life this far was just around the corner. This bubbling and growing sensation of anxiety mixed with apprehension. The rattling of her spirits only confirmed this feeling further. With each step and each rattling of the bones the whispers reminded her of her duty. She was bound to their desire and their need.


The hoof prints were fresh and she could now start to smell the beast. She took a deep breath and urged her breathren to be still. They were not far now. Her tangled mane of silver stuck to her face with the humidity of the forest. It had been a difficult path to follow this creature but soon she would lay eyes on the one she was destined to find.


There he was in all his mystery and grace. Silken black velvet coat. Muscular and strong. He could carry thr vessels and herself with ease. She stood silently observing him. He had yet to notice her presence. He was alone without a herd. It would take time and patient to capture his trust and his soul to her endeavour.
Reactions: Maridis Va Dori 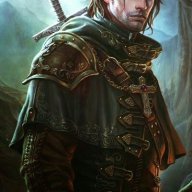 Maridis was walking through the forest when he spotted a young women sneaking up on a grey horse, he saw her talking with a skull earlier and Maridis wanted to see what she would do. He snuck up closer behind her and whispered.

"So, you plan on taking him for yourself or sell him?"

He wasn't planning on stopping her, he was actually headed to Fal'Addas but he had time to see what she was going to do, he stood a few feet behind her and waited for her reply.

The new unexpected voice startled her as she heard it. But the new voice had a different direction, it didn't speak in her mind in the same way as her kindred. She wrinkled her nose, there was also a new smell. She kept her eyes on the stallion but spoke in return to the new voice. "He will carry. Strong. No sell." she said simply, crouching lower and moving closer to the targeted beast.

The creature itself was picking at blades of grass with its teeth. Occasionally stopping to gaze around and check for predators as all herd creatures do. Normally there was more then one animal and they could take turns watching. She nickered to him softly, watching his ears prick in response and shift. He was listening. Lifting his hoof and snorting, shifting his feet in an uncertain manner. She made the soft noise to him again staying still. The beast shook his head in response and moved closer, curious about the girl who made horse noises. She whispered softly "yes, soon, soon. Patient. No rush". Her fingers brushing the tops of the skulls around her waist. The kindred were becoming inpatient in their drive for change; for whatever it was they had in store for her.

"You walk? You looking for beast?" she asked the stranger, whilst continuing to watch the beast watching her.

Maridis watched in awe as she conversed with the horse in it's language. He turned and stared at her.

Maridis whispered as he stared at her and then glanced at the skull she held in her hand, he wondered if it was worth anything, he doubted it, he doubted anything this strange girl owned was worth much. He walked closer to her and whispered.

"What's that thing you're carrying? Why do you carry it?"

He decided if it was worth something he would take it from her, no question. It's not like she could stop him.

"Ask you the same. I am Aeri, priest of the Light" she said nonchalantly. She turned to face him now that he questioned her about the kindred."Family, my guidance. My protector. This is the path of the light. We never walk alone" her fingernails gently scratching the surface of the skull.

She lifted the skull and squinted looking into its empty sockets. "They say you are suspicious. What do you want with us?" she sighed softly. Murmuring something unintelligibly to the skulls. She nickered again to the horse, and clicked her tongue. Again his ears flicked in response and he loped closer still. The same nervous dance of curiosity mixed with fear. The beasts eyes looking to the man and back to the orc.

she had never conversed with such a man before. All the questions and sneaking behind her. Her bones did not rest easy in his presence.

"I'm Maridis Va Dori, so, that skull gets passed down the generations? Hmm."

He pauses and thinks to himself who he knows that might want to buy something like that. He can think of a few people who have worked for before, but he needs more details.

"So, where are you from? Does everyone carries skulls like you in your home?" He slowly walks closer so that he is standing beside her, he stares at the horse and sighs, knowing that this might take a while, based on her short replies to his questions.

"I am the only priest." She sighed softly, "there were once more in the stars, now it is my burden. We all came from above, born to this world" She looked over him again once more and wondered if he had been following her. "They dont talk to anyone else. Never loud enough for anyone else to hear" She added briefly before edging closer to the horse, nickering softly and extending her hand to softly brush his face. The horse snorted but stood still eyeing her back. "Ah you are not scared" she whispered softly to the horse.

She closed the small distance between herself and the horse and ran her hands over his body. He was starting to trust but it would take longer still to mount him. She turned her back to the beast and watched the man. The horse hang his head over her shoulder. It felt like they were already bonding.

Maridis stares at her and sighs. "So, why do you need a horse? You planning on travelling?"

Maridis asks as he pulls a small apple out of his pocket, he walks over to the horse and allows him to chomp on it, Maridis uses his free hand to pet it "Good boy, shhhh, good." He whispers too it. "My father owned a couple horses, beautiful beasts, I loved riding them as a child. So gentle but firm."

Maridis continues to pet it as it finishes off the apple. "This is almost fun. If it weren't for your complete lack of conversational skills, well minus with that" Maridis nods at the skull. "God I hate this place." He whisperers quietly, mainly to himself.

"The weight of all the constant talk is heavy. They desire more." She said with a soft smile watching his kind interaction with her new beast. Horses had such a peculiar way of eating, their lips seemingly grasping at food before teeth shredding chunks.

"Much of life needs gentle firm" she added simply thinking about the balances of survival and life in general. She smirks at his motion to her burden. "You have no need to fear them." She said softly. "As for conversation..strange experience for me."

She looked at him more directly and asked "Why are you in forest?"

Maridis smiles and nods. "I fear what I don't understand, which is why I try and learn as much as possible, what I know can only help me."

Maridis turns and faces her, he pats a the breast of his jacket. "I'm a treasure hunter, I was out here working on a contract, and I ran into you, so I just thought I'd see what you were up too."

Maridis sighs "Unfortunately the treasure I was out here for is gone, the client is not going to be very happy, he wanted it very bad."

She smiled "treasure". The bones on her waist jangled. "Oh you think he might like the fire rock? Are you sure? Ok." Her fingers slipping down the inside of her strapped breasts and pulled out a small stone with a shiny surface.

"The spirits want you to have fire stone. Mountain of fire spits into cold river with sand. Smooth stone with fire inside." She offered the stone to him with her hands, it was still warm from bring pressed against her. It was a dark smooth stone with a deep red fire opal exposed by years of wear. Swirling depths of blue and red complimented the deep dark stone.Treasure from the earth that she had carried for a long time. The spirits wanted him to have the stone. She knew not why.

"What was the treasure meant to be?" She asked curiously.

Maridis grabbed the stone and examined it, he held it up in the air and glanced at it. "It's amazing, thank you, I might not even sell it. No, that's a lie, if it's worth much, I'll sell it. And the treasure was supposed to be some fucking goblet thing, for some elf guy who thought it would restore his youth or something. I couldn't find it and now he'll be pissed." Maridis sighed and thought about that conversation he'd have to have. There would be yelling, that elf guy Evenar or Evenor or Eve something, was a yeller, Maridis could tell, he had almost worked himself to death as he thought of the possibility Maridis failed. No wonder he needed some way to recapture his youth.

(Sorry, I didn't get a notification for some reason

She smiled at his excitement and happiness with the stone. The kindred had been wise to guide her to take the stone in the first place and now to give a benefit to this man. "Destined that you are to sell it? Not sure if worth. But would look appropriate on a string."

"Survival is survival. Death is death and that should not change." Anything involving changing the lifespan made her shiver. It felt forbidden in itself. The bones would stir and push to some long forgotten warning in the back of her brain.

She continued to stroke the horse gently, holding the skull in her hand near his face. He was a smart beast and his ears flicked nervously. She nickered to him softly and shifting his stance he started to relax more.

"Seems like an foolish errand" she added thinking how silly it would seem to search for a cup that restores youth.

Maridis snorts "I told him that, I said if I did find it, it probably wouldn't work. I also told him the information was so outdated that there wasn't a chance it'd still be where he said it was. He just cursed and yelled at me, so I said I'd do it, with half the pay upfront, so I still made something." Maridis sighs and stares at the stone. "Maybe I will keep this, just for good luck. Where did you even get it? Also where are you from?"
You must log in or register to reply here.
Share:
Facebook Twitter Reddit Pinterest Tumblr WhatsApp Email Link
Top Bottom