The Great Ones No longer a slave... 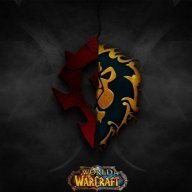 (Open to all. Development thread we're taking a trip to a Blue Orc village and gonna go through a bunch of stuff hopefully this makes intent of thread pretty clear. But yeah we're going to explore a lot of blue orc history and the like. Thanks in advance.)

He awoke that day.

He was in a state of half-sleep half-being awake. He never experienced true sleep anyway. The gods saw fit to deny him that. After he'd received his recent injury he was down one eye. As he stood up from his position against the wall of the cavernous stretch, he stretched and walked outside of the mine shaft. It was difficult to explain how he felt. I am free...we are free...but what is freedom really? The masters forced our hand that day...we had no choice but to fight back and we all paid a heavy price. He was outside getting some fresh air. The guards who normally worked shift in the mine are were present, but they all acknowledged the miners were free and virtually left them alone.

The guards from the nearby Cerak At'Thul accepted the former slave's freedom at that point.

Months had gone by since that day. There was word that great unrest in supernatural entities and other magic beings were resurfacing that really should not have been. Something was going on that Nosdyn could not explain...but it also mattered very little to the miner.

Until something occurred that directly involved him, he was a miner through and through.

He looked at one of the nearby guards and nodded with a mutual respect towards him. Those soldiers were paid to do a service, they were just doing their duty and that was something Nosdyn could relate to. He walked over towards the guard. "I got treatment for my injury." Nosdyn said to the man.

The guard nodded. "You have to wear that patch for the rest of your days probably, it's likely not all that bad."

"Did you get the letter yet?" Nosdyn asked.

"It arrived a few days ago yes. I was meaning to hand it over to you in person. Can I ask you something?" The guard asked. The guard handed Nosdyn the parchment.

"Why now?" The guard asked. "You've lived here most of your life...why leave now?"

He paused for a moment. "I need answers." Nosdyn explained. "I was robbed my people's culture and my own past." Nosdyn rubbed his chin, it was difficult to explain what motivated his recent decision. "I won't be alone." Nosdyn promised the guard.

The guard thought about what he was hearing. "The girl you saved. Definitely good company right there. Do you have a date for the trip set yet?"

"We leave a few days from now. I already purchased the tickets and made arrangements."

"I have been aware of that for some time. I was exiled for a reason. Maybe that's the whole point of it all. I am just after my own answers, so I can make peace with my past." Nosdyn said.

The guard nodded, understanding the reasoning behind that. "You're a good Orc, Nosdyn. I hope you find the answers you seek. I wish you a good journey in all this."
Last edited: Jul 25, 2020
You must log in or register to reply here.
Share:
Facebook Twitter Reddit Pinterest Tumblr WhatsApp Email Link
Top Bottom