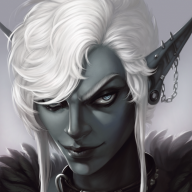 It was called Sanctuary and, in a way, it was. Undead and their allies came from all over to trade, survive, thrive, and otherwise live their lives, or rather afterlives. She'd chartered a fast vessel to sail her to the Eretejva tundra with no questions asked and while it had cost a pretty penny, they'd been delivered with no issue and easily outrun the one or two pirate vessels that had been spotted en route.

Vic'ynrae adjusted the pack she carried as she stepped onto the docks. Despite standing out like a sore thumb, she'd opted for no disguise for the trip. In a place where the undead reigned and the living generally shunned for various reasons, simply being alive would mark her from the crowd. Being a Drow and a mage was simply an afterthought. With stealth abandoned, she'd dressed rather conservatively compared to her usual tastes. Leather breeches and a brocade vest of muted colors were worn beneath a black velvet greatcoat trimmed in soft fur. She wore leather gloves and boots lined in more fur to ward off the cold, but left her white hair loosely bound instead of tightly woven in her usual braid.

Around her bustled the usual activity of a busy dock as cargo was loaded, unloaded, packed, unpacked, bought, sold, spilled, cleaned up, and generally moved or left still in boxes, crates, sacks, bags, bins, or wrapped in cloth. The primary difference was who was doing it all. She stepped out of the way of a gaggle of skeletons as they trundled past carrying a handful of large boxes between them while nearby what looked to be a pair of ghosts or spirits chatted on the prow of a ship, oblivious to the various other undead moving around and through them as they worked tirelessly. It was strange, but familiar all at once and the Drow noble found that simple mental conflict exceptionally intriguing, yet managed to keep her mind focused.

"You said we would find it here. Where?" she stated to her companion with a blunt, annoyed tone as she ignored the odd glance sent their way. Or that she thought was sent their way. It was hard to tell when most of the potentially curious bystanders had no eyes.