Private Tales Fat The Rich, Then Sink Your Teeth In. 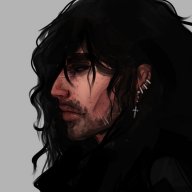 If you were blessed with a bevy of wealth, then Oban was a town that would treat you well; The capital city of the Kingdom of Dalriada was notorious for it's wealth and abundance. If you lived in central Oban, you were a somebody. Everybody wants to be a somebody, and the city itself was more or less a figurehead of powerful monarchy, and people from all across Dalriada would make faux-pilgrimages to the royals, all for a fleeting chance to find fortune or fame. If you were lucky, maybe you wouldn't leave on the wrong end of a blade. Such was the life of indulgence: Soak yourself in it, and you become hated or coveted quite quickly.

Of course, as crazy as you have to be to stake your life on the whim of a King...

There was likely no incoming traveler as crazy as the one that now crossed through the Widow Woods which bordered the walls.

The lone man had no horse, no vehicle to carry him; his only company was the echo of his heavy footfalls, as his boots sink into the soft dirt of the woods with each step. His boots had once been as black as onyx, now dirtied by the elements that had gathered along his trek across the Aberresai Savannah. His lips were chapped and dry, his long black mane a frazzled mess. Even so, he carried himself with all the elegance of a man with privilege and distinction. His ebony robe and shining trinkets around his neck certainly looked to be of high value.

Even more unusual than the man's supposed trek through hells and high water, was what he dragged behind him. He slid a large chest across the forest floor at his rear, left hand gripping tightly to a handle on one side. The track it made as he pulled it spoke to the weight of whatever was held within.

It didn't bother Orion, to have this burden of weight as he travelled to his next destination. Pain was something he'd become accustomed to, and fear was a friend that he embraced whole heartedly. He was not alone on this trip, he had the voices of many in his head, and they all agreed that this was the way. Soon, he would see the walls and farmlands that told him he neared Oban, and only then would he rest.

For the wealth of an entire family of slavers was something he held little love for, and it was a weight that his shoulders had no need to bear. 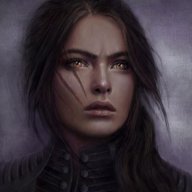 Besides idle opulence and greed, there was little Wren hated more than being outwitted - especially by the idly opulent and greedy. The Widow Wood had been disturbed almost an hour ago by her particularly hostile grievance, and now an eerie silence fell over it, as though it's chirping residents had eloped to a quieter space or hid silent among the canopy in fear of her frustrations, and crossbow, being redirected.

Carnage lay on the road ahead in the form of what had been a ridiculously ostentatious carriage, one that should have been carrying one equally ostentatious Duke and along with him, his city taxes. It was to be the King's birthday in a week's time, and she had heard of all the fat little geese flocking to the city to lay their golden eggs at the fat bastard's feet. The woods had been swarming with the city guard, trying to ensure the safe passage of each arrival into the city. Pest control, Wren called them, and she and her sisters remained the ever illusive pests.

The carriage, much to Wren's displeasure, had been a decoy, and their mistake had been a costly one. They'd been planning to take this particular carriage for weeks and it would take her some time to get over the failure. Her sisters had abandoned the notion of trying to placate her already, deciding it best to leave her to vent her wrath on her own rather than get in her way. She didn't blame them, she never did.

Wren had quite literally, torn the carriage apart, mindlessly convincing herself that it must be carrying something, there had to be something she could take from it, a chest of coins, a purse, a trinket, anything. The dimpled road was peppered with fire fodder; planks of wood, silk curtains, cushions, feathers, and debris from the carriage now picked apart from the inside, and it now lay on it's side as she slammed her dagger into it's underbelly to pry another splintery plank free.

"Come on, come on, come onnnn you measly bastarding rickety bucket of shit on wheels." she growled out through gritted teeth, the force of her leverage causing her to fall back as the wood came free and she clattered to the ground with an 'oof'. Nothing. No chest of coins, no purse, no trinket, nothing.

"FUCK!!!" she screamed out and threw the timber against what was left of the carriage and let herself fall to lay on her back, feet and fists slamming hard into the cold dirt like a petulant child infuriated by the word 'no'. She stared up at the skeletal boughs and heaven-bound branches of the oak trees that lined the road, she watched the thousand green hues whispering in the wind. It was all so calm, so gentle, so utterly relaxing and yet..it done absolutely nothing to calm her.

Wren seethed, her body trembled with exertion and a fury that was so loud in her mind that she hadn't heard the man's heavy footfalls or the grinding of the chest he dragged behind him until he was too close for her to have hidden. And so she took a deep breath and stilled, closed her eyes, and let her fingertips curl around her dagger tucked in at her side to wait in the hopes that her day hadn't been a total loss.
Last edited: Thursday at 6:13 AM

The man was aware that something had disturbed the serenity that surrounded him in the woods. The quiet, albeit beautiful symphony of nature herself had been crashing elegantly through Orion's ears like waters of a river headed downstream, cooling and soothing his wary thoughts and mind. Ergo, it was all the more jarring to him when the urgent swears and hastened movement of lighter feet against the dirt mingled with the soft sounds he'd been bathing himself in as he walked.

Ah... with distraction came his loss of focus. His grip on the sounds of the forest leaving him, his aches and pains returned, consequence of a body pushed too hard through too many elements. He again felt his own energies clawing at his skin like wild animals attempting to skin their fresh prey. It wasn't an overwhelming experience; Orion had lived with this pain for years, and he would for years to come. The only sign that he noticed was the brief tightening of his face, and a hesitation in his step.

Somebody was waiting for him, just ahead. He could see them now, brandishing something at her hip. In her wake lie carnage and wreckage betraying her beauty.

And lovely she was, exuding a simmering anger that Orion could only help but purse his lips together and admire. The last time somebody had gazed at him that way... A small chill ran up his spine, a rumbling in his chest as he remembered the hatred in the eyes of those he'd grown up with. He recalled vividly how they'd cursed his existence, as he lay curled on the stone floor of his own home, skin still burning with the power that he'd failed to maintain control of. Even now he burned, constantly reminded of his failure. It was funny, it almost made her presence nostalgic and welcoming despite her obvious intent to confront him.

Orion had no such intent.

He stops, the large chest behind him resting against the back of his legs. His posture, which had been slouched and exhausted, straightened as he stood tall before her. A storm of emotion swirled behind his eyes like watching a hurricane through fogged glass, and yet he smiled at the woman. Madness did not equate to hatred, and while he knew what she was likely to attempt, she had not attempted it yet, had she?

"Good Evening, Miss. I'm very sorry to intrude, as I can tell you're having a very bad day. You and I both are having rather rotten luck, it would seem." He looks behind him, eyeing the chest before his gaze returned to her. This time, his lids lowered as though downtrodden.

"You see, I've come across some old belongings of mine. They're quite valuable, but they're more like mementos to me than anything else. I thought it prudent to bring them to people who can truly use them. Far be it for some ragged fellow such as I to hoard such things. I'm off to Oban now."

He falls silent for a moment, and then his legs begin to move once more. He carries the chest closer to her, and then, when he stands mere feet from her, he turns to walk around her and continue on his way without further explanation. Perhaps it was that he didn't expect to get far.

He'd have been disappointed by the woman if she'd let him.