Private Tales An Adventure Through the Sanctuary 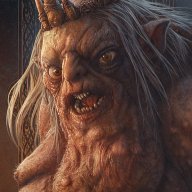 The voices continued to chant faster and louder, it was hard to decipher what was said but it was spoken in the Goblin language. The room around Harianra shook a little as though a small Earthquake hit the abandoned house. The red light behind the door began to pulsate as lub dub, lub dub a sound of a heartbeat was heard behind the door. As Harianra got closer, she noticed symbols carved on to the wooden door a severed of a Goblin was seen nailed to it as the dried blood surrounding began to glow a dark red light.

Harianra is incapable of casting spells, but even she felt the hallway thrumming with magic. Her vison goes dark for a moment, then immediately there was a blinding light. There was a blast that lifted Harianra from her feet taking the Knife away from her hand and landing onto the second floor below. Ahead of her knife, the door slammed shut though there was no one in the vicinity.
Reactions: Harianra Auceus

Oh no....This was not a good place to be. Why couldn't she be good at magic like the rest of her family??

Her skin tingled as she felt the magic brewing around her in the air. The sounds did little to calm her down. The fluctuations in light caused her own heart to beat quicker, as did her breath.

Darkness, then light and she was thrown from her feet, clambering for the knife that slipped through her fingers until they both fell hard onto the floor. She paused for a moment before crawling on the floor to snatch up the knife again; her eyes never leaving the door that slammed shut. "I'm not here to hurt you! I am just...laying low for a while, okay?"
Reactions: Griag The Goblin King

There was no answer from whoever was chanting behind the door Harianra tied to reach for the knife but it had fallen to the second floor below. There was smoke coming from behind the door as another small tremor was felt. Harianra can feel the area vibrating just a little bit as she heard a noise behind her. A rusted lead pipe had fallen onto the floor and rolled next to her sandles.

Her hand came up empty.

Harianra held her breath as the tremors came again, almost bracing herself as she wasn't sure how long they'd last or how rough they'd get.

But then it stopped. After the pipe rolled to her feet, she took it in hand. At least she had something to use in case of danger. But it wasn't as though it gave her much confidence. Harianra stood up once again. Using the pipe, she knocked on the door. "Hello?"
Reactions: Griag The Goblin King

As Harianra tapped on the wooden door blood slowly began to seep out through the cracks. The Goblin head that was nailed to the door began to make a gurgling sound. It's glassy, grey eyes turned into a dark blood red. His jaw moving up and down while its teeth clacked against one another. The room continued to get brighter and brighter seemingly absorbing Harianra inside the door.
Reactions: Harianra Auceus

Harianra's eyes were drawn to those of the dead Goblin. As the jaw started chattering, she stumbled back, holding the pipe between them defensively.

As the light brightened far too much for her eyes to take, she covered them with her free hand and turned around to head down the stairs.
Reactions: Griag The Goblin King

Harianra attempted to escape the light obscured her vision absorbing her though the door and knocking her out. By the time she awakened she found herself inside the room where blood was everywhere by in the area she's in. It's still dark though so it's best to find a source of light.
Reactions: Harianra Auceus

Harianra didn't even notice that she was knocked out until she started to wake. She sat herself up slowly, feeling the wetness on the floor on her skin. "Oh what now....??" Getting to her feet, Harianra searched for a window. She spotted curtains and grabbed hold of them, pulling them back so that she could hopefully see better.
Reactions: Griag The Goblin King

As Harianra pulled the curtains all she can see is a hazy fog along with some music playing:


There are some candles along the bookcases but the Drow will have to find the lighter in order to light the place up. As she explores, small droplets of blood fell from ceiling splattered on her exposed cleavage.
Reactions: Harianra Auceus

Harianra squinted as she tried to peer through the fog. But she saw nothing. And what was making that music??

At least she could see a little. Enough to see that there were books on the shelves and...candles! Surely there had to be a flint or something to light them.

As she began to look through any drawers or cupboards that she could find, the droplets were felt on her head and her chest. Harianra looked down, wiping one of the droplets with a finger. Blood. "Perfect...." She wanted to look up but didn't, not entirely sure that she'd like what she'd see.

Finding a lighter, she went back to the candles and lit one of the wicks.
Reactions: Griag The Goblin King

As soon as Harianra lit the candle the ritual circle began to glow in front of her:

There was two piles of black dust standing parallel to the circle as well as a shaking dresser in the middle. It began to bounce around as though something wanted to get out.
Reactions: Harianra Auceus

Harianra gasped as the circle glowed at her feet. Magic! Oh no! She hated falling victim to magic. It just wasn't fair! Magic never did her any good. Everyone tended to use it against her and hold it over her head that they could do it while she couldn't. Why else was she married off to a Goblin King? It was because she had no other uses for the Drow.

As the dresser began to shake, Harianra wasted no time and headed for the door, lifting the latch and hoping it would open so that she could leave.
Reactions: Griag The Goblin King

The doorknob refused to move no matter how many times Harianra tried to wiggle it. The dresser continued to shake violently. Behind Harianra there was a closet, the wooden door began to open the sound of the hinges creaking briefly over took the stomping from the dresser.
Reactions: Harianra Auceus

"Oh come on!" Harianra pounded on the door once she gave up on the door handle. "Let me outta here!"

The creaking caught her attention. Hesitantly she turned to look, expecting some hideous creature to slink out of the closet, her eyes darting briefly to the window. If she ever needed to, she could break it and jump out.
Reactions: Griag The Goblin King

Inside the closet was full of clothing dripping with blood they seemed to be too big for normal Goblins to wear. On closer inspection, Harianra could see the fine linen flowing robes with bright colors. The Falwood Elves perhaps? Behind their bloodied clothing lies a bag full of documents maybe reading them could explain what's going on.
Reactions: Harianra Auceus

Clothing was the last thing that she had expected. And on account that there was blood dripping...there just had to be something else.

Curosity won out though, and she went closer to inspect it, taking note of the brighter colours. Gingerly Harianra pushed them aside and spotted a bag? She took hold of it and dragged it out. "There better not be any body parts in here..." Setting the candle inside, she opened the bag and started to inspect the contents.
You must log in or register to reply here.
Share:
Facebook Twitter Reddit Pinterest Tumblr WhatsApp Email Link
Top Bottom