Toned athletic build of a horserider. Typically wearing average, well-worn traveling attire appropriate for horseback riding. Her olive skin is a dusky contrast to her vivid green eyes, typically the most exotic feature to be noticed first. A series of freckles are scattered across the bridge of her nose and cheeks.

+ Expert horseback rider
+ Adept at appraising the value of commonly traded goods
+ Average at appraising the value of luxury items
+ Able to read, write, and skilled in using an abacus
+ Fluent in common, Kaliti, Dwarven, and trade languages
+ Good at bringing consensus among diverse people
+ Magical affinity towards biomancery - able to manipulate organic features and physiques through the cost of materials. She can use these materials to change eye color, smooth out scars and such with only a tiny bit of pain.

-Approval-seeking
-Overly sensitive
-Indecisive
-Self-sacrificing
-Rigid and uncompromising
-Overprotective
-Manipulative
- Magical affinity towards biomancery - not well trained; her abilities to manipulate require the cost of the material. The magic is heavily tied to the law of magic that 'Magic has an end. In time and without intervention, a spell's effect fades. Could be seconds, years, centuries - but things such as a curse or enchantment never last forever. Only the physical scars of its power will remain' Xayah's use of magic will quickly fade, her alternations and manipulations reverting back to the original state prior to her alterations. IE: if she heals a wound, it is only a temporary patchwork, as the healed flesh will reveal a scar, then an open wound, and finally the original injury with the same amount of pain the injured had.

Xayah, is a strong extravert and enjoys spending time with other people. Her familiarity with trade is enhanced with her great people skills and is often described as warm, affectionate, and supportive.
Xayah is great at encouraging other people and derives personal satisfaction from helping others. However, she is so interested in devoting her time to others that she can neglect her own needs.

Xayah also has a tendency to be too hard on herself, blaming herself for when things go wrong and not giving herself enough credit when things go right. Xayah is altruistic and interested in helping others, which can sometimes come off as a bit overbearing 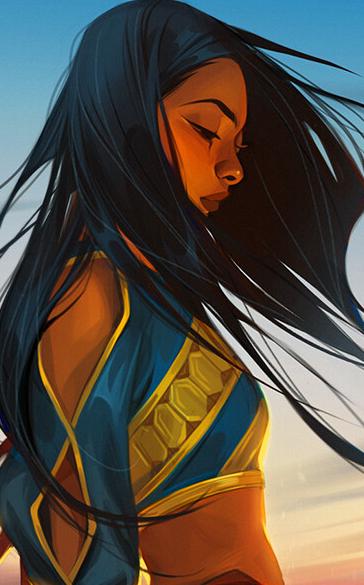 Xayah comes from a merchant family originating from Lazular, a city that centers its systems of prestige and power on horse breeding and horsemanship, retaining a strong reputation in this respect. The seventh daughter of fifteen, Xayah is just one of many children of Rasheed El-din Vashti and his many concubines. Not even a child of the first wife, Xayah bears nor holds any sway on her father's trade.

While still subject to her father's will, Xayah was granted a measure of freedom by her ability and willingness to assist with the trade convoys with distant lands.

This page has been seen 202 times.