Bees dance around the fiery stag. A foreign beast comes for blood. High the stag raises himself up on his hind legs. The challenge gladly accepted. Swiftly he rams the outsider. Instantly they tumble dead upon the ground. Cheerful once more the bees dance about. The fiery stag has saved them once more. 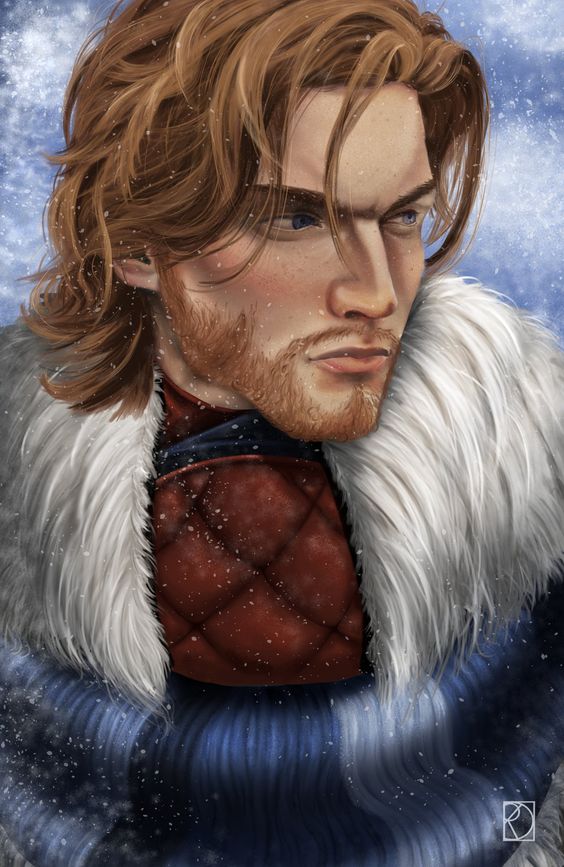 Tinus is a man of average height leaning towards the taller end. His body is muscular from a lifetime of hunting, fighting, travelling, and carrying around portable bee hives.His hair is a light auburn that is curly and kept somewhat long and unkempt. His beard is the opposite by being kept short and well trimmed. His eyes are the same shade of gray as river stones. One might call him handsome if he ever showed his face outside of his homeland.

His skin is white but has several black tattoos across it. Over his heart is the image of a gryphon with its wings spread inside of a circle made out of stag antlers. Around his right biceps is a pair of circles made from the same antler design but with what looks like a river between them. Under that tattoo is another one that forms a circle out of bees and honeycombs. On his left bicep is a stag standing up on its hind legs with gryphon feathers forming a V shape under it.


Warrior-born: Tinus is a natural born warrior. He has taken to the art of combat easier than others. It has always felt natural to him to have a weapon in hand and armor over his chest. Because of this he enjoyed the training all his people go through learning to defend themselves and always pushed to learn more. This has expanded his skills and knowledge to a point that only more experienced fighters tend to possess. He is quick to absorb new techniques. He is all too eager to accept a challenge or request to duel purely for the sake of getting to fight. A fact that proves to be more a source of trouble than good for him.

Adaptive: Tinus is a rather adaptive person. A trait his people encourage. He has a willingness to shift his approach and tactics when needed and is quick to get use to stressful circumstances. It makes torturing or manipulating him a challenge. It also can make ambushing him tough as that window of surprise does not last nearly as long with him. It has given him an easier time surviving outside of Kelon than the more rigid members of his people.

Stubborn: Tinus is a very stubborn man. It is not always an issue, but once he has made his mind up about something there is no changing it. This can be a good thing as once he sets out to do something he won’t stop till it is done. He will keep his promises and his contracts if it kills him. His spirit is near impossible to break.

But it also is often the source of his troubles. He rarely apologizes when he has become upset about something and said or done something he shouldn’t have. He will do as he pleases (outside of work and his obligations) regardless if others may wish otherwise. And he can have a bad habit of not listening to someone while upset at them even if it ends up hurting him.

Bee-loved: Tinus has an odd aura about him. Animals are unnaturally calm around him. This allows him to get closer to them, handle them more easily, and even at times mount unbroken animals. But when it comes to bees, wasps, and hornets Tinus is truly beloved. He can move through an angered swarm ready to die to defend the hive and never be stung. Where a bee keeper would normally need special clothing to protect themselves he does not. Why this occurs is unknown. Some say it is a manifestation of latent magical ability within his blood. Some say he is beloved by his ancestors. All anyone knows is if there is a matter involving removing angry animals then Tinus is the one to get.

Pipeweed Lover: Tinus enjoys pipeweed. He enjoys pipeweed nearly to the point of an addiction. Because of this he has some problems. He will have plenty of issues with his lungs in his old age, but for now his only problem is with large amounts of smoke. If he is exposed to too much smoke then it will trigger coughing fits and he will have a harder time breathing than others. It can lead to him passing out and potentially putting himself or others in harms way during a crisis.

Tinus’ other problem related to his love of pipeweed is if he goes for too long without a puff then he becomes irritable and even more stubborn than usual. While it never reaches the point of compromising his contracts, it can make working with him difficult. His usual cheer can even turn a bit petty and spiteful if he has gone without some long enough.


Tinus is a man with two faces: cheerful and casual or stoic and professional.

While doing his work as a mercenary, Tinus is the very image of a professional. He does what he is told without complaint, follows his order to the letter, and doesn’t express his personal opinion unless it is asked for. His words are short and matter of fact to the point of being drier than the sands of Amol-kalit. No indulgences and no personal time. He does his job and he does it well.

While back home in Kelon or off duty with his fellow Kels, Tinus is a wellspring of cheer. He is a man who enjoys life and all the little vices it offers. Things are done based on how he feels and he tries to not let things get too serious. He is known to hum, whistle, and sing while he preoccupies himself. Those who get to experience this side of him get annoyed at how much he tries to feed those around him constantly, as if he were their mother.

This page has been seen 70 times.