- Jon Bucklebolt​
Khazar, formerly the capital of the Kingdom of Khazar, a minor power in The Spine. It's influence in the court of Belgrath was great but its lands were relatively inconsequential, managing over the immediate valleys at the base of the mountain including the Valley of Tholbor. King Flói was the last king of Khazar, a respected dwarf who had fathered two sons.

Khazar was most known for its extensive mines and great forges, forging armor made of black steel. While its properties were equal to ordinary steel the substances used during the smithing process turned the steel black. Dwarves thought naught of black steel but humans had popularized it with famous adventurers, knights and nobility seeking out suits of black steel armor.

Khazar utilized its extensive mineral resources to arm its military with great armor and weapons, providing Khazar with an elite army. Despite this the city fell quickly overnight. A curse carried by a returning son devastated the population. A curse of undeath. As one corrupted individual bit the next it spread rapidly from the poorer quarters where population density was at its highest.

King Flói quickly rallied what remained of his army in the following hours, realizing what devastation the curse could place on his surrounding lands outside the city he ordered the gates sealed shut. Runesmiths and sorcerers were guided to the gates where they closed them. Ancient primordial runes were placed on the seals and sorcerers cast ancient warding spells on the Great Gates of Khazar.

In the waning hours of the Kingdom of Khazar the armies of King Flói retreated into the cities fortress, barring the gates shut from the dead. Despite this the curse had managed to get within the walls, devastating what little remained of the army.

Legends say that Prince Dolgan fought to the last at the Great Gates of Khazar, allowing time for the proper seals and wards to be placed. King Flói outlived his son and heir and fled into the vaults and was killed by creatures of such opportunistic nature and sly movement they were able to sneak past the living dead. Goblins had slain the King, drowning the gold in King Flói's blood and taking with them the Kingdoms wealth.

Despite such tremendous loss of life, a handful of Dwarves from Khazar had survived, including the youngest son of the King, Haelen Blacklocks. These Dwarves had survived by fleeing the city moments before the gates closed, and those who had been away from the city at the time of the curse. 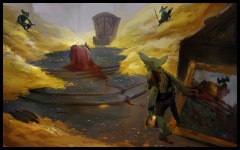