Page Comments View
"It is easy to hate and it is difficult to love. This is how the whole scheme of things works. All good things are difficult to achieve; and bad things are very easy to get."
-Confucius​

Eastern Martial Artist- Skilled in both armed and unarmed combat, utilizing a martial style not common to the local lands, watching Tien fight is akin to watching a performance. Many often compare Tien’s fights to be like the crashes of the sea, as the man ebs and flow to his opponent’s stance, using speed and strength to create a deadly balance that could match the powerful.
Reflexes, Agility, and Acrobatics- It’s a wonder to watch Tien move, as one minute he appears to be as light as a feather, than the next moment he comes down with similar momentum to a falling boulder. Tien has no trouble in moving, possessing a large horizontal and vertical movement capacity
Harmony of Yin & Yang- A form of Eastern power that combines the concept of arcane magic with the spiritual mindset of harmony and duality. In of itself, these are not just magic spells, but a collection of techniques that belong on a larger spectrum that encompasses the concepts of order and chaos. Each side of the spectrum possess its own strength and weakness, and Tien can take advantage of either side at the cost of the other, or utilize both sides at the cost of either extremes. While spells and techniques may consume varying degrees of energy, the three states of mind do not; each exhibiting a certain attribute of strength and weakness, but do not inherently drain energy.
Tea Maker- Some form of herbalist, Tien is highly fascinated by tea, often excited to examine the local variants of tea. Tien is also said to concoct various “blends” of tea, mixing in different herbs and leaves to achieve a variety of different tastes.
Fishing- Another one of Tien’s hobby, as he often drifts towards lakes and ponds to partake in this activity. Most of the time, however, Tien’s activity remains a “catch-and-release” affair.
Calligraphy- More art then writing, most people would mistake this as "painting". To put it mildly, it is describe in the native lands as the art of giving form to signs in an expressive, harmonious, and skillful manner.

Countering Range- It is said that one of the areas that Tien struggles in is his ability to counter ranged attacks(although he can defend against them). Although powerful at close range, if foes are out of reach of his blade, there is very little that he can do other than dodge out of the way. However, Tien does have ways of closing the distance...

Bo-Staff- Appears to be a rather ordinary staff...although, one end is always wrapped around some sort of rag...while the other is rather...pointy.

Dragon’s Fang- A “Guan dao”, which is a glaive equivalent of a polearm. The Dragon Fang on the surface appears to be a rather simple polearm with a red tassel attached between where the pole and the blade meet. However, it is said the weapon was crafted out of the a Dragon’s Fang. The weapon’s pole portion extends roughly 6’, while the blade portion extends up to 2.5 Feet. On the hilt is a spear like point, which can used in both stabbing or thrown as a javelin. It is said that the weapon is magically enhanced, as has been evident that Tien has “disappeared” into the weapon(usually after throwing it) only to reappear once the weapon has impaled itself onto something.
Eastern Clothing- Between his colors, his eastern looking stray hat, his weird looking armor and knapsack, Tien catches the eyes of many. One observation that most people make immediately upon observing him is how tattered and dirty his clothes are, although that doesn’t seem to bother him all that much. It is only on occasion where one may observe that he has washed his clothing, although his own hygiene remains a bit better.
Eastern Beads- It would appear that these beads are more of a religious item than an inherently magical item, and is often seen gripped in Tien’s hands. It would appear that this item helps Tien focus. 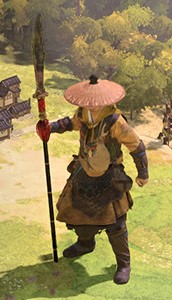 Tea Pot- Hanging from his belt, a batter Eastern bronze teapot dangles, and often used for boiling water for tea. It presumably comes with a set of Eastern Tea Cups, as they are seen in use whenever Tien is drinking from the pot.
Fishing Line- Attached to his “staff”, transforming it into a makeshift fishing pole at a moments notice.

You wouldn't know what to make of Tien when you first meet him, as it is very difficult to read a man such as Tien(his hat in the way probably doesn’t help). Many would assume he’s a rather cold individual by his facial appearance, maybe even a lunatic if they hear his gibberish like muttering. They usually do, unless they see his smile, a feat not all people have seen. Kindness and generosity are somethings that the humble have said about Tien, as despite his poor appearance, he insist on giving more than he receives. Most of the time it isn’t even money that Tien imparts, but various skills and life wisdom, almost always over a cup of tea. At least, this is how he is to the humble and the unfortunate. To those on the opposite end, at best he is indifferent, his ears deaf to any schemes of greed, and at worst he can be...deadly. A form of righteousness would not be too wrong when describing Tien. Being somewhat of a foreigner, Tien views the concept of morality, right or wrong, at its barest. It would not be far to say that he has protected the helpless on a few occasions, not always by means of lethal force; killing is really a taboo for Tien. However, it’s quite evident in his history that it isn’t because he lacks the stomach,which incidentally has gotten him in trouble with the local authorities from time to time(though not the first time he’s stood up to tyrants). Rather, Tien’s disdain of killing is a result of a complicated philosophy born out of a combination of experience and reflection. Tien travels to see the world, that much is certain and he is rather curious of many things, observing first, than asking questions. The reason that Tien walks these lands are a mystery, yet it is a mystery that may soon be unraveled...

Not much is known about this man prior to his arrival to the Western Continents, besides the fact that he is a foreigner, given the strange way he dresses and the (allegedly)incomprehensible gibberish he mutters to himself. Some say he is some sort of spy from an Eastern nation, while others whisper that he may be an exiled prince, and yet still others believe him to be some sort of sage or wiseman, but many believe he’s mentally insane. What is known is that this fellow is a bit of a wanderer, appearing all over the various location over the greater Arethil, usually settling down on a street side, sometimes begging for money while other times...just sitting there...doing nothing.

Aside from his dress, one of the more notable things about this fellow is his interactions with people. It is said that if this man has brought great fortune into the lives of many, usually the unfortunate and downtrodden. One particular story comes in the form of the story of the Farmer’s back. See, there was once a farmer who broke his back during his labors. The local town healers were able to prevent further damage, but were unable to heal the man’s back. At best, they could prescribe drugs to nullify the pain, which were expensive.

The morning the foreign man returned, asking that the farmer come with him outside. A strange request to say the least, and a request that was almost rejected. However, the farmer decided to give this man a chance, and was helped outside, where the man in yellow requested to be left along, instructing the family to return to their daily duties.

For a couple of weeks, this man in yellow would come two times a day: One day in the early morning before sun rise and in the evening during sunset. Each time, he would ask the farmer to accompany him outside, not too far from the house. It was here, he would instruct the farmer in practising some sort of slow moving martial art. After roughly an hour of practising, the man in yellow would help the farmer back into the house, before leaving without a word. In between the two points, the man would be seen sitting on the street, not even begging. During the night he would often be found asleep on the streets. Any attempts at charity were almost all politely rejected by the man in yellow. For weeks this routine continued, at first the farmer scoffed at the idea of doing what he at time referred to as “silly gestures”. It was only at the persistence of the in yellow and the excruciating pain that promoted the farmer to attempt these “gestures”. Things were indeed painful and slow at first, but the man in yellow was patient in his teachings. Day by day they made progress, the man in yellow would coach the farmer through the pain, and day by day the pain began to...lessen. Movements, once choppy and uncoordinated, became smooth and coherent. The mind became clear as the farmer continued his routine with the man in yellow, and gradually, his back healed.

One evening, the man in yellow requested the farmer to join him for a couple of tea. A surprising request, seeing that the man never stayed around that long, but the farmer agreed. The whole affair was rather quiet, to say the least, the only conversation spoken was of family, farming, and the tea that they drank, which seemed to be an oddly tasty blend(the farmer himself never drank tea). Once concluded, the man in yellow would proceed to leave the farm as always.

Later that night, it came to the farmer realization that he could fully stand up straight again. His back was cured! To a point where he could lift up could not just lift up a hoe, but lift up both children once more!

It was also the last time the farmer ever saw the man in yellow, as the man in yellow did not return in the morning for their routine practices. It was later when someone had said they saw the man leaving the village in the evening, not before handing a note to the local tavern keeper. No one knows what was written on the note, presumably words of goodbye.

It is to be warned that those actively seeking this individual out of pure greed would walk away with little more than lost time, with some of the more extreme characters perishing in the process.

The 3 Blades of the East

This page has been seen 169 times.