Tall, dark haired- with an imposing muscle mass, Arnor is not unlike most Nords, save for his choice of hairstyle in that of the more aggressive warriors, a thinner shaved beard and neatly-tied hair. Recently, Arnor's hair, like his father, has taken a more gray appearance, despite his younger age. 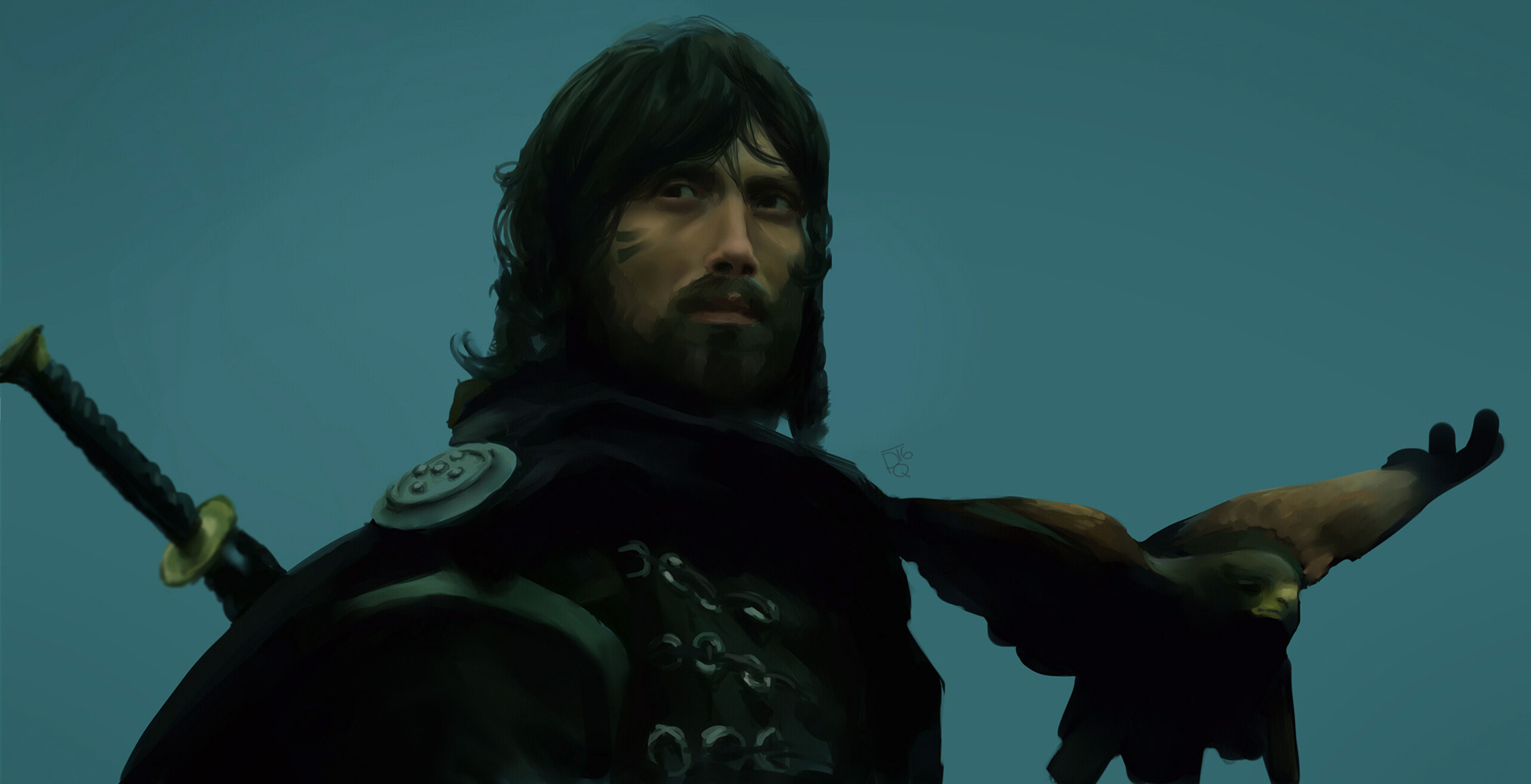 Wrestler. While not a skilled striker, Arnor is an accomplished and well-practiced wrestler. Given his strength and size, it is inadvisable to enter a grapple with Arnor.

Violence. Arnor, is capable of brutal acts of violence with his sword, hands- anything lying next to him, and has no qualms about doing so.

Intimidation. Arnor seems to have a gift for making people nervous.

Hunter. Arnor possesses the skills of a gifted hunter- along with his people's knack for smell and tracking, it has made the transition of hunting game across tundras and ice-laden forests...to hunting people, fairly easy.


Loud. Angry. Happy-go-lucky. Adventurous. Greedy. A man with a death wish, and a desire to live life to it's fullest, a conflicting ideology of how he should live his life manifests in how he talks and acts- usually brazenly, with little regard to anyone's feelings, thoughts about him, or what they might be able to do for him- he lives entirely too much in the moment.

He loves the idea of wealth, not for hoarding or the prospect of building something with it- but to spend it, and spend it lavishly. His favorite vice is as most Nords, women and drink. He is particularly fond of liquors, and has a reputation for overindulging on them.

He has a soft spot for children, and loves to teach them what he knows and share tales of his travels. He has a passion for architecture, and often, asks to see the most beautiful building in the cities he visits for the first time. He also has a lack of awareness for cultural norms, and applies the brazen, abrasive nature of the Nords wherever he goes, either to his advantage or disadvantage.


Born to Skuld Thralson and Bera Falndottir- the former being the Jorn of Faarin, a settlement outside of the Sanctuary Valley of the Nordenfiir. Arnor grew up hunting the prey herds, and avoiding the much-revered Pale King. However, as times worsened due to a particular brutal winter- and his father, suffering from the impending loss of his great love, Bera due to a chronic illness, thought that perhaps, the influx of coin and trade with the Summer Lands for their meats and pelts would bring more prosperity, and the hope of treatment, to his ailing wife.

However, his ambitions only got him the wrath of Lordahn.

Skuld led a hunting party, intent on removing the one thing that would prevent the prey herds from being protected of his hunting parties- the Pale King. He knew that the Pale King was revered, but also knew that without him, the prey herds would be subject to easier hunting from the Nordenfiir- but the hunt ended disastrously. During the journey alone, Skuld's party was picked off by predators and the storms that plagued the tundra, and eventually, Skuld only managed to inflict a minor wound on the Pale King, before he was forced to return home in shame.

Facing the impending wrath of Lordahn, Skuld turned to drink and the abuse of his sons to deal with his upcoming fall from grace. Skuld was particularly brutal to Arnor- and eventually began to beat him. While he would berate and beat both sons, Arnor, the younger, would receive the most of his father's wrath. Eventually, Arnor had enough- and in a night of another drunken rage, Arnor retaliated against his father, and the aging Skuld- saw firsthand how the rigorous training he had been putting his son through to become a great warrior had paid off, and Skuld was beaten and stabbed to death with the bottle of wine he was using to beat Arnor not moments prior.

Lordahn, the same night, had sent agents on his behalf to collect Skuld to be executed for attempting to kill the Pale King. Arnor was never told that he was let go, and has been lead to believe he fled to the Summer Lands, when it was Lordahn who spared him for saving him the trouble of killing Skuld himself, and also by tarnishing his legacy- feeling that it was a far worse fate than to be killed by his own son, than executed by his king.

Moving to the Summer Lands, Arnor soon found work as a mercenary- his prowess for combat, with his bulk and mass earned him quite a bit of work, from loan sharking- to breaking skulls. It was this way for many years, until Knottington. Knottington was a small fishing and trading community set upon by Naga coming over the spine. Arnor and several other reluctant heroes took up arms and defended the town. Arnor was given the title the Axe of Knottington for his tenacity in defending the town.

Following that, Arnor took some time to gather himself, and worked at an inn, and helped rebuild the town of Knottington. He was eventually recruited to help defend Belgrath, but ended up enslaved by the Orcs following his wounding while bravely defending the keep. Recently, Arnor has broken free from his Orcish imprisonment with the help of a childhood friend, and now resumes his Mercenary work, albeit with an altered worldview.

This page has been seen 683 times.