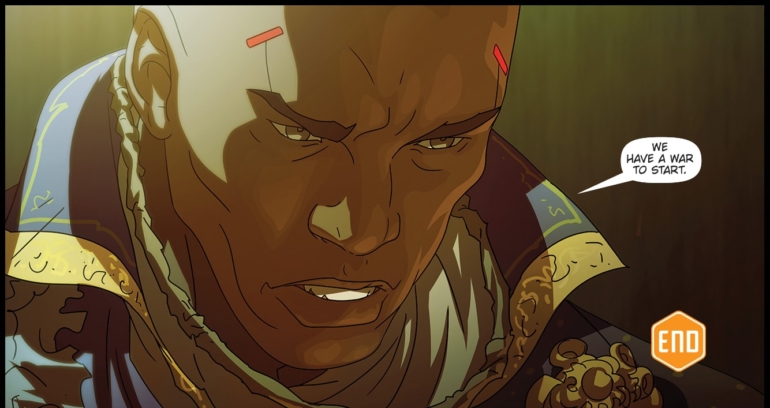 Known around Arethril by his many nicknames: Dragonslayer, The 1st Good Man, The One Man Army, The Harbinger of Death and the Soldier of Fortune (and many more). Cryus stands at 6'8 and is very muscular. He is cleanly shaven with brown eyes and a thick wide jaw. He wears warpaint which can range from simple stripes to decorative, scary symbols designed to intimidate the opponent. Cyrus is the founder of the Black Falcons. It is considered the one of the best If not the best mercenary company Arethril . He is intelligent, philosophical and very ambitious desiring to expand his mercenary company. He also deeply cares for the mercenaries who serve under his company, knowing all of his employee's names and will risk anything for them. In recent events his ambition clouded his moral judgment as he became more and more radical.

Cyrus is known as a living legend on the battlefield with the scars to prove it. He uses his massive size, strength, and speed to overwhelm his opponent while wielding a Greatsword. Cyrus' swordsmanship is direct and powerful but still agile and dynamic. When he consumed the Dragon's blood as a reward for slaying a dragon, Cyrus became a Reaver adding to his already formidable physical attributes and he often draws power from the pain he sustains during battle augmenting his already impressive strength. Cyrus doesn't rely on brute force alone, he loves to use psychological tactics. Often employing taunts and manipulation to create doubt in the opponent. Cyrus believes that a battle is won once you dominate the opponent's mind. As soon as he smells a hint of emotional weakness, Cyrus capitalizes on it seeking to demoralize the opponent then attacking as soon as his guard is down. Cyrus greatest attribute as a fighter is his will. His ability to power through despite suffering major injuries. He WILL not get beaten into submission. Though a battle hardened merc who displays fast, fluid and creative swordsmanship; Cyrus is not without weakness, while flexible Cyrus lacks adaptability and will struggle against fighting styles that he wasn't already familiar with. He is also very arrogant and has a tendency to underestimate his opponents. Something that can be exploited in a fight against Cyrus.

Cyrus was born somewhere in the ports of Aina o Ka La. His father was a fisherman and his mother was a healer for a local hospital. As a child, Cyrus was described as an introvert who developed a love for fighting. While his parents were working Cyrus would often observe the sailors fist fighting for money in the abandoned warehouses and took note of their fighting techniques. Cyrus was tall as a child towering over other children, he would often challenge kids to fight him and will come out victorious. Cyrus also developed a love for reading to the point where if he wasn't busy fighting, his face would be an in a book reading the tales of honorable knights or about the philosophies of the Seers. Cyrus maintained a close relationship with his parents who while they expressed their disappointment with his love of fighting preferring Cyrus to pursue more academic ambitions they did notice his talent in it. At age 18, Cyrus worked for a small time mercenary company called the Skull Crushers. He began his sword training under their leader: Nazeem. Cyrus excelled, impressing Nazeem and over the next 7 years they worked together and help build the Skull Crushers with their most notable achievement is being part of the 20 good men: Mercenaries freelance and part of a company who were under contract to slay a Dragon in the Allir Reach with Cyrus executing the final blow to the Dragon. The one gave the job, rewarded Cyrus the power of the Reaver.

He then traveled to Alliria to find that the story of him slaying Dragon has spread and he became truly respected and feared. Cyrus celebrated this, by going to a whorehouse and sleeping with a prostitute. One day she came to him, saying that she was pregnant. Horrified and unwilling to be a father, Cyrus abandoned the pregnant prostitute refusing to take part in the child's life. As his accolades as a mercenary grew, so did Cyrus' ambition. He grew frustrated at Nazeem for not expanding the Skull Crushers after killing the Dragon, feeling that he was becoming complacent. He expressed his frustrations at Nazeem. It is unknown what happened next, but it ended up with Cyrus killing Nazeem and taking over his Mercenary Company. Cyrus renamed it the Black Falcons and continued the reputation that he established when he first came joined the Skull Bashers. After finding massive success in Aina o Ka La, Cyrus sets his sights on the other countries of Arethril and started to take on contracts such as participating in wars, kidnapping, and other things. Cyrus has a clear goal: Have the Black Falcons be the greatest Mercenary Company in history and become the greatest mercenary the world has ever known.

This page has been seen 151 times.