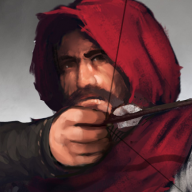 He'd already drank a full mug of mead with breakfast when Gerard remembered that today was the day he was supposed to be protecting that girl; he'd wandered to Oban after his lover had lost her memory, and he couldn't bear to return to Alliria to see the smoldering ruins of his former guildhall--so perhaps, he thought, someplace new might help. Unfortunately, the only thing that seemed to help at all with the pain was a stiff drink, but that combined with the price of lodging eventually had him looking for mercenary work again. He thought perhaps he'd join another company, stay in the back with his bow, maybe earn a few easy gold pieces to pay for his habit--but fate had had another plan for him.

He'd found a flier asking for help escorting some rich family's daughter all the way to Fal'Addas; he knew the way, and he needed the money, and he had the guild's reputation he could still use, so he did, and conned them into believing they'd hired an entire guild to help escort their oh-so precious daughter. What could be safer than having a whole guild at their back? It was half pay now, half when the job was done, and the roads to Fal'Addas weren't so dangerous that he couldn't handle them on his own. Well, at least not sober, and at least not when he'd been in his prime. And besides, he had the money now, didn't he?

So he was waiting in the tavern for his ward, quickly giving the cup of mead back to the barkeep; after all, who would trust a drunk mercenary with their daughter? He harbored no ill-intentions, of course; Gerard was more preoccupied with getting the money, and moreover, he wasn't that type of man to begin with. He still had a magical bow, at least for now, and his swordsmanship was at least passable. It wasn't a complete scam, but they could certainly have found better protection than him...

He took another bite of his breakfast, then put the fork back down, wiping his beard clean of any food with a cloth. Soon he'd have to actually work, and that meant taking a break from the drinks to make sure he could actually see the road straight. It also meant the nightmares might come back, but he'd deal with that when they happened... 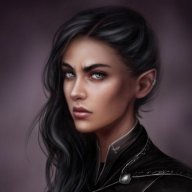 As much as Brynn wanted to leave the estate that she spent her life shackled to, she found it quite pointless to go visit her grandmother in Falwood. A grandmother that she had never met before and now, twenty-eight years later, she wanted to meet? The second thing that she found to be silly was the fact that they had hired some random guild person from Alliria to escort her. Her parents were truly strange sometimes.

Brynn had been dressed simply for this trip. Black pants, black boots, and black top. It was boring but, honestly, she was past caring at this point. She had wanted some color in her shirt at least but nooooo. She was already over this as she looked over at Samuel with a scowl.

"Why can't he escort me to Falwood?" She had asked her parents before they left for Oban to meet the actual escort.

"Because we need Samuel here at the estate. We cannot spare anyone and you know that," her mother had answered.

"And Samuel has never been outside of Oban," her father had added.

There was a lot of eye rolling and glaring as her parents kissed her cheeks and told her that they would see her when she returned. She had left with the payment for the mercenary, some extra coin for herself, and a single pack with some extra clothing.

She stood outside The Original - Oban with Samuel and three other members of the family guard. Her arms were crossed over her chest as she glowered at everything and everyone. They had only been gone a short time and she was already ready to go back home. She had always been torn about traveling and she had not been off the estate in ten years. There was some anxiety bubbling up and mixing with her irritation.

Brynn finally pushed the door open and looked around the tavern. The woman had no idea who her escort was so she just hoped he was smart enough to figure out the woman with four guards would be a giveaway.

He'd been drunk enough when he accepted the contract that Gerard had already forgotten that his clients were an elf and a human, and their daughter was the invariable product of their union; he'd met elves when last he visited Fal'Addas, learned much of their ways and skill with the bow, though he was far past his prime as a warrior. No, he was more suited for desk work and bookkeeping now, but with his company in shambles and the love of his life gone, such possibilities were gone from him. Far gone, now.

In entered the young lady, and three guards--an amount suspicious even for the wealthy, Gerard thought--and his keen eyes determined she was the one not only by her ears, but her posture as well, fitting of one born into the upper echelons of society, even in somewhere as distant from Alliria as Oban was. He was much more humble in appearance, slouched back in his chair in a worn chain shirt with a cloth hooded cloak over it, his bow slung over his chest and a sword and quiver of arrows at his belt. His appearance was largely utilitarian, and his disheveled hair and beard contributed to the look that Gerard had likely seen better days, if he'd even seen them at all.

He stood up, retrieving his coin pouch to place a few silver on the barkeep's counter before approaching the noblewoman, inhaling deeply before introducing himself.

"You must be the Granfaere girl," he said, giving a slight bow. "I am Gerard, of the Brotherhood of the Bow. I'll be escorting you to Fa--your destination. I assure you your protection will be of the utmost quality."

It was a sad lie, but he needed the gold, and desperation often drove a man to madness...

"Yes, my name is Brynn Granfaere," she introduced herself to her escort before turning to look at her guards.

"Thank you for escorting me here. Please tell my parents that my guide, Mr. Gerard, seems capable enough for the task." Her guards handed over a coin purse to Gerard and then departed from the tavern.

"I suppose I am ready to leave whenever you are," Brynn said as she held on to the leather bag that was slung over her right shoulder.

Oh there you are, my dear, so beautiful.

"What?" She said out loud to what she thought were Gerard's words until she realized it had been a woman's voice. Clearly she was sleep deprived or something to be hearing voices already.

Of course, regardless of her origins it seemed a noble's daughter was a noble's daughter still, and that meant Gerard would likely be enduring a certain amount of arrogance and haughtiness that came with the territory... but money was money, as he begrudgingly told himself, and the alcohol he was buying could at least stand to improve in quality, if not quantity.

He saw off the guards as Brynn bade them to leave, before giving a slight nod to her himself. "Well, if you're ready, then I suppose we should get started. Your parents give you a horse? It's a long way to where we're going, especially on foot."

Actually, he'd sold his horse for booze shortly after getting to the city.

"Although I suppose there's nothing wrong with walking--my horse seems to have been stolen or disappeared since I arrived here in the city, and I doubt your mum and da would be too happy about me looking around for it. So we'll get going then, leaving out the city's east gate and taking the road. Along the way, we can establish a few rules, seeing as you're my charge now and such."

He caught that she'd said "What?", but took that to mean she was confused about his directions, though he still reflexively raised an eyebrow. Typical noblewoman.

"Well don't fret, we're just going to leave out the east gate. Just follow me and I'll explain things on the way."

Brynn looked at Gerard like he was insane. Walk to Fal'Addas? Honestly, she had zero idea of how far that was from here but it seemed like a lot of walking.

"Could we borrow a horse?" She asked with a quirked eyebrow. She also had zero idea of how getting a horse worked. Obviously they could buy one but she did not think she had enough coin for that. Horses were expensive...she thought. She really hated feeling more useless than normal.

I would never let you feel useless, my daughter, the feminine voice said in her mind again. She brought her thumb and middle finger to her forehead as if she was trying to rub away a headache.

"Huh? Yeah...follow..." Brynn nodded and turned to leave the tavern.

What the fuck was wrong with her? She was absolutely losing it. Completely. Daughter? That was not her mothers voice.

"Sorry," she started, "I just seem to have a headache all of a sudden."

Brynn was acting strangely--that much Gerard could tell--and perhaps that was why they had entrusted her to a mercenary. Perhaps it was a ploy to get rid of the woman, to ambush him in his sleep and kill both him and Brynn, to recoup their pay and make it seem like some kind of accident. He'd been hired to perform similar "accidents" while the Brotherhood of the Bow was still around, but his guild had never accepted that kind of work even when money was hard to come by.

"Well, we could borrow one, but we'd have to pay for it lass, and I certainly don't have the coin to rent a horse from Oban to the Falwood. So unless you're willing to... pony... up the money, we'll be hoofing it there ourselves."

The alcohol was clearly affecting him to have made so many horse puns in such a small sentence, so he shook his head a little bit and noticed Brynn leaving the tavern, hustling to catch up to her again.

"If your head hurts, I have no trouble being a silent watchman for you," he said. "After all, they're only paying me to get you there and back, and that doesn't mean I have to jabber until your ear falls off in the process."

They were approaching the gate east out of the city, nearing the stone wall which protected the inhabitants from potential invasion. Outside of them, they would be considerably less safe... he would need to be on his guard, if not for Brynn's sake, then for his own.

The stress of it was making him rather thirsty.