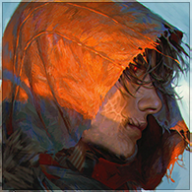 "Hrm." Zivek slowly stood up, glancing over the empty room as a breeze rushed in through the window. Red eyes flickered over the open drawers of dressers and thrown open closet door.

Clothes lay scattered around the floor, a half empty pack on one of the chairs.

It looked as though someone had tossed the room searching for something, but Zivek knew better than that. Someone had run away from here, and in a hurry too. Likely word had come to the, though from where he had no idea. A slight growl of irritation flickered through his throat, and quickly he crossed the room to throw open the door.

There was a loud crash as the heavy oak slammed against the wall, the sound echoing through the Plantation house. His head turned from left to right, nose twitching slightly as he sniffed the air.

He could still catch the scent in the air, though it was barely there now. "A few hours."

Zivek mused to himself with a deep scowl. His gaze flickered through the hall as he stalked towards some of the other rooms, throwing the doors open to find them in a similar state as the first. Another growl of irritation tore from his throat. It seemed that the entire family had run, that would at least make them easier to find.

Lips thinned, gaze casting through the final empty room, and then he began to stalk downstairs. From the wall he tore one of the gas lanterns, throwing it behind himself as he headed towards the front door.
Reactions: Phaedra 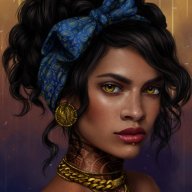 "...Which is why you must take extreme care. You understand, my child?"

"Yes, Collector," Phaedra kept her gaze on the tiled floor on which she was knelt. The Collector was not a King or Emperor but on this isle he might as well have been a God. Everyone who dwelled there had been bought here by him; some willingly, others less. Even still they treated him with the same mix of fear and reverence those in Thagretis had treated their dragon-god.

"Ah the sun is rising, perfect timing," the collection of gold bracelets she wore about her wrists jingled as she finally stood. The Collector never dismissed her formally but she had grown used to knowing what it was the eccentric man really meant. Her boots squeaked as she turned on her heel to head for the door.

"No, Collector," her fingers brushed over the thick golden chain about her neck and then hurried from the room.


* * *
​
The Collector's information had never led Phaedra to the wrong place. He was meticulous when it came to the fine details and they often dictated his choice on who he sent to retrieve his new prize. She had summarised it was the distance from their home that had been the reason he had chosen her. High above the clouds out of view of the world below the phoenix soared. Fire crackled along her feathers when clouds broke upon them and turned them to steam. A part of her enjoyed these moments of her cursed form; it wasn't often she had peace and quiet to herself on the isle.

As he had no doubt expected, Phaedra was able to make the journey in one day with the sun just setting as she touched down a mile or two away from the plantation on the foothills of the mountain. Having a flaming bird soar over your house was a pretty large alarm bell and Phae hadn't wanted the family to know of her presence until after she had spoken to them. From what she had been told, the father might have been willing to sell his daughter for the right price. It was far easier for everyone if that was the root they took.

It seemed on this occasion her caution had paid off in a different manner.

Phaedra arched a brow as she watched from her vantage point as a small family with two servants struggled along the dirt path heading North.

She sighed and began to make her way down.

Why was it never the easy way?
Reactions: Zivek

With the Plantation burning behind him Zivek stepped onto the road to the north.

The scent was faint on the air, barely there, but he could still catch it. In the Bayou humans tended to stand out. They were not part of the usual miasma, and the fear mingled with the family was more than enough for him to pick them out even through the stench of the swamp.

He glanced upward towards the sky for a moment, noting the crescent moon which seemed to hang within the air. A small smile crept onto his lips.

The sound of cracking bone echoed through the night air.

Pain embraced him. It was not something he could ever get used to, not something that would ever go away, but he had come to relish it in a way. It was a sweetness, a touch of ecstasy that marked what he now was. What they had turned him into.

A howl bore through the night air, the echoing call of a wolf that should not have been there. With fire raging behind him, Zivek rushed into the swamp. His claws digging into the mud.
Reactions: Phaedra

Phaedra paused as the howl echoed through the swamp.

The family had vanished back into the thicket. The roads in these parts weren't the sort she was used too with proper stones beneath her feet. This was barely more than pact earth created over time by thousands of feet smoothing a path over the years. Trees still hung down low with its twisting vines hoping to snag wayward travellers and pools bubbled in the murk. The road beneath her feet was just as likely to be bog as it was solid.

Her cutlass slashed through a thicket of vines to clear a path. The silver glinted amongst the vegetation that was alive with the sounds of night. It wasn't just the source of the howl she had to think about. Eyes peered out of bushes or appeared from the pools nearby. She imagined their grins in the shadow and shuddered. Something big must have forced the family to flee through this in the middle of the night.

Suddenly a sword was at her throat.

"Why are you following us!?" the voice demanded. Phaedra held her hands up innocently and settled into the practised routine.

"I'm a traveller, a trader, I was out 'ere lookin' for plants for dyes, see?" she motioned carefully to the satchel over her shoulder. The voice turned into a figure which turned into a man who snatched her bag from her to peer inside. He gave a quiet grunt when he found carefully closed boxes labelled with different colours. "I saw yer runnin' back ter and I wondered if yer were in trouble?"
Reactions: Zivek

Zivek moved through the swamp with surprising agility.

He bounded from one patch of solid earth to the next, leaping and landing in a stunning silence. His paws never hit a branch, his fingers never scratched at the trees. He moved like a shade, darting through the swampy forest faster than any man could have.

His bulk landed upon one of the more solid thickets, claws grasping at the earth as he stopped himself from tumbling forward.

The sound of voices could be heard in the distance, whispers, and something more. Louder. His jowls pulled back for a moment, red eyes flickering towards the sound as he sniffed the air. The family was more clear now, he could pick out their individual scents.

But there was someone else. His head tilted slowly, his mind running through the possibilities. For a moment he seemed to linger, and then he crept forward towards the gathered scents.
Reactions: Phaedra

The soldier posing as a servant slowly put his sword back into his scabbard and hid it beneath his cloak. Very clever, she thought to herself, as the rest of the family melted out of the shadows. Her eyes flickered over the other servant but she didn't spy any weapons on him and from his posture and age he most certainly was the footman. He also seemed to be carrying the biggest pack. She tried not to show any interest when her eyes grazed over the young girl other than to offer a reassuring smile.

"Me name's Phaedra, ah hail from teh Eastern Shores. I been ah-lookin' for new places teh trade 'nd me friend aboard teh Saviour mentioned teh swamp 'ad some in-terestin' 'erbs for new colours," she plucked up a wild bloom to demonstrate and placed it in her satchel. "What is troublin' you nice people, eh?"

"A monster!" The girl confided before her father could shush her. The mother looked close to weeping. Phaedra raised both brows.

"Ah monsta ye say? Is t'at anyting tah do wit tah fire up o'er tat hill der?" she motioned to where the smoke was rising into the night sky; grey clouds against the inky black. The soldier-servant nodded.

"If you can use that steel then I would welcome your help in letting my Lord and his family to safety, Miss."
Reactions: Zivek

The monster stepped through the brush.

A loud crack echoed through the swamp as a tree was shattered, behind it Zivek's massive form stepping through the brush. Bright red eyes seemed to glow within the night, a lashing tongue escaping his jaw as he scented the air.

His steps seemed to thunder within the soft dirt, echoing out as he stalked towards the family. His wolven form was massive, standing twice as tall as the average man and with enough bulk to break down a castle gate on his own.

Even a dozen meters away it was impossible not to tell his size.

Against all other knowledge. Against everything that most knew about Werewolves, the hulking beast spoke. His voice was guttural, distorted, as though a man speaking through a wooden box. It echoed out among the trees, his jaw barely moving. "And the rest of you shall die quickly."