Private Tales Water Over the Stone 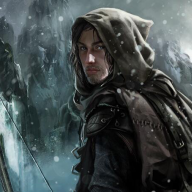 The Spine was an untamed wilderness full of mysteries, long lost treasures, and even more dangers. It was a place of orcs and dwarves, of giants and barbarians, and of beast both mythical and magical. For some it was death and some hard won reward. To Weylin it was home.

It had been some time since Weylin had left the newly constructing orc fortress. His feelings on them was... it wasn't something he wanted to think about now. What he did want to think about was what to do now that the river port city of Glacen was in sight. Well it wasn't so much a city as it was a large town, but he couldn't imagine what the difference would look like. This place was over three times bigger than the largest town he had visited. It seems being situated on the great river connecting Crobhear Lake and the Gulf of Ryt attracted people. Everyone wanted dwarven goods and it was the far easier option when compared to roads through the dense forests and high hills around the mountains.

Weylin began to follow the road down to Glacen. What had his mom said about the town and just places this big? Oh right! Don't believe everything people said and keep your coin purse well hidden. He didn't have any coin so he didn't have to hide his purse. Hopefully they were friendly. Snow seemed to pick up on this. She began to demand attention from him by pushing her bulk into his hip. He frowned down at her for a moment before it just shifted into an affectionate smile. Scratching was her reward as they walked up to the town walls and open gate. 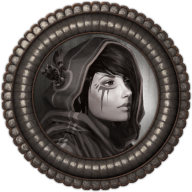 It had been no easy feat to pass over what the natives had referred to as The Spine.

Rugged, unflinching terrain had almost been the end of her on several occasions, and she now sported a few gnarly scars and tender bruises to remember her ordeal by. Cloak and blanket had done very little to stave off the cold, and it was by miracle alone that she had kept all of her fingers and toes rather than losing them to frostbite.

Overhead Tsun circled, and with a boisterous caw came down to land against her shoulder. The raven nudged against her cheek, before nipping at her hair with his slightly curved beak. In response one hand lifted to stroke against his feathery head, and she smiled toward him.

"I bet you're as grateful to be away from there, huh?" she mused. It was nice to feel some modicum of warmth again, to wriggle her toes and not find numbness in place of genuine sensation. They had followed the river down the mountainside, and now up ahead the warm glow of a port town called to them.

Bast patted her satchel, feeling the strange trinkets she had unearthed on her second night on The Spine. Objects she saw no reason for having been left behind, unless someone had made camp and been carted off by wild animals in their sleep. She'd tried to banish that thought, yet whenever she woke to howls and guttural noises in the night it had always flooded back into her mind.

"Stay with me, this once?" she asked of the bird, who seemed to stare at her knowingly. After such an ordeal she did not very much enjoy the thought of being parted from him as would usually be the case when venturing into such a settlement. "I'll treat you to a nice fat field mouse..."

Apparently satisfied with her bargaining chip, Tsun remained perched upon her shoulder as she approached the busy town. It was noisy, and smelly, but that came with all ports in truth. Too many travelers, such as herself, and fish brought in from the river, and merchants shouting their wares from market stalls and ships.

No doubt her voice would be joining theirs soon enough.

So the people of Glacen wanted something called a toll from Weylin at the gate. Who ever heard of having to pay to enter a town? It seemed like one of those con things his mother had told him about. It wouldn't be a big deal to him though even if it was dishonest and unwelcoming if he had any coin on him. Fleeing during an orc raid wasn't really a time when you thought about taking some coin with you. Things just kept getting worse of late.

"I don't have any coin on me. My town was attacked by orcs and burnt to the ground. My mind was on surviving not on coin for some toll." Weylin said with a slight frown on his face.

"I feel for you kid." The guard said. "But no coin no entering. Either you pay or you stay out."


"I'm not a kid. I went through my rites years ago." Weylin said with a scowl. "Is there no other way I could get in?"

"I said no twice, kid." The guard repeated firmly. "Now move out of the way or I'll move you." His hand went to the head of his axe.

Weylin glared at him for a moment then moved out of the way so the other travelers could enter the town. What was he going to do now? If he could enter then he could maybe sell something for coin or even find work, but that was only if he could get into the town. Days and weeks of no people only for the first one he talks with to be this guard.