Private Tales The Dawn of a New Year 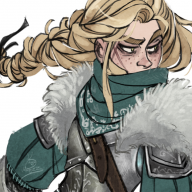 Alani had encountered the Ashlanders several months ago. Having nowhere else to go, she stayed with them. It was nice to be around fellow orcs, though her lineage was very muddled and she did not look much like an orc herself. She was distant and quiet, keeping to herself for the most part and speaking little. Though, she pitched in when she could, she knew better than to be a leach, and hard work was a welcome distraction.

The winter had been cold, Alani was not used to living this high up in the mountains but the lowlands of the spine had been her home so the cold was no foreign concept to her. It was getting warmer now, the ice and snow starting to melt and the earliest of the spring flowers starting to push their way from the cold earth.

Alani wore her usual fur collar but had abandoned the plate mail and human fabrics for the tribal garments worn by most Ashlanders. She welcomed the opportunity to cast aside all ties to her human heritage and their twisted civilization.

She sat outside in the crisp air of morning, the sun comping up and peeking through the pine trees to warm the cold earth. She held a bone needle carefully in one hand as she repaired a torn cloak. This morning there was a special kind of tension in the air, a kind of tingling anticipation as if the air and earth itself knew of the celebration that was to come. The very earth ready to burst forth its bounty at the start of the new year and the beginning of spring.
Reactions: Mabess 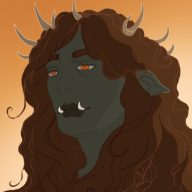 It was not uncommon for Strmcaller Ashlanders to welcome people among their tribe. While most would consider the ashlanders themselves descendants of outcasts, of exiles, not all of their tribes treated outlanders equally. Orcish or not.
The Silverstones were puritan in that way.

It's been at least a few weeks since the tribes once more separated from their communal village of the winter sacred months. Preferring to now live in temporary nomadic settlements that change from month to month.
This was one of those new settlements.
Dosharan, that was its name.

Mabess slowly emerged from her chief's hut, greeting old Gorsgoya who sat on a bench by the exit.
One could only wonder how many more years this ancient she-orc will live.
Her eyes once more peered onto the tired village and it's dying campires from the yesternight's feast.
Seems like Alani Delkera was well awake as well.
»Fare well, Alani? « The chieftainess spoke warmly as she aproached her from the side, her stride proud as it should be.
Reactions: Alani Delkera

Alani paused in her work, as the chieftain approached. "I am well, though sleep has not done me any favors," Alani said, glancing up at the orc chiftain. The orcish woman towered over Alani but the chiftain never made Alani feel small.

Alani looked back at her work, tying off a knot and breaking the thread off with her teeth. She tucked the needle in her waistband and stood, throwing the cloak over her shoulders and adjusting her fur collar so it sat over the cloak.

"How can I help you?" Alani asked glancing back at the Chief, but didn't attempt to look her in the face. Alani had learned early on that that only gave her a sore neck. Besides, eye contact was not needed to carry on a natural conversation.
Reactions: Mabess

»All is well, for now, thank you for the offer« nodded the chieftainess, finding a place to sit on and rest for the while.
A fallen log from when this section of woodland was cleared will do just fine. Only some ash had to be dusted off.

With her massive hand, she brushed aside her thick-curled hair and turned to Alani.
»You've acclimated well to tribal life, do you fare well?« The chieftainess pondered how hard it must've been to set aside an old way of life, though she could never truly know how Alani felt with the ashlanders, only guess.

Alani's lips parted in a smile, her little tusks showing. She had smiled little when she first came to the Ashlanders, and laughed even less, but now with the coming of spring and a new year her heart felt lighter then it had in a long time.

"I've been made to feel all the more welcome by your hospitality," Alani said. She then looked out at the many houses as more tribesorc's started to emerge to get the day started. "I used to live with my family in the forests of lowlands of the spine on the east side. The land was sacred to us and we protected it..." She grew quiet for a moment and her face fell. She continued, turning the conversation away from her old home, "I understand tribal life better than the ways of the humans in the big cities to the west." She glanced down at her hands, as she fidgeted with a stone that hung on a cord around her wrist. "I traveled there for a time but they had no respect for life." Alani glanced back up at Mabess, "Here things are simple, here they make sense."
Reactions: Mabess
You must log in or register to reply here.
Share:
Facebook Twitter Reddit Pinterest Tumblr WhatsApp Email Link
Top Bottom