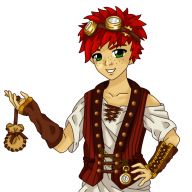 Urchin awoke in an unfamiliar room and let out a loud groan of pain. It wasn't unbearable pain, but the kind of aching pain that comes complete with a state of complete and utter exhaustion that no amount of sleep can satisfy. How long had he been asleep anyway? More importantly, where the hell was he. Urchin assessed his surroundings... The Raven Club! Yes, he vaguely remembered stumbling up here last night. God, he must've been really drunk to be so hungover this morning... No. Not drunk. Injured. He remembered now! There had been a fight. A battle even. Charity was in trouble and... Bloody hell, he'd been stabbed! His mind scrambled for the memories of last night. Charity was okay! He breathed a heavy sigh of relief remembering that. There had been a lot of injuries inflicted but everyone was alright. He'd gotten the worst of it, but he was fine now. Surprisingly fine, actually. Considering he had almost died last night, it was a miracle that all he had suffered was an aching body and a state of complete exhaustion. But Eilerias had healed him, hadn't she? That must be why he felt so much better now. The bleeding had completely stopped. Was there even a scar?

Urchin checked himself over. It hurt to move, but he had to make sure there was no permanent damage. Patting his hand over the area where he'd been stabbed though, he found the area rather sore and tender, but there was no more bleeding and no scar from what he could see. Most of his injury was covered by his bandages though, so he couldn't... And that's when it hit him. No blood. No blood anywhere. His bandages had been changed! His hand instinctively went to the tattoo over his collarbone. Someone had seen. Someone knew. Who?

Charity? ... No. Eilerias! She had been the one to heal him. Urchin had kept trying to pull away, but Eilerias had insisted. He finally managed to pull away to the bedroom, assuring her that he just needed rest, but that obviously hadn't stopped her. She must've healed him while he was asleep. Damn it! She must've seen. That meant she knew! Knew who he really was! Had she told anyone? He had to find out! If she had told the others... Damn it, it wouldn't be long before the whole world knew! And then what would happen to him?

Ignoring his aching muscles and how utterly drowsy he still felt, Urchin darted out of bed. Eilerias had been kind enough to leave out fresh clothes for him. Isak's, probably. Too large for him, but still very considerate of her. Stumbling his way down the stairs, he found the bar empty save for Ogden and Eilerias talking over a cup of tea.

"Uh..." the lad muttered, nervously rubbing the back of his head as he tried to figure out how to approach the subject. "Mornin' Miss Eile. I... Thank ya for 'ealin' me last night. I'm feelin' much better. Sorry fer kickin' up a fuss an' bein' such a brat." He spoke to Eilerias but it was Ogden he was looking at, trying to read what he could in his experssion. Had his opinion of the boy changed? Had Eilerias told him? ... No. No, there was nothing to suggest that he knew anything whatsoever. Was it too much to hope that she hadn't told anyone? Not even Charity?
Reactions: Charity Briarthorne and Eilerias 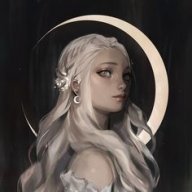 Eilerias sat in the bar within the Raven Club, fiddling nervously with the handle of her teacup. Ogden sat across from her, though she had tuned out most of what he was saying. She smiled, accepting his barrage of congratulations that had for the most part not stopped since the previous night. She knew he was excited that she was having a child, probably because it might mellow out his boss. She, on the other hand, was terrified. She didn't want children of her own.

"Are ya alright, Miss?" Ogden interjected, pulling her from her thoughts. "I don't think you've been listenin' to a bloody word I've said. I can't blame ye, I know you're excited!" The dwarf smiled before taking a big gulp of ale from his teacup.

Eilerias nodded, "I didn't get much sleep." She yawned. "It's been quite an eventful night." She ignored his excitement and sipped at the tea Urchin had got her the previous night. The pair continued to make small talk until Urchin came down.

"Good morning, Urchin!" Eilerias made her tired voice a bit more cheery to welcome the lad. "Ogden, get him some breakfast, okay?" She shooed Ogden away before beckoning Urchin to take a seat. "It's quite alright, love. It is my job to heal people!" She laughed quietly.

She looked him over, noticing that he seemed...uncomfortable...maybe nervous. "Are you alright?" She asked, tilting her head to the side and squinting. "Something feels off. Are you hungry? Thirsty? Still feeling rough?" She questioned as Ogden brought out plates of food for both of them. She waited until the dwarf had returned to the kitchen before leaning in. "I'm sorry." She said quietly, meeting his gaze. "We all have our secrets. I won't say anything, but I have to ask: does Charity know?"
Reactions: Charity Briarthorne
You must log in or register to reply here.
Share:
Facebook Twitter Reddit Pinterest Tumblr WhatsApp Email Share Link
Top Bottom