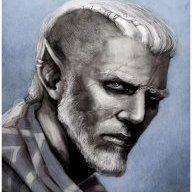 Jazat's opinion of Alliria... was that it had an awful lot of wealth on display in places that would have had said wealth been stolen immediately had the city not been so heavily watched. It was odd to see so many different types of fighters in one place and not actually have a fight be ongoing - though he supposed that policing both the city and the Reach counted as something of a battle.

To say nothing of the shallows.

Still, a heavily armoured drow walking into town still picked up some buzz. He was a little bit annoyed about it honestly but he did nothing to display his displeasure at the way several people literally stopped and stared. Was it so strange to see a heavy armoured elf? Probably was a little bit unexpected but nothing too far, too fantastical, but he supposed it was different.

He wasn't really an elf was he? He was a Drow, a Dark Elf, and that meant that he was different, dangerous and new to these people. Hopefully that would translate to some business or interesting developments down the line.

Because right now it didn't translate to much of anything but some pointing and...

Did someone just throw a rock at him?

Indeed, a small gang of six peasant thugs were approaching, throwing rocks as they did so. The rocks in question just bounced off his armour but still - it was the thought that counted and right now the thought that counted was racism against Drow. Considering the habits of his Drow 'betters'? Well slavers weren't traditionally welcomed by the common people.

With a sigh he drew his sword, a longsword that shone brightly in the evening light. The thugs paused for a second.

"If you want to start a fight, don't be surprised when someone gives you one. Now - is this going to be a problem?"
Reactions: Ipatiy Kozlov 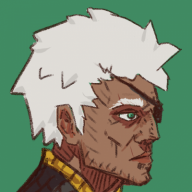 "That'd be... five copper." Said the old bun peddler from behind his tomato of a nose.

Garrod eyed him with his tired green eye, looked down at the hot sweet bun he held in his hand, and nodded. His free hand quickly produced a handful of old copper coins, and he handed them over to the bun man. They fell from his hand with soft and joyous clinks.

And their little song seemed to widen the peddler's smile. "Thank you kindly," he said with a nod.

Garrod gave him a single nod, and promptly stuffed the fresh, still steaming sweet bun into his mouth, and as he chewed the sticky warm honeyed dough, still fluffy and moist, he decided he had spent five coppers very well.

"If you want to start a fight..." came a voice in the nearby distance. Its gruffness and readiness snatched Garrod's attention, and when his eyes found to whom the voice belonged, he saw a lone drow, facing off a band of street toughs with naked steel in his hand.

He took another bite of his sweet bun, and watched, curious to see how things would all play out. 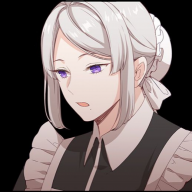 The reach was always a nice place to visit, it's central location on the continent made is a trading hub that contained a little bit of everything. From rare eleven wears to crude but interesting orc goods Allaria was a treasure trove of interesting things and after her last 'job' spending some times around the markets wasn't a bad idea.

It was fun to brows, perhaps find something you didn't know you wanted, but it also gave her a chance to keep her up merchant game with local prices. Half for personal reasons and half for other applications, magic didn't come cheap for the entrepreneurial maid.

With her eyes and ear scanning for anything out of the ordinary it didn't come as a surprise when she noticed a certain armored drow facing down a gang of... soon to be corpses.

Maybe the thugs would have stuff worth stealing once Jazat had killed them all, not like anyone would miss them.

Racism was not something new to Jazat but it was something he was already growing tired of. Hopefully throwing rocks at him counted as assault by the laws of this city - if it did then he would be justified in calling it self-defense when he killed them.

... probably best not to kill them for that exact reason wasn't it?

"Do you want to run back to your mothers now or after I've broken some bones?"

"Ah, I see. You're motherless guttershites."

One of them grew angrier than the others at this insult (probably a motherless guttershite) and came at Jazat swinging a club. Blocking the club with his armoured left forearm, the enchantments built in meaning he felt nothing at all, Jazat brought his sword around quickly.

Rather than using the edge of the blade however, he slapped the flat of the blade against the man's temple, disorientating him before he laid him out with a knee to the groin. Spotting someone he kind of knew in the crowd, he pressed the tip of his sword against the downed man's form.

"Maid!" he called out to Ipatiy, "Is it legal to kill people for assault in this city?"

Garrod took another bite out of his sweet bread. He was pretty sure it was not legal to murder a man for throwing a rock. A club... well, maybe. If you were the right man and the sort who swung at you with the club was the wrong sort of man. In this case, Garrod thought the stout armed Drow was, regrettably, the wrong sort of man. And he could hear the guards hollering from down the way, pushing past the crowd who had begun to gather around the spectacle.

"Oi, that filthy dark walker is going to stick mi mate Brambello!" one of the crowding city folk called out. Said man promptly grabbed a nearby rock and tossed it at the Drow.

Garrod, well, he took another bite of his bread, the last bite in fact, and he calmly moved to the guards. He was a large man, and in his armor. Not the full set, but even in his leathers he was an imposing enough figure. Imposing enough to still some of the brave spirits who were ready to jump in and defend the crusty street toughs against the scary drow.

Garrod raised his hands up in a sign of peace and motioned for calm. "May not be illegal, friend," Garrod began. "But you sure as shit won't get justice if you spill the man's blood," The other street toughs seemed to gather themselves up, and the crowd watched with a mix of excitement and anxiety. "Let the fool go, and let's move on with our day before more trouble brews here." In the distance, there came the rattle and clink of armor and spears on the march. Likely guards on patrol.
You must log in or register to reply here.
Share:
Facebook Twitter Reddit Pinterest Tumblr WhatsApp Email Link
Top Bottom