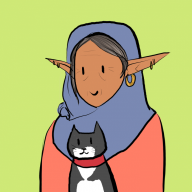 It was an average morning in Maraan. Busy merchants were setting up their stalls and shop, assistants and interns were working hard and hurrying, placing the right goods with the correct prices.

In a mashrabiya, overlooking the main street, an old elf was sorting her documents. Despite still dressed in her night gowns, she had an elegant air to herself while she singed the docyments with a cat lazyly napping on her lap. Off to the side her personal aid Raha was putting away the documents that were already finished. The old elf, named Janan Hanif leaned on her chair with her hand under her cuhin, "Raha, the Sahan building was rented out to someone who planned to make a cafe, right?"

"Yes. About a week ago now," reserved Raha answered as she placed away the last documents handed to her by Janan.

"A week. Must be enough to have set it up by now, right?" She stood up from her chair and went to get dressed, "It's only proper that I go and check up on how it's business is going."

With a headscarf covering her graying hair she headed out accompanied by Raha and a tuxedo coated cat. She walked on the main street, many stalls already begining with their selling of goods, heading down a side street, shaded by inticrate latice work with vining plants scurrying over and through it. She stopped at a building where a boy was setting up tables and chairs infront of it. It was her Sahan building.

"Is the cafe already opened?" Janan asked the waiter boy, who a bit flustered nodded in reply. She then entered the tastfully decorated cafe.

A few musicians in the corner were readying their instruments to play, and some customers were already inside enjoying coffee and pastries. Janan and Raha sat down, the well dressed cat immediatelly jumping into Janan's lap. The two ordered coffee, with which a few barazeks were seemingly always given as a complimentary addition. As they waited for coffee Raha asked about the various food options that were offered in the morning, and Janan Hanif looked around for any obvious forgieners. She does quite enjoy their tales.
Reactions: Ermengarde and Zufar el Hassan 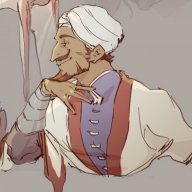 He might have not been an obvious foreigner, but if one was observant enough, their might have been clues that he was an outsider. Specifically, he looked to be a man of the seas rather then a man of the desert, though his dress style certainly was flavored like a desert. The most prominent feature was his scimitar hanging from his belt, but along with that various viles, filled with liquids of varying colors. Only the most observant of people would question it; any other passerby would gloss him over, probably as a some merchant or another.

The man was leaning against his chair, his feet crossed, popping to the side of the table. The man was relaxed, a book hand and a cup of tea in the other. The book was titled Security and Liberty, which seemed to be driving a rather fascinated man...a soft yet concentrated expression...as he took a sip of his tea once in a while.

In relation to the room, he sat rat next to Janan, appearing to be minding his own business. On the table itself, was a plate with a few of the local desert pastries. The man seemed to have bitten into one of the snacks, though the rest lay untouched.

The tea cup came up again, followed by a sip, before the cup came back down again...
Reactions: Ermengarde and Janan Hanif

The coffee arrived and Janan leaned closer to the man while taking a sip of the strong coffee. Her eyes followed the sentences in the book and finding it good she spoke up to the man with her calm voice and warm smile, "It's a good book, would you care to tell me it's author, or where you got it from?"

Close by Raha was trying to quietly argue that soup was indeed a breakfast food and she should be allowed to order it.
Reactions: Zufar el Hassan

"Hm?" The fellow mused, taking a moment to finish the sentence that he was on, before casually turning his attention to the sand elf next to him. "This?...A fascinating book, but some may say it is among the more dangerous of collections in existence..."

Said individual gave the lady next to him a quaint little smile, before tilting the book back to look at the cover. "...an old friend of mine wrote it...he has a knack for such things, who would of guessed?...Though he rarely publishes his work across the continent...too much for the censors to cross over, to many dangerous things to spreading it around...we're talking things with the potential powers to change the world as we know it...if the circumstances were right..."

The man gave the elf a knowing grin, before sitting up further up in his chair, acting as if he was flabbergasted.

"Ah, but where are my manners? Spouting out proposals to a mere stranger! Please forgive me!..." The man bowed his head, glancing up in attempt to meet her eyes with another grin. "...My name is Zufar...it's an honor to be of your acquaintance..."
Reactions: Janan Hanif

"My, what a shame, the book really piqued my interest..." she took a sip of her coffee and leaned back into her chair, "I'm against book censors, the people themselves should decide what to follow what to read, they should be smart enough for that, right young lad?"

"Zufar, that's a nice name for a young man like yourself. You may call me Janan Hanif, a honour to meet you aswell," the old elf didn't seem bothered at all, sipping her coffee with one hand, and the other on the cat in her lap.

"This here is my aide Raha," She gestured at the dark lady who just finished talking witha waiter and gave them a nod, "we live in Maraan, for quite some time already, but where have you come from? That's the fun thing about this place, fidning out about all the people that come and go and where to."
Reactions: Zufar el Hassan

"Really now? Not many people would say so, hehe...most would call it "boring", people today prefer the action and romance of a good adventure...not that I'd disagree on the fact that they'd be entertaining...but one must be sharp on wordily affairs, yes?" Zufar smiled. Not often did people take an interest in the books he read. His crew mostly didn't find that much interest in it, and most others were too intreasted in how he looks then what he read. Rather refreshing, actually. "...*sigh* if only the world shares our opinion...books can be the dangerous weapons against a ruling governance...but I suppose one who wishes to maintain control by force, must also control the thoughts of those under them..."

Zufar suddenly closed his eyes and began chuckling to himself, before lightly opening them to face the sand elf. "There I go again with the rambling....I do apologize, must be tired today...I've been traveling for a while...actually here for the coronation at the capital...a new emperor among the dunes...exciting stuff..."

There was more to it then the man let on, but it was hard to really tell from his posture; it was clear this fellow kept cool under the circumstances. Instead, he turned towards the cat, testing his waters as he cooed.